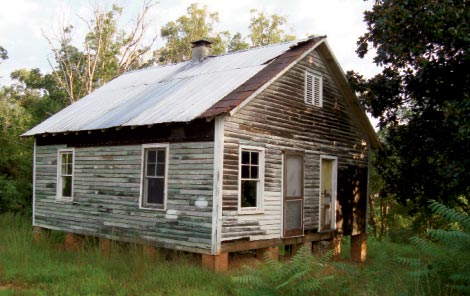 The late jazz, soul, and civil rights powerhouse Nina Simone was born in Tryon in 1933 and recognized early on as a musical prodigy. But she ultimately spent most of her life far from the area that hatched her celebrated career.

And her first home, a spare and timeworn structure at 30 East Livingston Street, has become a mecca for some of her fans, even as it has faced potential abandonment and destruction. Now, though, it appears destined for a rebirth.

Late last year, a Kansas-based preservation company, Nineteenth Century Restorations, announced plans to carry out a complete makeover. The house is slated to join a series of restorations of humble birthplaces of American greats, including Johnny Carson, Woody Guthrie, and Mickey Mantle.

The house’s current owner, former county economic planner Kipp McIntyre, has strived for years to “protect, preserve, and share” the house, he says, but he was pushed to the brink of selling the unfinished project until the restoration offer came along. Now he’s launched a nonprofit corporation that will steward the Simone birthplace through its rehabilitation and beyond, as it becomes a museum saluting her origins and legacy.

Stony Knoll Community Library
In 1937, Della Jackson, an African-American educator in Mill Spring, launched a center of knowledge and community. Her library for isolated folks evolved to include summer camps, day care centers, and multipurpose meeting spaces, becoming one of WNC’s enduring outposts of self-sufficiency during trying times. The Stony Knoll Community Library, at 3508 Fox Mountain Road, recently celebrated its 75th anniversary with a series of renovations.