The Hear & Now: Twenty years ago this month, a little community radio station in Spindale started making a big noise 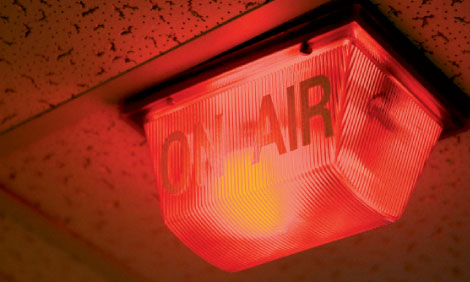 There’s a sign posted over the door handle to WNCW’s Studio B that reads “Pull Hard,” and they aren’t kidding. It takes a jerk of the upper body to actually break the heavy, sound-proof door loose and gain access to the room behind it. Inside, Dennis Jones is getting ready to host his first live performance of the day. Before the band arrives, he already knows how many members there will be, what instruments they will play, and where each one of them will sit. Each microphone has its own individually colored “snoopy nose” cover that matches the color of its respective audio cables, which Jones coils neatly at the base of each mic stand. Even the chairs match the microphones. The colors coincides with a series of controls at the soundboard, so that Jones can quickly reference each musicians’ levels when they play live.

You’d think that he suffers an acute case of type-Aism, but in truth, he’s been hosting live performances here long enough to have this down to an exact science. He also used to work as the sound engineer for some of the biggest international touring acts of the ’80s.

“I see one or two bands a day, three days every week,” (http://www.wncw.org/StudioB.html) Jones estimates while rolling his wheelchair to another part of the studio, carrying a panel covered with sound-deadening material. “That’s about 3,500 individual musicians every year.” There’s a little part of him that’s bragging, but he doesn’t play it as such. He doesn’t need to, because he knows there aren’t many radio stations in the country that can keep up with what he and his colleagues produce on a daily basis. Every afternoon between Wednesday and Friday, these musicians—whether they’re regional acts or nationally touring bands passing through—find their way to the rearmost building on the Isothermal Community College campus in Spindale, seeking airtime on one of the country’s preeminent Americana and Triple-A radio stations.

Today The Black Lillies (http://www.myspace.com/theblacklillies), a young band from Knoxville that specializes in a slightly bluesy interpretation of old-time country, who are taking the studio. As they load in, Jones welcomes each musician and points them to their respective spots. They plug in, tune up, and practice a few songs in preparation to go live around 1 p.m.

Like Jones’ show, the entire radio station is an anomaly in its industry. Where commercial radio has honed its markets and sounds down to a needle-sharp point, WNCW has cast the net wide—pioneering an unusual format for 20 years.

Testing...1, 2, 3
In 1989, chief engineer and technical director Jim Liverett finished installing WNCW’s antenna atop their tower at Mount Mitchell in time for the nonprofit station to debut in October. “Actually, it was an old oil derrick that had been converted into an antenna,” says Greg Hils, WNCW’s first program and music director. The college acquired it from Billy Graham’s radio network. “Originally when we threw the switch, we were reaching into Kentucky, Atlanta, and along the spine of the Appalachians,” says Hils. And it carried to the west side of Charlotte, too—an unusually long range for a small 17,000-watt transmitter. “But when you put it up over 6,000 feet, that signal runs like a monster.”

They started playing a format of music, called Triple-A, that was just starting to catch on at a few college and community stations across the country. In music industry parlance Triple-A translates to adult album alternative. This was the radio station that could spin Bob Dylan, Cowboy Junkies, Bob Marley, and David Byrne in a single set—and they weren’t aiming to play the mainstream hits, either. DJs were encouraged to look deeper into each album for the songs that rarely got airplay but held listener interest.

“This is radio that exists in only a few places like WNCW. We’re still making it from scratch,” says Joe Kendrick, who hosts daytime programming, a talk show, as well as trains and coordinates about a dozen volunteer DJs to cover the station’s late-night hours. “A normal commercial station today might play about 500 different songs. We’ve got over 20,000 discs in our library.”

In the early 1990s, audience interest in roots music—Celtic, reggae, and other ethnic forms—and Americana music was slowly growing locally and nationally. Many former country listeners, turned off by the increasingly commercial sound of Nashville that became popular in the ’80s and ’90s, were looking for something that sounded more authentic. And classic-style country, blues, folk, and bluegrass had the desired grit. It’s no coincidence that WNCW, whose staff consists of many on-air personalities who grew up listening to local pickin’, quickly became a nationally respected force in this revivalist genre, too.

The two-foot-tall stack of CDs on music director Martin Anderson’s desk is proof of the station’s clout. “I get about 50 new releases every week,” he says, “and I give them all at least a quick listen.” Out of those, maybe 10 or more will make it into the new music rotation and eventually into the station’s collection.

A recent online poll asked station listeners to pick their top 100 albums of the last two decades. Even WNCW’s staff was surprised by the results. Number one was predictably Bob Dylan. But the number-two band was North Carolina’s own Avett Brothers, who came in ahead of other top-100 acts like Alison Kraus, Grateful Dead, Neko Case, The Beatles, John Prine, Frank Zappa, and Wilco. Other Tar Heel performers like Doc Watson and Acoustic Syndicate figured prominently in the vote, proving that listeners’ tastes lean heavily toward the sounds of this area.

In fact, WNCW’s Saturday bluegrass show, Goin’ Across the Mountains, was found by the ratings agency AudiGraphics to have higher listener loyalty numbers than public radio weekend mainstays Car Talk and A Prairie Home Companion.

Community Radio
Many of the current full-time staff started as unpaid volunteers. Jones came in one day at the urging of a friend to help answer phones during a pledge drive about 13 years ago, and was immediately recruited to help run the soundboard when another engineer didn’t show up. Kendrick, having previously been on the radio while attending college in Chapel Hill, began volunteering regularly.

Whitehair estimates that they receive the help of between 100 and 300 volunteers throughout the year. Some host their own shows, others are happy to come in and stuff thank-you letters from fund drives—the ubiquitous weeklong fund-raisers synonymous with public broadcasting. It’s the time where hosts, volunteers, and management alike ask listeners (say it with me), “If you like what you hear on this station, please support it with a donation.”

Staff found themselves making that pitch more often than usual this year, as state funds to community college radio stations were eliminated. For WNCW, that meant a $200,000 drop in their operating budget—about one-sixth of their total operating costs. Even as a leader in its field and just about to celebrate it 20th anniversary, WNCW is not immune to a weak economy.

To counter such a devastating blow, Whitehair arranged a third emergency summer pledge drive—normally the station conducts only two per year. The listener response was tremendous, generating more than $140,000 in just a week. Unfortunately, the station still had to layoff four full-time staff members. The announcement came just one day before this interview.

“Now we must raise at least that additional amount of money in our fall and spring pledge drives to maintain­—because that state funding is not coming back,” says Whitehair. “But a station with the coverage area of WNCW featuring this one-of-a-kind programming—not just playing music, but celebrating it—should be able to achieve that.”

In the station’s corridors, everyone is working at a fast pace. Anderson volunteers at the last second to be the host for The Black Lillies’ live broadcast, and rushes to Studio B with just a few minutes to introduce himself to the band before the mics turn on. At one o’clock, Kendrick is back in the main broadcast studio and turns control over to Jones who’s got the band ready to play. After a brief on-air chat, the band starts their set, which is broadcast to thousands of listeners across the Carolinas and all the way to their hometown in Knoxville. Around four o’clock, there’s another band sitting in the multi-colored seats, getting just the same treatment.

As has been the case at WNCW since Liverett climbed that old antenna at Mt. Mitchell 20 years ago, the show must go on.