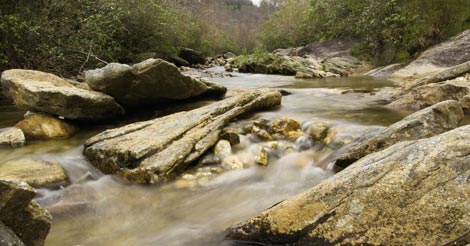 By its name alone, Graveyard Fields doesn’t invoke images of meandering streams, splashing waterfalls, hiking trails, scenic views, or great camping spots. But that’s exactly what motorists on the Blue Ridge Parkway see when they stop at Milepost 418. The dense evergreen forest, common along the parkway opens up to enchant visitors with an alpine-like meadow, where blackberries, blueberries, and gooseberries abound, and pink and purple mountain laurel and rhododendron bloom.

Bordered by Graveyard Ridge and the Yellowstone prong of the Pigeon River, the high valley got its name from the moss-covered tree stumps that once dotted the 350-acre recreation area, and gave it the appearance of a graveyard. No one knows for certain what felled the trees, but two theories exist. One is that a windstorm swept through the valley several hundred years ago, uprooting the spruce-fir forest and leaving behind the stumps. Another theory suggests that logging in the early 1920s was responsible for the landscape. But neither theory explains why the woodland hasn’t returned to its natural state.

What is known for certain is that on the eve of Thanksgiving 1925, a fire burned approximately 25,000 acres reaching from the Little East Fork River to Sam’s Knob and as far as Black Mountain—an area that encompasses Graveyard Fields. Bill Bradley, who oversaw Suncrest Lumber Company’s timber operations in the area, reported that 1925 was a very dry year. The thousands of acres that had been cut by Suncrest, and the eight million feet of timber that sat waiting to be hauled to the sawmill created a highly flammable debris field. The dry weather coupled with the slash and felled logs kindled the fire, which burned so hot it sterilized the soil.

Randall Burgess, a retired district ranger for Pisgah National Forest, explains that a spruce-fir forest has a layer of organic material on its floor. The fire burned through the duff layer down to mineral soil, depleting necessary nutrients for regrowth. The soil sterilization and another fire in April 1942 interrupted natural succession, leaving Graveyard Fields in a brush-shrub state.

Today, motorists vie for parking at this popular parkway stop. Although the view bears little resemblance to the original landscape, Graveyard Fields offers proof of nature’s astounding ability to heal.