Hang Time: Take flight in WNC with a hang gliding (or paragliding) adventure 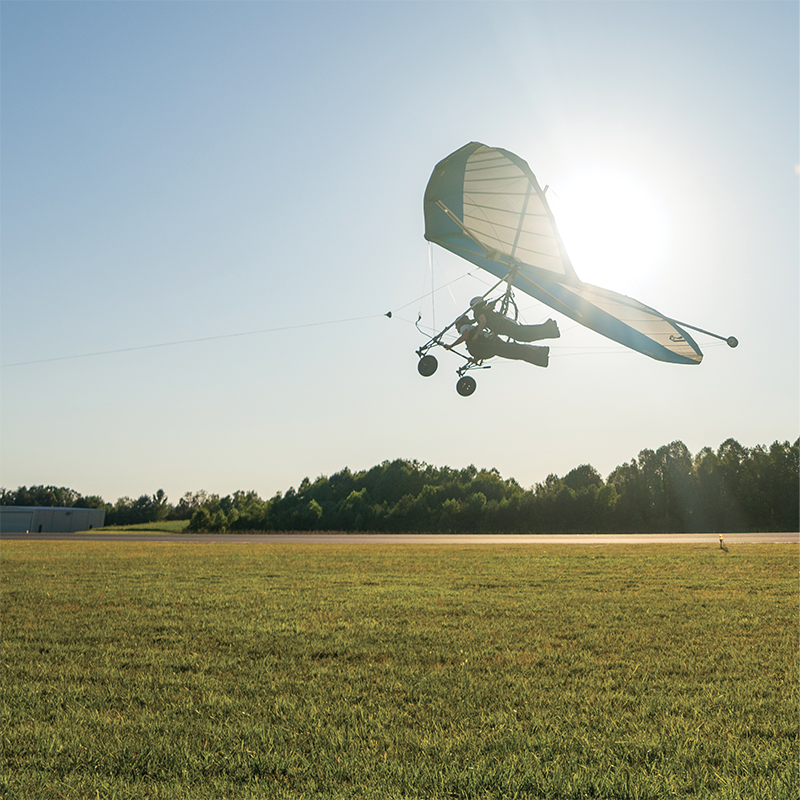 Comfortably tucked into the top harness of the tandem hang glider, I’m cued by the pilot, the vivacious Craig Pearson, to start singing. The ultralight tow plane, which looks curiously more like a giant dragonfly with a joystick, takes off down the runway of the Foothills Regional Airport north of Morganton. As the hang glider picks up speed, I kick up a terribly bad rendition of the Rocky theme song, “Gonna Fly Now.” It’s a triumphant if not comically noisy takeoff.

Within seconds, we’re off the ground and weightlessly buoyant, slowly climbing higher and higher, circling the airfield. There’s little wind on this summer evening, so the skyward ferry is smooth and effortless. My nervous tension begins to ease and a wide permanent grin settles on my face as I take in the rose gold-tinted surroundings—Grandfather Mountain and Table Rock to the north, the Catawba River and Lake James to the south, the South Mountains east, and those beautiful blue ridges westward as far as the eye can see.

Topping out at around 2,500 feet, Craig and his tow pilot, Larry Falls, a cheerfully animated man and former naval aviator by the nickname “Lightening Larry,” communicate via headset radios. When the signal is given, Craig releases us from the towline and we’re on our own—no engine, no brakes, no steering wheel; just a variometer (used to measure the rate of climb and descent), GPS, and a 35-foot wingspan aerodynamically designed to resist the pull of gravity.

The tow plane drops away in an immediate spiraling nosedive. It’s explained that the plane needs to maneuver quickly out of the way to avoid sending any prop wash, or turbulence from the propeller, in our direction. We catch a little of the prop wash, leaving us bouncing over the turbulence. But it subsides quickly and then we’re in free flight, afloat on warm rising air and breezes as we begin our graceful descent.

If you’ve ever wondered what it would be like to fly like a bird, this is it. It’s exhilarating, to say the least. And for people like Craig, a certified instructor with 30 years of experience and several thousand flights under his belt, it’s a long-time passion he enjoys sharing with others through his hang gliding and paragliding company Thermal Valley. It’s a small operation run by Craig and his wife, Laura, and it’s only one of a handful of flight schools like it on the East Coast that offer tandem flights for beginners and training and certification for those wanting to soar on their own. 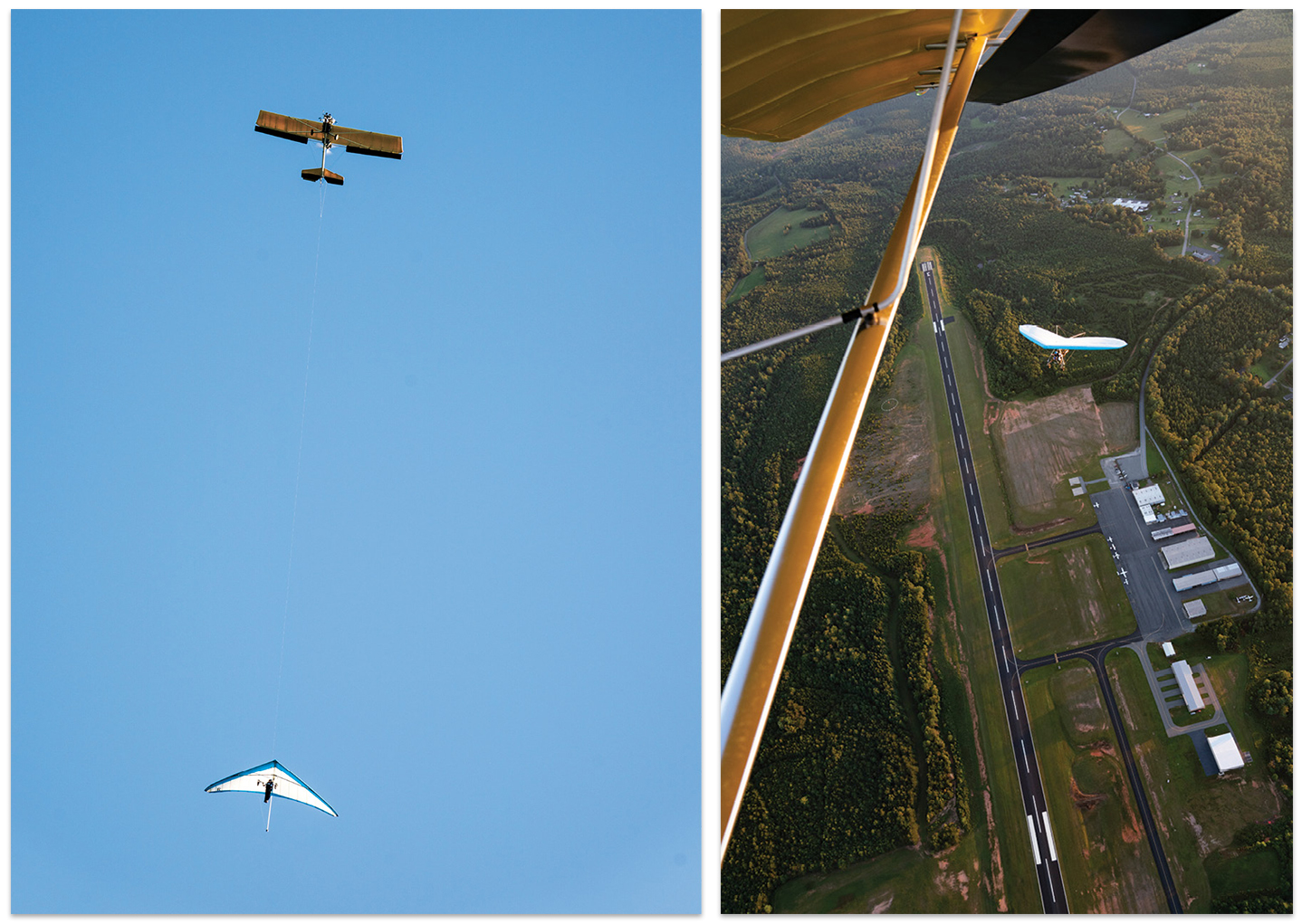 (Left) Easy Ascent Aerotowing is one method of takeoff. Others include scooter towing and foot launch. Ideal wind conditions for takeoff and landings are between five to 20 miles per hour.; (Right) View from Above The ultralight plane is merely a frame with wings and an engine, offering gripping views of what lies below. The tandem flights offered by Thermal Valley fly at altitudes between 1,500 and 2,500 feet, though hang gliders can reach heights of well over 18,000 feet.

Flying the Skies Over WNC

Craig’s fascination with hang gliding began as a youngster growing up in the shadow of Hibriten Mountain. The 2,200-foot peak in Lenoir has been a popular foot launch (whereby one runs off of a slope and into the wind) for the local Buzzard Club, a group of hang gliding and paragliding pilots.

“I was 14 when I saw my first one. It was so high it looked like a tiny little speck but it was flying like a bird,” says the blue-eyed 57-year-old in a drawl that sounds uncannily like Matthew McConaughey. “But it wasn’t until I was 30 that I took my first flight with Kitty Hawk Kites from Jockey’s Ridge sand dune.”

In North Carolina, Kitty Hawk is synonymous with hang gliding. It’s home to one of the world’s largest hang gliding schools, and is, after all, the birthplace of aviation. But during the ’70s and ’80s, Western North Carolina attracted some of the world’s best hang gliding pilots, drawn to the ridges and mountain peaks, where in addition to thermals—rising columns of warm air—the effects of ridge and wave lift are prevalent. That’s when wind hits an obstruction (or a ridge) and is deflected up and over. It’s these meteorological occurrences of rising air that keep a hang glider aloft for as long as the wind blows. Chasing thermals can sometimes allow for cross country flights of a hundred miles or more and up to altitudes of around 12,000 feet on the East Coast.

Grandfather Mountain was a particularly popular gliding destination from 1974 until ’87, during which time it hosted a hang gliding team, the Grandfather Mountain Flyers, which held many exhibition flights and even an annual international championship competition. In addition to the rise of the younger sport of paragliding, it was a tragic accident, coupled with evolutions in kite design, which took flyers farther afield from spectators, that led to the end of flights at Grandfather, though remnants of the region’s hang gliding history remain.

Nowadays, a reunion is normally held in late July on Grandfather Mountain, and a hang gliding and paragliding competition, the Tater Hill Open, takes place around the same time near Boone. But for anyone wishing to take a tandem flight in these mountains or learn on their own, Craig’s Thermal Valley is it.

Anyone new to hang gliding should first fly tandem with a pilot. Although it’s considered a relatively safe sport, this isn’t a ride you can expect to do solo without a fair amount of training.

In the US, solo pilots like Craig go through a gradual, standardized training program sanctioned by the US Hang Gliding & Paragliding Association—the equivalent of the FAA for airplane pilots. Ground school, which involves around 10 lessons and takes three to six months, covers every aspect of piloting, from equipment basics to wing and wind dynamics to takeoff and landing. For those, like Craig, who go on to become instructors themselves, the training is much more rigorous, involving a minimum of 200 flying days and 300 flights.

Pilots must also be very well versed in micrometeorology, involving the study of atmospheric and weather conditions nearest to the planet’s surface. They must understand and be able to read and navigate changes in air pressure, thermals, wind speed, clouds, and so much more.

“Craig makes it look like he’s not doing anything,” explains Laura, “but there’s so much judgment in how fast to come down, where the wind currents are, how to land safely with the wind current, etc.”

To pilot a hang glider, or any kind of engineless glider, is no small feat. But for a tandem newbie like myself, there is safety and security in the blissful ignorance of having to do nothing more than just enjoy the ride. 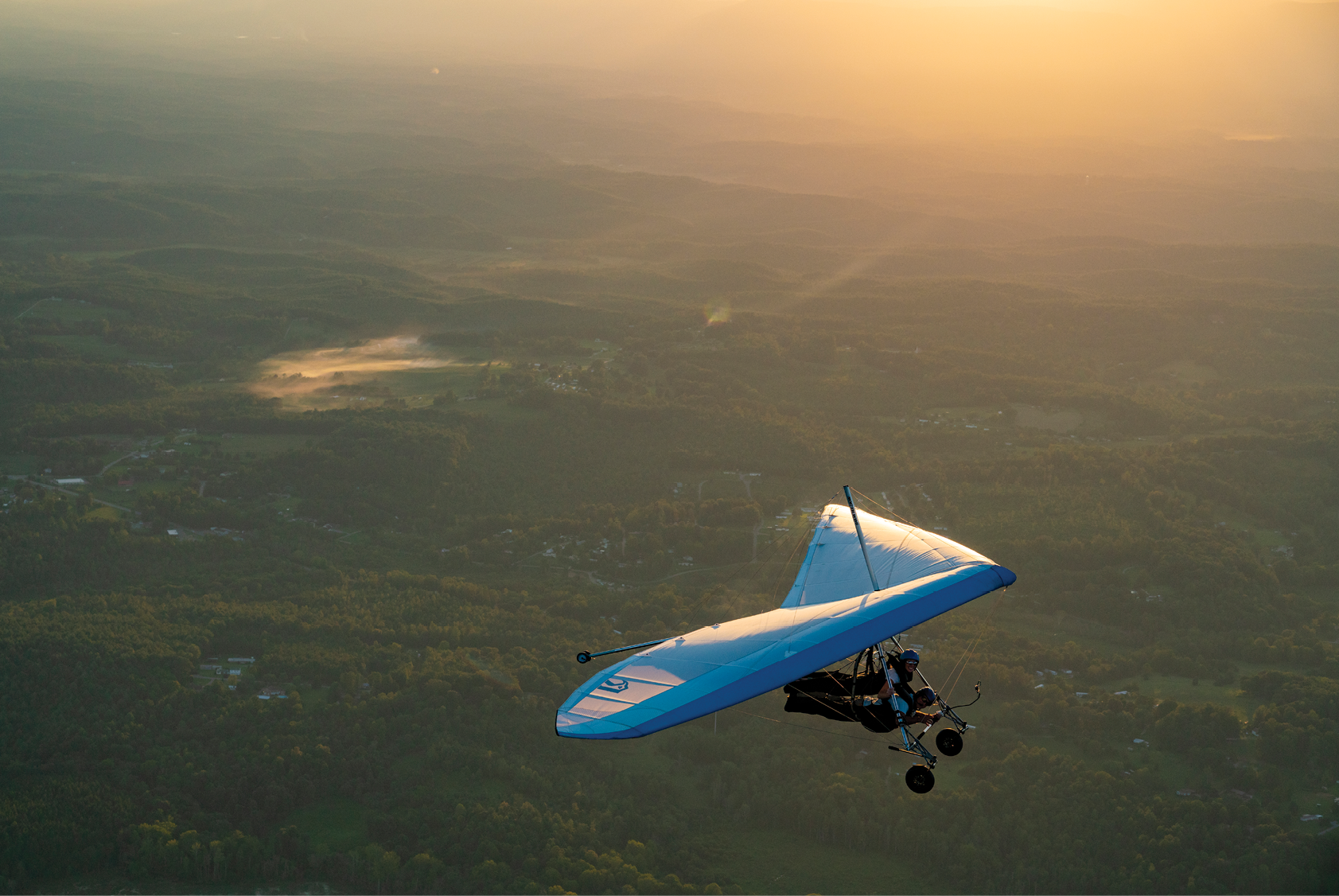 Joy Ride Hang gliders can fly at any time of the day, so long as the wind and weather conditions are appropriate, though sunset offers some of the most majestic views.

As we soar over the airfield, Craig poses a question. “What makes this fly?” he asks. It sounds like a trick question and I’m stumped, straining to recall science lessons from too many years ago.

“It’s gravity,” he answers. He’s talking about the weight of the pilot and the wing combined with the kite’s special design that creates thrust through the air as well as lift. It’s a lot to marvel at, but so is the simple notion of what drove the creation of such a sport in the first place—a desire to fulfill one of man’s oldest and wildest dreams.

The flight culminates with some fun swoops and turns (plus a few gleeful squeals), which are executed by a shift of weight. I’m instructed to look right and stare at the wing, and within seconds, the hang glider angles in that direction.

The landing seems effortless, but as I later learn, it was carefully calculated. Aiming to hit the right spot at the right speed takes experience, as there are no brakes on a hang glider—only a small handle for steering the wheels upon landing.

As equipment is packed away and my friends and I are buzzing from the adventure, Craig, Laura, and Lightening Larry regale us with stories of competitions, recreational fly-ins (where pilots gather for the camaraderie as much as they do the opportunity to soar), and epic flights, including a wild ride off of a volcano in Hawaii. Hang gliding is elevating in more ways than one, and it’s easy to see why one would devote a lifetime to such lofty aspirations.

At press time, the Tater Hill paragliding and hang gliding competition is set for July 26-August 1 in Zionville. Spectators can catch the action from Silverstone Road or can call to arrange a tandem paragliding flight during the weekend. flytaterhill.com

A paragliding kite is more akin to a parachute, with the pilot in a vertical seated position. But aside from the visible differences, the younger sport is considered to be a calmer activity. A paragliding kite has a larger surface area that makes for a more leisurely ride, while hang gliding offers more opportunity for aerial acrobatics and faster speeds. Both come with safety risks and require sufficient training for solo flying.

View from Above The ultralight plane is merely a frame with wings and an engine, offering gripping views of what lies below. The tandem flights offered by Thermal Valley fly at altitudes between 1,500 and 2,500 feet, though hang gliders can reach heights of well over 18,000 feet.