Growth Spurt: For esteemed sculptor Michael Sherrill, the best is yet to come 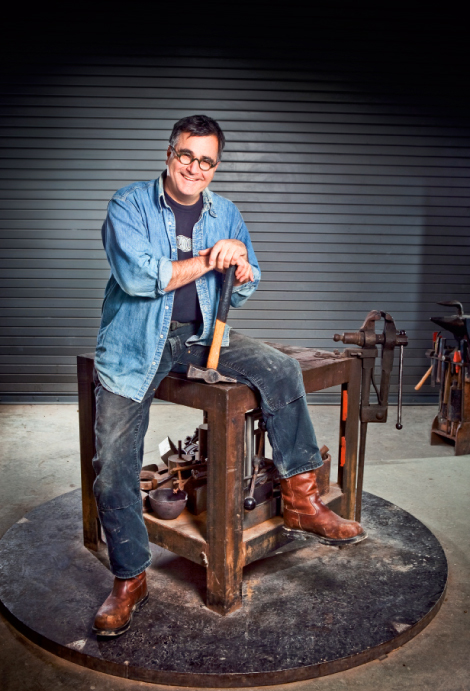 When Michael Sherrill works, his blue, barn-size shop deep in the woods of Bat Cave is more indicative of a factory than anything else. The studio is abuzz with machinery to cut wood, shape metal, and extrude the colored strips of clay that he shapes, fires, and then works into his sculptures of the natural world—some life-size, and some exaggerated in scale, hue, and surface texture.

But when Sherrill isn’t working, the shop is as tidy and silent as a church, and the artist is left to commune with the forest all around him, where his inspiration takes root. Now, as spring brings forth new growth, color, and forms, Sherrill sees the world from a fresh perspective—a bit wiser, perhaps, and farther down life’s path. “I am forging my way to the destination,” he says. “My tastes have drifted and changed.”

Galleries and private collectors around the world seek examples of his sinuous work: rhododendron branches, yucca blossoms, seed pods, and other bits of flora—and some fauna—wrought in metal, clay, and more recently stone. And the line of ceramic tools he invented years ago, called Mudtools, are shipped to artists around the world.

The accolades for Sherrill appear unending; his richly etched and deeply colored ceramics representing the plant world of Western North Carolina and beyond have earned him the title of Artist of the Year at Charlotte’s Mint Museum of Craft + Design. His work has appeared in exhibition spaces in the Smithsonian, Clinton Presidential Library & Museum, North Carolina Executive Mansion, and Incheon, South Korea’s World Ceramic Center. Last year, he was one of a small group of visual artists to be named a United States Artist Recipient. The distinction came with a $50,000 fellowship, which Sherrill plans to use to create a traveling exhibition of his mid-career work.

With this success, the financial strains and grueling deadlines indicative of a young artist’s life are things of the past. A grandfather of three and father of a five-year-old, Sherrill longs to delve still deeper into life’s sobering inevitabilities, along with its joys, and then capture the trip in enduring forms that speak to others.

“One of the better pieces of my life,” he says, is the recent Mercy Seat, an 11-foot-tall installation at Carolinas Medical Center-Mercy in Charlotte. A boulder forms the seat, metal comprises a spare tree growing near it, and ceramic leaves create a richly textured canopy. Working in metal has returned Sherrill to his artistic starting point in structural steel.

“The reality is that I’ve spent years moving toward doing the best work of my life, to get in the position to have this long dance, this long rhythm,” he says. “I’ve enjoyed the journey.”