Growing Pains: During a trek on Calloway Peak, a father of twins learns to loosen the reins 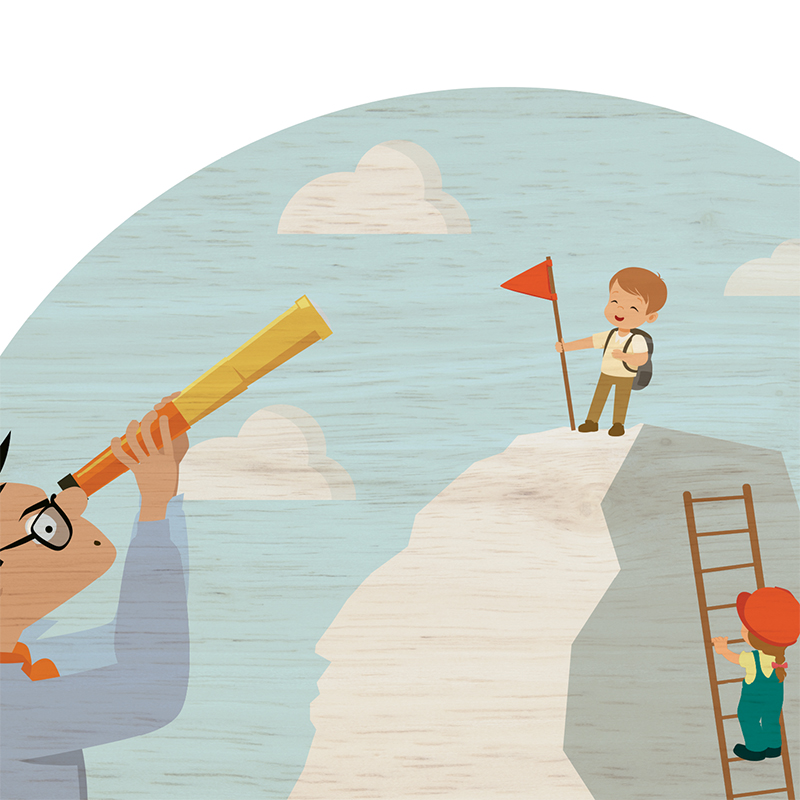 My kids are not going to fall off the side of the mountain. I keep telling myself this as my wife and I lead our eight-year-old twins, Cooper and Addie, up a series of wooden ladders that climb the granite walls of Calloway Peak. It’s like a mantra, “Ommm…my kids are not going to fall…Ommm,” but honestly, I’m not so sure. We’re inside Grandfather Mountain State Park, making our way up Grandfather Trail, a rugged 2.5-mile hike that climbs the crest of Calloway Peak through a series of wooden ladders, rock scrambles, and cliff edge traverses. It’s easily one of the best hikes in the state, full of fissure caves, spruce forest, and rock faces with vertigo-inducing exposure. As in, one step in the wrong direction and you’re free-falling to certain death.

It’s the sort of trail that I typically wouldn’t take my children on because the risk/reward ratio is askew (risk: children fall to their death; reward: cool Instagram photo from summit). But apparently, as my kids get older, I’m supposed to trust them more and let them challenge themselves. Something about “emotional growth.” Whatever, I’m not much of a free-range parent. My instinct is to surround my kids with bubble wrap and pillows at all times. When I see a wooden railing on a deck, I imagine my kids getting splinters, and then an infection from that splinter, and then having to amputate an arm because of that infection…so I’m nervous when we start climbing ladders and squeezing through cracks in granite slabs about a mile into the hike. I reluctantly let my kids explore the caves along the trail, trying to remember what to do in case of a snake bite. Do I suck the venom out? Do I pee on it?

The crux of the climb is two back-to-back ladders tethered to the side of a 50-foot cliff. When you reach the top of those ladders safely, you have to shimmy across a skinny, overhanging ledge for 15 feet. A couple hundred feet below the ledge is a pit of doom full of broken glass, used hypodermic needles, and hungry alligators—at least, that’s what I’m imagining. Needless to say, I’m an emotional wreck when we reach the ledge, but I have to keep smiling because kids can sense fear and I want them to enjoy their near-death experience. My face is frozen in a Joker-like grimace as my kids, oblivious to their precarious fate, point to a lake off in the distance.

I can’t deny that the view is beautiful. The legend goes that French explorer/botanist André Michaux broke into song when he reached the top of Calloway Peak because he thought he had reached the highest point in North America. It’s not even close, but I can understand his enthusiasm.

We make the kids hug the granite wall on the inside of the ledge as we carefully traverse the cliff, and I spot them as they reach a point where they have to climb, hand over hand up a slab of granite to more sturdy ground, wishing I had brought enough bubble tape and pillows to make the situation safe.

As they start climbing the rock, I’m worried a powerful gust of wind could sweep them away (they’re so fragile). An eagle could mistake them for a tasty woodland creature and snatch them right off the rock. While I’m scanning the sky for birds of prey, my kids manage to ascend the perilous climb all on their own. No bubble wrap necessary. They’re downright giddy as they move up the trail without us, looking for the next ladder, the next rock to climb. When did they get so capable? They’ll probably get jobs when we get back home, maybe find their own place to live.

That French botanist dude wasn’t wrong; the view from the top of Calloway Peak has a top-of-the-world quality, and it makes a good Instagram shot, but the look of satisfaction and accomplishment on my kids’ faces is more impressive. It wasn’t long ago that I would have had to carry them up the mountain. Or turned back because one of them got scared. I’m no longer worried about my kids as we hike back down the mountain. Not because the kids can handle themselves, but because I’m now consumed with an even more terrifying thought: that point in the not-so-distant future when my kids won’t need me at all.