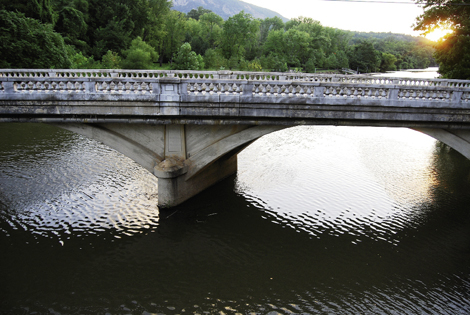 For 86 years, drivers navigated Historic Bridge #7 over the Rocky Broad River, more focused on their destination or the views of Hickory Nut Gorge than the span of roadway beneath. Today, the bridge is undergoing a makeover to become a destination itself, where visitors can soon stroll among flowering grasses, plants, and trees.

When the community learned the old bridge, a section of road where U.S. 64 & 74A and N.C. 9 overlap, would be decommissioned and a modern bridge would take its place a few yards upstream, they hatched a plan to repurpose the arched span. The proposal for a park was inspired by the Bridge of Flowers in Shelburne Falls, Massachusetts, a discontinued trolley trestle that locals converted into a flowering walkway nearly a decade ago.

“We decided to make the bridge a thing of beauty and education,” says Lee Armstrong, with the nonprofit Friends of the Lake Lure Flowering Bridge, “but we also have a responsibility to take care of the bridge and river.”

A grand opening is slated for fall, but the greenspace is open while volunteers plant beds, install benches, and lay paths. From carefully considering which fertilizers are safest for the waterway, which is home to trout, to planting trees that will nourish and shelter migrating and local birds, the nonprofit is making sure the bridge will enrich the community in its second life.


EXTRA
Visitors can park near Town Hall and follow a path to access the bridge from the center of town.

The landscaping is focused on native plants, including the fragrant, summer blooming Annabelle hydrangea, seven-son flower tree, and clethera shrubs. From carefully considering which fertilizers will be safest for the river below, which is home to trout, to planting trees that will nourish and shelter migrating and local birds, the nonprofit is making sure the bridge will enrich the community in its second life.