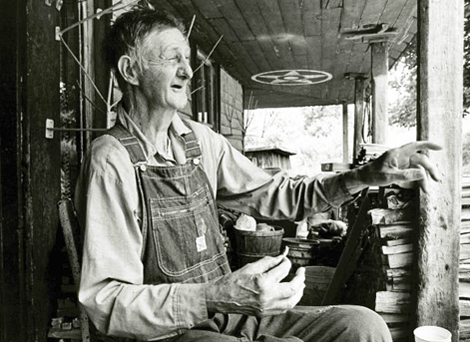 At any glance, Ray Hicks was the quintessential mountain man, a lanky gentle giant in bib overalls who towered six feet, seven inches.

Born in 1922, he lived his entire life in the rambling mountain house built by his grandfather high on the Tennessee side of Beech Mountain. Here he chopped wood, grew potatoes, and drew water from the springhouse, and his wife, the diminutive and soft-spoken Rosa, cooked their meals on a wood-burning stove.

Except for the fact that he owned a television, chain saw, and icebox, Hick’s life “on the Beech,” where he and Rosa raised five children, was not so different from that of his ancestors who settled this corner of Appalachia in the 1700s.

He kept to the old ways and spoke with the peculiar brogue that marked the mountain people of bygone days. An unassuming man, he probably would have happily lived a life of anonymity had it not been for one fact: He was a storyteller of the first order, the father of “Jack tales” that held audiences spellbound or in gales of laughter. Like the stories he told, Hicks became a legend himself, and his natural talent for weaving tales brought him international fame. Of the many fine storytellers this region has produced, Hicks was the master.

He didn’t just make an impression on audiences, he inspired other tale-tellers as well. In 1973, storyteller Connie Regan-Blake met Hicks at the inaugural National Storytelling Festival in Jonesborough, Tennessee, and she maintains a friendship with his family to this day. “Ray became a mentor, a teacher, and offered a wealth of wisdom,” she says. “I felt like I learned so much being in his presence.”

Ray grew up in the oral tradition of the old-time mountaineers, back when storytelling was often the only entertainment in the backwoods.
“I wasn’t teached. That’s the way I growed up a-talking,” Hicks told The New Yorker in 1988. “I learned my Jack tales mostly from my dad’s father, John Benjamin Hicks. My grandmother Julie told Indian, witch and haint tales, too. I’d set and pick the burrs out of the hanks as she spun, and listen. They were both well in speech.”

To say that Hicks was “well in speech” is an understatement. He had a special genius when it came to spinning a yarn, a natural ability of embellishment that gave twice- and thrice-told stories a freshness with every telling. “Do you want to hear a Jack tale?” he would shout to his audience. The answer was always a resounding “YES!”

In The Story of English, a PBS documentary that featured Hicks, host Robert MacNeil said Hicks’ Jack tales had ancient antecedents in Celtic and European folklore and were brought to America with the settlers. “I learnt not to plan my stories. That’ll ruint you,” Hicks said about his offhanded approach, which he called “unthoughted.” “I just tell the one that hits my mind when I hit the mic.”

Hicks spun many a yarn, but his Jack tales became the audience favorite. Akin to the “Jack and the Beanstalk” folktale, Hicks’ Jack character was a poor mountain boy, an Appalachian trickster who regularly outwitted thieves, witches, greedy old men, and even recalcitrant mules and “dunkeys,” often using supernatural powers.

The stories were all the better thanks to his distinctive manner of speech, which was as much a holdover from the early Scots-Irish and English pioneers as his Jack tales. His brogue was more than a drawl; it carried the familiar mountain twang, but was punctuated with guttural stops reminiscent of those heard in speech on the Yorkshire or Scottish moors. As one of his daughters said, “I don’t know how it popped up in Daddy…. He has the dialogue that come over with the ships from Shakespeare’s country.” Scholars have referred to Hicks’ unique manner of speaking as close to the purest form of the dialect spoken during the time of Davy Crockett and Daniel Boone.

“For all of us who came into contact with him when he was alive, and those still meeting him through videos and CDs, it really opened this window back to the 1800s,” Regan-Blake says.

He carried a rich array of mountain stories and could deliver lines with the punch of a stand-up comedian. “There’s three kinds of moonshine,” he’d say to his audience with a twinkle in his eye. “The huggin’ kind, the kind that makes ya sing, and the kind that gives ya fifteen fights to the pint.”

Hicks rarely left the mountain to go “into the beyond” (his phrase for the outside world) except for occasional forays to tell stories in area schools and his annual trip to Jonesborough. Only once did he venture farther afield. In 1983, he had to be coaxed to Washington, D.C., to receive an award from the National Endowment of the Arts. He met then-Vice President George Bush and received a personal letter of congratulations from President Reagan.

Yet Hicks was unimpressed with Washington. “I ain’t understanding the words, a lot of  ’em, what people said,” and he didn’t like staying in a hotel. “I feel I’m a-ruinin’ the place. Rough as I am, it suffers me.” Always the storyteller, he related how he got caught in a revolving door “and walked around for a day and a half.” He said his brother, Stanley, “got in one, too. Ain’t seen him since.”

The master died in 2003 at the age of 80. Audio and video recordings of Hicks’ storytelling can be purchased and he’d likely be tickled to know that segments featuring him telling tales and playing his harmonica can be found on YouTube. Books have been written about him and he’s been the subject of documentaries. He could have become even more famous (he turned down an invitation to be on Johnny Carson’s The Tonight Show), but he’d seen how fame and money could “turn” a person. Nor did he want to leave his mountain.

Instead he chose to remain the genuine item—a fine, kindhearted man with an extraordinary talent that brought him and those around him joy.

Rosa Hicks still lives in the home she shared with Ray. Thanks to a fund set up by Reagan-Blake, the house now has insulatin, indoor plumbing, and kerosene heat. Donations can be made to the Ray and Rosa Hicks Fund, which helps maintain the property. visit www.rayhicks.com/donate.htm.