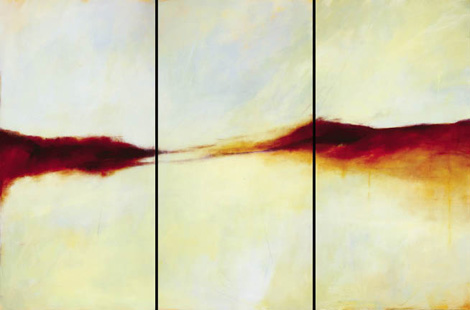 About 10 years ago, Genie Maples was cleaning up after one of her children’s craft sessions in her suburban Atlanta home when she learned something new about herself. As she poured some unused tempera paint down the drain, one of the colors, a buttery yellow, caught her attention. “I’d never painted before in my life,” she says, now sitting in her River Arts District studio, “but something inside me didn’t want to let that color go to waste.” She walked the ice-cube tray full of mixed-up kiddie paints to the table and started to create a scene of a woman crouched on the floor of a yellow room. She showed it to a few friends, and soon someone asked how much she would sell it for. Maples took the $200 she got for that painting and immediately invested in some brushes, inexpensive acrylic paints, and canvases, and began teaching herself to make a living off of painting.

Her early works didn’t see the inside of many galleries; instead, she found a more accessible market for novice artists on eBay—selling an estimated 1,000 paintings through the site in her first four years. It might not have been a glamorous start, but “there’s no better way for a completely self-taught artist to find their creative voice than to produce work at such a relentless pace,” she says. For her, that process included an evolution away from representational subject matter to focus exclusively on balance and color in oil-on-canvas works. Occasionally reaching up to 10-feet tall, each painting begins with a line, which Maples stretches outward, adding paint and creating a color field that’s often suggestive of a landscape.

Since moving to Asheville more than five years ago, Maples has drawn upon the community of local artists—a resource she didn’t have access to in Georgia—for ideas, encouragement, and inspiration as she supports herself and three children solely through her artwork. But she credits her life as an artist to a subconscious voice that prompted her first foray into painting. “I believe that life occasionally whispers to us, suggesting different directions that we should take,” she says. “I’m just glad I listened that day.”