Forever Forest: Take a trek through Joyce Kilmer Memorial Forest to marvel at some of the oldest trees in Southern Appalachia 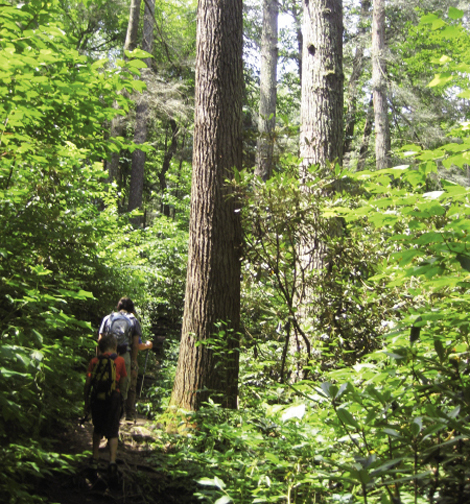 It’s doubtful that Joyce Kilmer ever laid eyes on the forest in Graham County that bears his name.

Famous for penning the poem “Trees,” he was born in New Jersey and died as a soldier during World War I in France.

In 1936, the U.S. Forest Service was tasked with finding a stand of trees suitable for commemorating Kilmer’s life. Even though the poet had no direct ties to Southern Appalachia, this wild cove of massive hardwoods fit the bill.

“In the ’30s, Graham County was, and still is, one of the most remote areas in the Eastern U.S.,” says Josh Kelly, a biologist and old growth expert with the WNC Alliance, an environmental advocacy group. “The cove was one of the most significant examples of virgin forest standing in the East, with a high concentration of big trees all in one spot.”

Take one look at the giant hardwoods that comprise the memorial forest and you’ll understand what Kilmer was trying to convey when he wrote “I think that I shall never see, A poem lovely as a tree.” The 3,800-acre tract is the domain of skyscraper-size tulip poplars that stretch 100 feet high and span 20 feet in circumference, offering a surreal glimpse at what our Southern landscape looked like before it was systematically stripped of its timber. The virgin forest changed hands among timber companies for 50 years, but was spared the ax because of the rugged, inaccessible terrain. The Great Depression ultimately saved the trees, allowing the forest service to purchase the land when the company that held the deed went bankrupt.

Seventy-five years later, the memorial forest is no less awe-inspiring than when it was first established.