Forecast 2050: Get those futuristic images of hovercars and robot butlers out of your head. We asked experts to give more accurate predictions for WNC’s future when it comes to environmental health, public land, Population growth, education, jobs, and agriculture 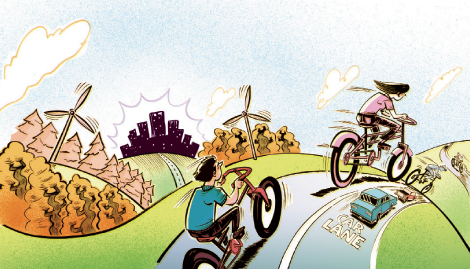 Many climatologists are full of doom and gloom when it comes to the future. But not Drew Jones of the Sustainability Institute, which works to break down barriers preventing economic, social, and environmental sustainability. Though he acknowledges the effects of climate change are the biggest concerns, he insists the future is bright for our region.

“We’ll be using less than half the energy we use now. And we’ll get that energy from much cleaner sources like solar and wind power,” says Jones. Thus, the ridges and mountainsides that make up a generous portion of our landscape will be dotted with windmills, and more roofs will host solar panels.

Bikers will gain an advantage over drivers with wider travel lanes, he says, as there will be fewer and smaller cars on the roads. Jones foresees more people on buses and bikes, and walking to their destinations because of development that’s centered on better transit options.

As a result of cleaner energy use, carbon dioxide emissions will be curbed, as well as sulfur dioxide and nitrous oxide, both of which create surface ozone and haze. “In 2050, we’ll have much better views because of this,” says Jones, “and we’ll be much healthier because we won’t have so many pulmonary problems from asthma and other issues that can be caused by air pollution.”

Nature versus the foreign invaders

Acentury ago, men with vision saved great blocks of mountain acres from the saw. Still, the threat to public land remains, but now the menace is microscopic and can take down trees with the competence of a thousand lumberjacks. “Foreign pests are what concern us,” says Great Smoky Mountain National Park spokeswomen Nancy Gray. She’s referring, in part, to the balsam woolly adelgid infestation responsible for extinguishing 90 percent of the park’s Fraser fir forest. The pest from Europe is just one of many foreign critters and diseases that are eroding the park’s hallmark of biodiversity.

Gray, however, keeps a positive outlook. After all, the diversity of life in the Smokies was nearly rubbed out by logging and fires decades ago. “We’ve come back. The park is stronger than ever,” says Gray, who adds that predicting future threats from invasive insects and diseases is difficult.

Since the region may never again see the mammoth land acquisitions that created our famous parks, forests, and byways, conservation groups and public land managers are zeroing in on protecting key tracts surrounding public places, creating buffer zones to fend off outside dangers. “New acquisitions won’t happen at the same pace,” says Carl Silverstein of the Southern Appalachian Highlands Conservancy in Asheville, but handling future threats from pests and development will require a Herculean effort and the commitment of leaders to make what’s here now, even stronger in 2050.

In 2050, you might be driving a car that runs on fuel distilled from switch grass grown in Hendersonville. And farmers could be harvesting produce from permaculture food forests. It will be a far different landscape than what we see today.

Steve Duckett, county director at the N.C. Cooperative Extension, predicts an increase in the diversity of regional crops spurred by changes in technology and an ongoing decrease of farmland (yes, gated communities will continue to sprout in the countryside).

Monocropping—the practice of planting the same crop each year—may still support area farmers, especially those who start growing technologically engineered crops used for fuel, Duckett says. However, most growers will continue to switch from former favorites such as tobacco to high-value crops like organic greens, tomatoes, and berries.

Farmers also will experiment with techniques that get the most out of their land, such as food forests. This growing method mimics forests which support multiple levels of plants—for instance, ground crops grow under fruit bushes that are planted under fruit trees—allowing all to benefit from a more complete ecosystem.

Duckett anticipates farmers will be forced to become more creative about attracting customers in a competitive market. He cites the success of regional Christmas tree farms that offer extras, such as wreath-making classes and hayrides, to lure holiday shoppers. “I see a trend toward more agri-tourism farming—that includes tours and possibly hunting rights,” he says.

Finally, we’ll all become farmers of sorts as food costs increase and home gardens become an economical choice. In fact, mobile slaughter house businesses will thrive as the urban chicken movement expands—turkeys, ducks, goats, and even pigs may become commonplace in city yards.

More brain power and less sweat—that’s the upshot of what WNC workers can expect in the job market 40 years from now.

Our farming and manufacturing economy has evolved into a haven for members of the creative class—people who work from home or start small, independent businesses. That trend will continue as folks who commute via Wi-Fi choose to move here for the natural beauty and quality of life, says Brian Griffin, associate director of lending at Mountain BizWorks, a nonprofit which provides business training for entrepreneurs across our region.

“Talented people from all over will flock to the area,” agrees Ty Hallock, CEO of TopFloorStudio, an interactive and social media design firm in Asheville. “Centers of innovation in media, entrepreneurship, and technology will lead to an Asheville referred to as ‘Silicon Mountain,’” he says, adding that manufacturing in the area will focus on the production of alternative energy, such as solar and wind power.

And folks will still visit WNC to hike, soak up nature, and drink beer. Therefore, tourist-dependent businesses will continue to demand workers, especially as the adventure, eco-tourism, and craft brewery industries burgeon.

Should visions of a warming planet hit the mark and sea levels rise, many high and dry areas like WNC should see tremendous growth in populations by 2050. Even with less dire predictions, the natural charm and laid-back lifestyle here will continue to lure transplants. According to Joe Minicozzi, new projects director of Public Interest Projects in Asheville, we aren’t necessarily prepared for the influx.

Attempts at creating effective mass transit are locally underwhelming, says Minicozzi. For instance, Asheville’s metropolitan planning organization doesn’t have funding set aside for much beyond roadway building and maintenance.

Also, he says, “We don’t have any restrictions on growth in the county, so the pattern will be sprawl. That’s the natural paradigm of how development happens in an unconscious way. Our policies are set up to design an environment of sprawl.”

The news isn’t all bad though. The flood of people moving to our area will bring new ideas and lifestyle expectations, spurring improvements in infrastructure. In Asheville, greenways along the creeks of West Asheville and Haw Creek, for example, will connect to the existing Swannanoa and the French Broad greenways. And more neighborhood parks will give children central places to play.

“Design and beauty can be a community goal. When I think about what this place could be, I have spectacular visions, but they’ve got to be tempered with the reality of what we can actually accomplish,” Minicozzi says. “We can be incredible. We can have fingers of forest coming into the urban environment. We just have to prioritize and do it.” With any luck, the newcomers will demand that we make it happen, and a little less room will be worth the sacrifice.

Predicting the state of education in 2050 is no mean feat, and the best crystal ball might come with a switch that also allows a look back. So says Jim Fox, director of the Renaissance Computing Institute (RENCI) at UNC Asheville, a collaboration of universities and partners focused on bringing the state’s cyberinfrastructure to bear on the near-future’s most pressing problems.

Despite RENCI’s forward-looking mission, Fox says much of what held true 40 years ago will still be true 40 years hence. Students will still need the basic building blocks of education, and they’ll continue to seek “a sense of place, a sense of history, and a sense of how humans are fitting into their natural system.”

While WNC will likely be more connected to the rest of the world given technological advancements, expect some educational challenges to be unique to our region. For instance, the mountain ecosystem will encounter new pressures that will have to be studied and dealt with locally. What’s more, Fox observes, our energy equation will doubtlessly affect how students convene to learn. Perhaps we’ll see substantially more distance learning; of course, it will take considerable sums of money to make all of WNC—including rural and remote areas—truly wired.

The virtual world adds much to modern education, “but it can’t replace the sense of community for how we learn,” concludes Fox. “By and large, human beings learn by stories. We learn our deepest lessons from the storytellers we trust and believe. I don’t think we’re going to see the virtual element replace that.”