Folk Story: A Cashiers home tells the tale of a love affair with primitive art 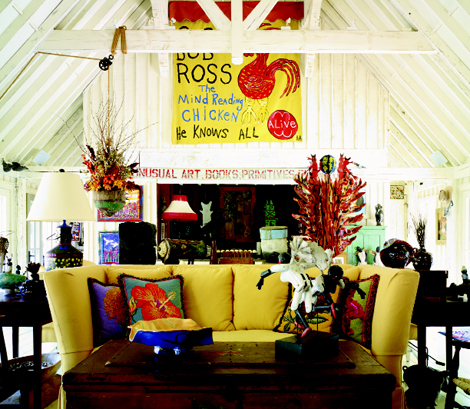 Only a few people have made my list of possible compatriots for future road trips. There’s the predictable crew: family, best friends. And there’s the dream list of sidekicks: Charlie Chaplin, Deborah Solomon. And Judy Pratt just made that list.

With bobbed gray hair, pert red glasses, and fueled by a near-constant supply of Coca-Cola, the Cashiers resident and New Orleans native would be the one to encourage me to explore all the side roads. She would want to stop every 15 minutes to hunt for extraordinary objects—whether they’re in the dusty corners of random junk shops, or on the walls of the South’s best art galleries. “My husband said I am the ultimate hunter-gatherer,” Judy laughs.

But her home, vibrant with the vivid hues of folk art, makes it easy to understand the comment by her late ex-husband, Cole Pratt.

Outside, the home’s long, low mountain-cottage styling suits its spot on the rhododendron-covered mountainside overlooking Horsepasture River. After searching for seven years before selecting the four-acre property, the couple, with the help of Cashiers home designer Tim Greene, spent two years constructing what they originally intended to be their summer home. It was finished in 2000, but Hurricane Katrina and a divorce changed everything, and Judy became the home’s full-time resident. “I already felt very much at home in the mountains,” she says.

It was Cole, she says, who spent hours sketching nearly every inch of the home. With whitewashed floors, walls, and ceiling beams, and more than a half-dozen French doors opening to a long back deck, the home is most reminiscent of a tough-and-tumble, light-filled barn. In the kitchen, for example, bare bulbs that hang between the rafters illuminate cabinets constructed with wood from a circa-1850 Pennsylvania barn. In fact, much of the home was built with reclaimed wood. “We wanted everything to look primitive and old,” she says.

The neutral interior serves as the backdrop for Judy’s collection of folk and tramp art, which she’s picked up at galleries, auction houses, and antique stores. Cole was the owner of a contemporary fine art gallery in New Orleans, and when he went out searching for new artists, Judy went with him and sought out folk art. To describe her collection as diverse would be an understatement. A former travel agent, her pieces include everything from Mexican masks to pottery face jugs, from chickens made with tin to chickens made with garbage bags, from paintings of churches to paintings of hell.

You can’t help but laugh at many of them. Above the window that connects the living room to the galley kitchen hangs a large, carnival-inspired painting of a bug-eyed, mind-reading chicken titled, He Knows All, by Georgia artist Butch Anthony. A framed cross-stitch piece in the kitchen reads, “When I works I works hard, when I sits I sits loose, when I thinks I falls asleep.”

Antiques are part of the mix. An old dry sink—one of the first pieces the couple bought together—sits in the living room, paired with metal cutouts by self-taught Louisiana artist David Butler, who made his environmental art from old tin roofing and house paint. One resembles a court jester riding what might be a goat with a propeller as a tail. In the same room, she also displays a piece by renowned outsider artist Howard Finster: a wipe rag on which he drew hundreds of faces interspersed with religious sentiments.

The ultimate meaning of many of the pieces is subjective, but to Judy it’s nearly always fun. “I want people to smile. I want them to have fun,” she says. We’re standing in her downstairs sitting room, which has walls painted Day-Glo orange and built-in bookshelves filled with games and painted gourds that are fluorescent green. Nearby, pillows that resemble candy bars festoon bunk beds where her grandchildren sleep when they visit.

Throughout the house, she has incorporated the element of surprise. The second floor holds a hidden loft accessible only by a wood ladder. In a bathroom, exposed metal pipes lead to the shower fixtures and tin roofing serves as wallpaper. The outside wall in the master bathroom’s shower is entirely clear glass. “When people first come to my house, they’re sort of startled,” she laughs. “I think they would expect me to be a more traditional sort of person in my surroundings.”

An avid seamstress, she’s also filled her sewing studio with creative embellishments. Shiny metal roofing covers the ceiling, bouncing the springtime light to her sewing table, where she sits on a stool (originally from a yacht) to craft colorful quilts and clothing for herself and grandchildren. Spools of thread stand at attention on the shelves of an old motor-oil display originally from a filling station. Books on everything from do-it-yourself home repair to the best small towns in the South fill chartreuse shelves.

Though vibrant, Judy’s home isn’t Pee-wee’s Playhouse. Folk art is colorful. Some say it has a childlike sensibility, but its themes are nearly always deep. They tell stories of joy and loss, sin and salvation. “Most of this is people really baring their souls,” she says. “It was a way of expressing what they felt.”
Many, too, have significant historic value. For example, the face jugs that inspired Judy’s love of folk art have roots, some say, in the grave-marking tradition of slaves. Many of the pieces also signify strong emotions for Judy. She came across the painting of an angel in a field of sunflowers that hangs underneath the stairwell window after her youngest daughter died in an car accident at the age of 19. “It just spoke to me,” she says.

That’s how she’s discovered all the pieces, by searching for artists who speak to her through their work.

Filled with color and texture, the home has earned the moniker Camp Pratt from her four grandchildren. “It’s rather eclectic,” she says. It also reminds her to laugh. “I don’t like to take life too seriously.”

To recommend a home to be featured in WNC, contact Home Editor Angie Newsome at homes@wncmagazine.com.