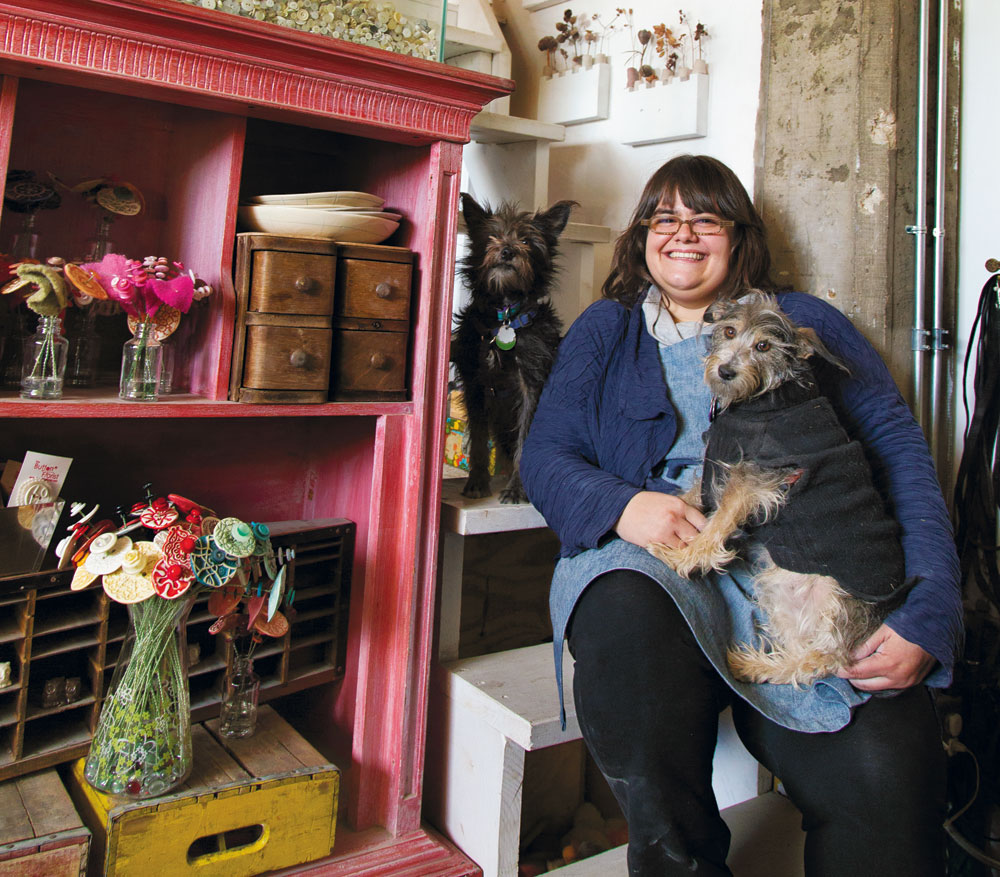 Celia Barbieri collects small treasures. Growing up, she filled glass jars with rocks, seashells, marbles, stamps, and coins. “I have fond memories of playing with my grandmother’s buttons,” she says, “pouring them out and sorting them by color, size, and pattern.”

Today, Barbieri’s studio in Asheville’s River Arts District mirrors this organization from her childhood. Drawers and containers separate the blue buttons from the reds, purples, and yellows. Barbieri uses the buttons to create bright, whimsical flowers and custom bridal bouquets that neither wilt nor die.

Upcycling is a huge part of Barbieri’s art—from the vintage buttons she strings and twists through wires to the old wool sweaters she felts in the washing machine and cuts up for leaves in her bouquets. She even makes wreaths from the sweater scraps.

For years, Barbieri scoured myriad second-hand stores to grow her button collection, but now the buttons find her. “I’m known to many as The Button Lady, she says, with a laugh. “People bring and send me buttons. I feel so honored when someone decides to pass on their grandmother’s button tin to me.” The excitement she had as a child returns every time she opens a container of buttons and pours them out.

A button has a life to it. A collection of buttons holds years of stories. Breaking up an entire collection sometimes presents a sentimental challenge for Barbieri, and the decision is not taken lightly.

Once a man in his late 80s sold Barbieri a huge tin of his late wife’s buttons to help with funeral costs. But she has yet to use any of them. “There’s something about disrupting the grouping—this story of the collection,” she says. She has found everything from teeth to keys commingled within button collections.

Barbieri studied biology and art at Warren Wilson College, and her creations marry those two passions. “The science is still back there,” she says, pointing to her head. Her flowers are inspired by the bounty of colors and plant life in the mountains of Western North Carolina. She is in awe of the textures, designs, and symmetry found in nature.
Barbieri loves real flowers and firmly believes her perpetual blooms don’t replace the fresh ones. Hers are an art form to be enjoyed through the test of time. While there are other artists creating button flowers, Barbieri’s work is unique in that she also crafts some of the buttons, pressing objects as varied as toys, peach pits, magnolia pods, and bike cogs into clay. If an item has an interesting pattern and texture, it has button potential. She also dyes a large selection of white buttons a multitude of colors.

In a vibrant community of creators, crafters, and innovators, Barbieri has found a way to stand out. “My flowers are created with a common simple material that people find a connection with,” she says. “Buttons often make people nostalgic for a simpler time. My flowers tend to make people smile and I love that effect. I take great pride in knowing that I create work that brings joy.”

Forever Bouquets
Barbieri’s flowers can be found at several Asheville galleries, at her studio, or on Etsy. For more info, visit www.thebuttonflorist.com.