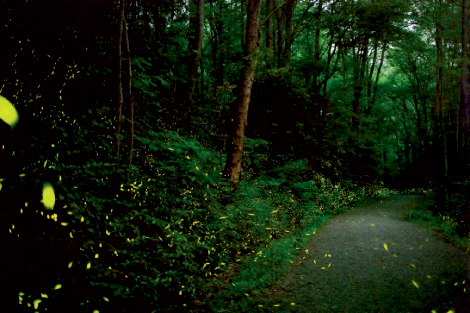 This month, get outside around 10 p.m., find a forested area, and sit quietly in the dark. This is the best chance to see a spectacular light show put on by two of Southern Appalachia’s most illusive firefly species: synchronous and blue ghost.

Fireflies are familiar sights of summer. They flash to attract mates, with both males and females signaling their intentions with specific sequences. Because the insects are nocturnal, they use light instead of colors to advertise their location and fitness to reproduce. In most species, the male flashes a precise pattern and the female counters with an equally distinct response, but for the two fireflies found only in Southern Appalachia, the male’s flash is so overwhelming that the female’s response is barely noticeable to humans.

The male synchronous fireflies (Photinus carolinus) flash in unison, all blinking together and all stopping at exactly the same moment, as if a conductor has cued the orchestra. One male starts the chorus, then the rest join in for usually six flashes. The trees, shrubs, even the ground pulses with light; then it stops and complete darkness settles in for a few seconds. Presumably during this break, females respond with flashes that are more faint. Elkmont, Tennessee, in the Great Smoky Mountains National Park is famous for its display, which occurs during mid to late June.

Among the blue ghost fireflies (Phausis reticulata), the males don’t flash. Instead, they glow continuously with a pale bluish-white light as they hover silently inches off the ground. The effect can be eerie when hundreds of them drift over the forest floor like fairies. Females are nearly invisible, as they prefer to hide among leaves and other ground cover. Blue ghosts are most commonly found in dark, forested coves where their dim light stands out. One of the best spots to see them is DuPont State Forest near Brevard in late May and early June.

Both species are common in other areas of Southern Appalachia, though few people see them because few explore the forests after dark. If you do venture into the dark stillness and you happen to catch one, don’t be surprised by its appearance—it looks like a dark beetle about the size of a rice grain. He’s just what the female is looking for.

Jennifer Frick-Ruppert is the author of the newly released book Mountain Nature: A Seasonal History of the Southern Appalachians.