Fired Up: The towers that once helped the mountains ward off blazes are finding new lives as hiking destinations 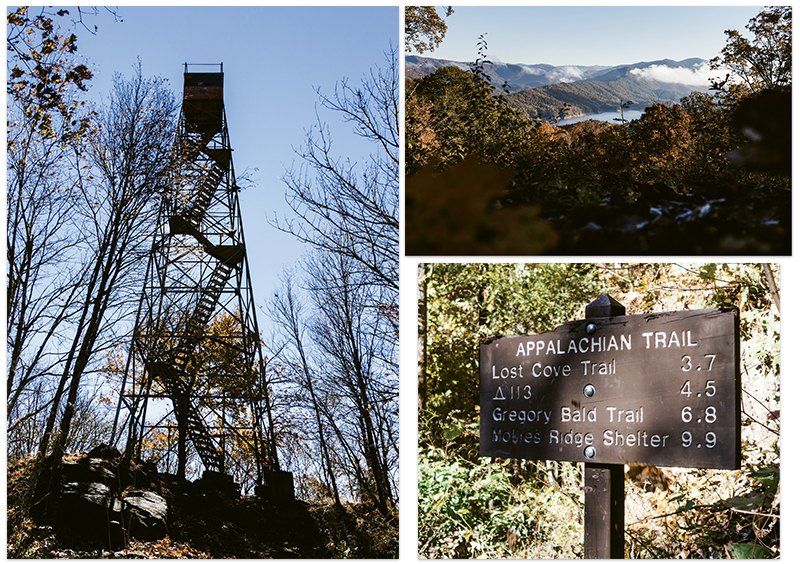 Sky High - (Left) While still used in the eastern part of the state, historic fire towers like Shuckstack (shown) have become obsolete in WNC as a way of spotting forest fires. They offer astounding mountain views as well as a peek into the ways of park rangers of yore; (Right, top & bottom) All Encompassing - From Shuckstack Tower, located a mere tenth of a mile from the Appalachian Trail, visitors can take in dazzling views of the Unicoi, Snowbird, Nantahala, Blue Ridge, and Great Smoky mountains, as well as Lake Fontana.

I hate hiking. There, I said it. I’ve been ashamed to admit that for decades—it’s kind of like telling the world you don’t recycle, but it feels good to get that off my chest. OK, “hate” is a strong word, but it’s a matter of work/reward. You hike three miles up the side of a mountain through the trees and what do you get? More damn trees. Maybe a partial view through the leaves. This is the plight of hikers in the Southern Appalachians, a massive range of peaks covered with a forest thicker than your grandma’s shag carpet. The dense cover is great for biodiversity (salamanders and squirrels love it), but it does little for epic views.

I’m thinking about my general dislike of hiking as I’m slogging through a tunnel of trees on my way to the summit of Twentymile Ridge. I’m in the southwest corner of Great Smoky Mountains National Park near Lake Fontana. While an estimated nine million people flock to the park every year, most of them stick to Newfound Gap Road and the trails surrounding that particular highway, which slices through the middle of the park. So, it’s just me and the trees as I ramble through an endless litany of switchbacks on the side of a mountain. But I’m not looking for solitude, I’m seeking something even more precious—a damn view.

At the top of this particular mountain is Shuckstack Tower, a decommissioned fire tower that once housed a ranger whose sole job was to keep an eye on the thick forest below for signs of smoke. The park stopped using Shuckstack decades ago, but the tower still stands as a beacon for hikers. Fortunately, these historic fire towers are all over the mountains of Western North Carolina, and they’re finding a second life in recent years as they rise above the canopy, offering a rare summit view.

“Everything changed in the ’60s when planes became a less expensive way to detect fires,” says Peter Barr, author of Hiking North Carolina’s Lookout Towers. “The vast majority of towers in the Southern Appalachians were decommissioned between the ’60s and ’80s. Now, we don’t even use planes to spot fires. Roughly 95 percent of fires are reported by cell phone. In the eastern part of the states, they’ll still use them occasionally, but in Western North Carolina they’re obsolete.”

There are 26 of these relics still standing in the state, 24 of them in Western North Carolina if you count Clingman’s Dome, which was built more as a tourist attraction than a fire tower. The last one to be decommissioned was Chambers Mountain, near Waynesville, which was staffed periodically until 2015. The rest have just been sitting dormant.

Barr, who is also the coordinator for the North Carolina chapter of the Forest Fire Lookout Association, has been spearheading restoration efforts of the remaining fire towers over the last decade. Shuckstack was the tower that originally piqued his interest in the structures 14 years ago. 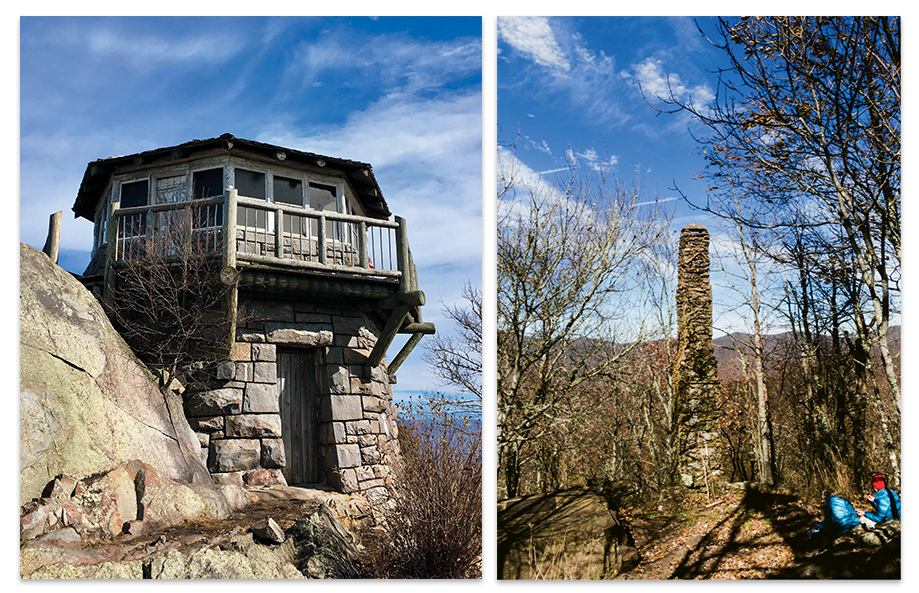 “I was fascinated with their history, and the romantic notion of these towers being lived in deep inside the forests,” Barr says. “I’m sure it was a lonely life, but the view from the [ranger’s] desk was the best in the world.”

It’s the views and the history that led Barr to pursue not just rehabbing the structures, but developing a hiking challenge that raises awareness of their locations and their plight. “Most of the towers had been removed by the time I got involved, and the ones that were left were in disrepair,” he says. “They don’t have any practical purpose, so it was hard for land managers to devote resources towards them. But they make cool destinations for hikers.”

Working with the Carolina Mountain Club, Barr used existing hiking challenges like the South Beyond 6000, which test hikers to summit 40 different 6,000-foot peaks in the region, as a model for the Lookout Tower Challenge. Hike to each of the lookout towers still standing in North Carolina, and you’ll get a patch from the club. The hikes that lead to the towers can range from a half-mile stroll like the Panther Top Tower, to a 12-mile backcountry excursion to the Mt. Cammerer Tower deep in Great Smoky Mountains National Park. To date, only 22 people have visited all 24 towers and received a patch from the Carolina Mountain Club.

Sharon McCarthy completed the Lookout Tower Challenge in 2015. McCarthy, who considers herself a “list person,” has a knack for hiking challenges, knocking out the GSMNP 900 (hiking all trails within the park), the Pisgah 400 (all trails in Pisgah), and South Beyond 6000. She says that last one was the toughest, but not necessarily the most rewarding. “You get to the top of some of those 6,000 footers, and you don’t have any view or waterfall or anything. With these towers, there’s always a reward.”

Shuckstack was McCarthy’s first tower, and she says she was hesitant to climb it because it was in such bad shape. “I thought I was going to die on that hike because it was so hard, and then the tower looked so rickety when I got to the top.”

Barr remembers what Shuckstack looked like 14 years ago when he first visited the structure. The windows were broken, graffiti graced the walls, and stairs were missing. It was indicative of the condition most of the towers were in at the time. “Some of them were so deteriorated and vandalized that the land managers had cut off access to them, removing the stairs,” Barr says. But his advocacy has spurred a renaissance, inspiring land managers to recognize the towers for the destinations that they are. Many of them have been entirely restored in the last decade. The most recent restoration, Rich Mountain, straddling the border of Tennessee above Hot Springs, was completed last fall.

No two towers are built the same. Shuckstack is metal—basically a tall and skinny glorified ladder with a “cab” full of windows perched on top. The ranger who staffed it lived in a separate cabin near the base. Mount Sterling, on the other side of GSMNP, has a similar tower at its summit. Wayah Bald, in Nantahala National Forest, is a stone pillar with an open viewing platform on top. Green Knob, along the Blue Ridge Parkway near Mount Mitchell, has a former live-in cab on top of its 21-foot metal lookout (imagine a small cedar cabin with a deck and an amazing view). The tower on top of Mount Cammerer, in the middle of the Smokies, is easily the most stunning structure of them all. It’s a stone and wood house perched on a rocky outcropping that looks more like a lighthouse than a functional lookout tower.

Observation Station - It’s a seven-mile round-trip hike to reach Shuckstack Tower, which, at 4,000 feet in elevation, offers unparalleled views of the surrounding mountains.

Shuckstack enjoyed a partial rehab in 2014. The stairs were replaced and holes in the roof were patched. It still has a long way to go for a full historic restoration (there are no hand railings on the stairs, for instance) but it’s in good enough shape to climb safely. It’s a beast of a trek to reach the tower though. You follow the Appalachian Trail north from Fontana Dam up to the top of Twentymile Ridge, gaining 2,100 feet during the 3.5-mile climb. Part of the appeal of Shuckstack is the effort it takes to get there, but not many people bother to catch this view—a 360-degree beauty that takes in the Unicoi, Snowbird, and Nantahala mountains, along with Lake Fontana.

The tower comes out of nowhere once you reach the summit, rising from the bushes and tree cover. I’ve spent so much time alone in the woods today, it’s odd to see something so obviously man-made in the middle of the wilderness. Climbing the tower is a bit nerve-wracking: it’s made to give a little, so the entire structure sways in the wind—just a little, but it’s enough to make me pause occasionally as I climb the steps. There’s not much graffiti inside the cab, just some initials carved into the wood. Most of the windows are intact. Standing inside the cab, just like Barr, I try to imagine what it would have been like to live in and around this tower for months at a time. I’d like to think I’d enjoy the solitude—get some real good thinking done—but in reality, I’d miss Netflix and happy hours.

But you can’t argue with the view. Fontana’s waters are impossibly blue, as the lake fills the winding valleys between the fall-tinged slopes of the Smokies. I might not want to live here full-time, but the view was certainly worth the hike. In fact, it’s got me rethinking my dislike for hiking: here, the reward is well worth the work. 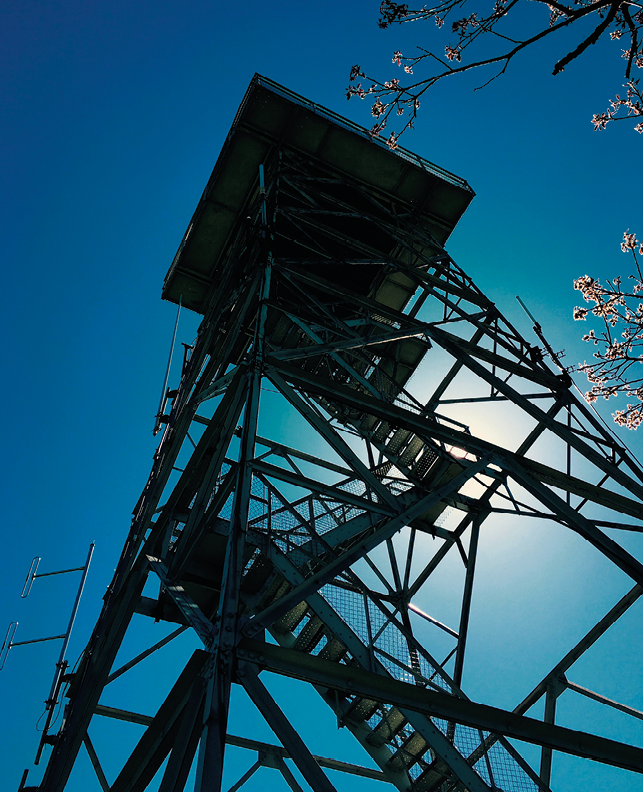 Ascend This - At 70-feet, the tower at Fryingpan Mountain near Mt. Pisgah is one of the tallest lookout towers in the state. (Photo by Jonathan Perry, sweetwilder.com)

And I wouldn’t mind spending the night. In parts of the western US, hikers can reserve historic fire towers just like Shuckstack for an overnight stay. Barr says this is the next logical step for certain fire posts in North Carolina. “I think sleeping in these towers is on the horizon,” he says. “Several district rangers have expressed interest. It would take coordination and upkeep, but there’s a successful model out West, and the revenue the district would receive would help maintain the towers.”

Watching the sunset from Shuckstack and then waking to the sunrise? That would make the hike up the mountain seem trivial in comparison. There’s nothing to hate about that at all.