A Fire Power: Reba Brinkman shows a guy with no gun skills the path to inner peace through clay shooting 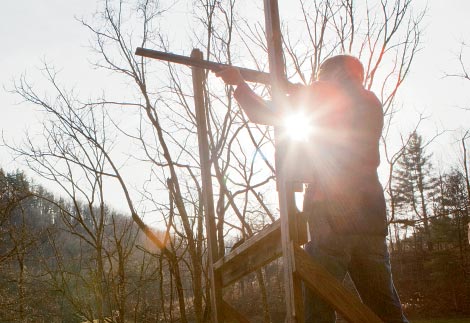 As soon as I hear the muffled crack through the gooey plugs in my ears, my body begins to relax. Actually, relax isn’t the right word: I’m relaxed after three beers. This is something different. I hate to sound all New Age, but this is a deeper inner calm. It’s an unexpected and slightly disturbing sensation considering I’ve just fired a shotgun.

I’m on the edge of Fowler Farms, a 600-acre spread in a narrow valley just south of Hot Springs, learning the art of sporting clays from Reba Brinkman, one of only six female shooting instructors in North Carolina certified by the National Sporting Clays Association. The victim in this particular shooting is a neon orange clay plate about the size of the palm of my hand. It darts from the wooden platform I’m standing on at about 40 miles per hour, and I show it no mercy, blasting the disc out of the air before it reaches the tree line. It’s a beautiful moment of beginner’s luck.

The sport originated in the elite hunting clubs of England in the 1800s, when trapped pigeons were released so hunters could perfect their upland bird-hunting skills. Later, clay pigeons were created, and sporting clays evolved into a pastime of its own. Because of its ties to bird hunting and distinguished English roots, the sport still holds an upper-class connotation. Most people call it golf with shotguns since it’s expensive and follows a similar format. A series of traps are scattered throughout a landscape, and shooters hike from one to the next, keeping score of the clays they hit.

On Fowler Farms, there are 11 traps placed throughout rolling, wooded terrain, but Brinkman and I spend the entire lesson at a single trap with two trajectories; one sends the clay flying across our field of vision about 20 feet off the ground, the other sends the clay away from us at about four or five feet above the ground. Imagine a dog scaring up pheasants; this is how they would fly out of the bushes. Because of the history,  the plates are often called birds, and hitting one is referred to as a kill. In my mind, this is the way vegetarians would hunt.

Brinkman is a bit of an anomaly in the gun sports world. Though clay shooting is gaining popularity with the female set, it’s still a male-dominated recreation. Brinkman seems to revel in the duality; a knife sticks out of one pocket of her Mountain Khakis, a tube of lip gloss is in the other. “Women are usually good shooters,” Brinkman tells me as she tweaks a few mistakes in my posture while I hold the gun. “They have less ego. Children are good too because they don’t overthink it. Usually, the worst shooters are really macho men. The bigger the ego, the worse the shooter.”

Luckily, I have no ego when it comes to gun sports. I also have very little knowledge. Blame it on a steady diet of after-school specials, but I’m simply not comfortable around guns. Until today, the closest I’ve come to shooting clays is playing Duck Hunt on the original Nintendo when I was 11. Putting most of my weight on my front foot, the butt of the 12-gauge Beretta rests firmly against a leather patch on my shoulder and my cheek touches the wooden stock exactly as Brinkman has instructed. The idea is to make the shotgun an extension of my body. According to Brinkman, I’m not aiming the gun, I’m simply watching the clay. If my position is correct, the barrel will follow my eye movement. All that’s left is to pull the trigger and send the plate to clay pigeon heaven. It sounds like a piece of cake, but I’m so far out of my element that just holding the gun feels awkward.

Brinkman takes a simple, three-prong approach when teaching frail fine-arts types like myself: focus, movement, and confidence. Focus on the clay, not the gun. Keep your movement economical—the less you move, the less room for human error. And confidence is everything. I have confidence issues. I’m excited, but nervous. As a result, I wait too long to pull the trigger. By the time I get around to firing, I’ve missed my window of opportunity. “As soon as you see the clay, pull the trigger,” Brinkman says. “Don’t make an event out of it; just pull the trigger. You’re thinking too much.”

I ready myself and do my best to clear my mind as I say “pull” to cue the release of the pigeon from the trap. When I see the speck of orange fly through the sky, I pull the trigger and watch the clay burst into bits and dust. “There’s nothing like powdering a clay,” Brinkman says, congratulating me. The feeling I get is an unmistakable and overwhelming sense of accomplishment akin to hitting a solid 300-yard drive on the golf course, or landing a job, or a hot date. It lifts you all day. Brinkman got into the sport because of that lift. A few years ago, her mother became terminally ill and she found herself the matriarch of the family, taking care of her mom and brothers. So when her younger brother dragged her to a gun range one day, it changed Brinkman’s life.

“I found that for an hour, I couldn’t think about my mother, my responsibilities. You can’t focus on anything else because you’re handling a gun,” she says. “And I was completely recharged afterward—ready to handle life. Shooting became my calm. Some people go to a spa, I shoot shotguns.”The more I shoot, the more I understand the sense of relaxation that comes with such determined focus. Before long, my lesson is over and I’ve left half the plates in tiny orange pieces on the field. Maybe I’m succumbing to my Y chromosome, but sporting clays beats an hour at the spa any day.

Take your best shot
Lessons with Brinkman are $50 per hour with up to three in a group. Target fees range from $25 to $50 according to the number of clays thrown. Gun rental is an additional $10. She also teaches fly fishing. Call (828) 989-3503 or visit
www.wnccastandblast.com.