Home /Feasting on a Trend

Feasting on a Trend

Feasting on a Trend: No Evil Foods rides the plant-based meat wave

There’s a lot happening at The Axis these days. That’s the nickname the No Evil Foods folks have given to their large new production facility in Weaverville. About 90 people work for the company, which makes plant-based substitutes that mimic chicken, chorizo, turkey, and other meats in flavor and texture. And they’re doing so just as plant-based meats are breaking out in popularity like never before.

The company created 70 of those jobs after starting production at the new location last April. Today, No Evil’s products, which include smartly packaged plant-based versions of Italian sausage and pulled-pork barbecue, can be found in more than 5,500 stores in every state in the US. 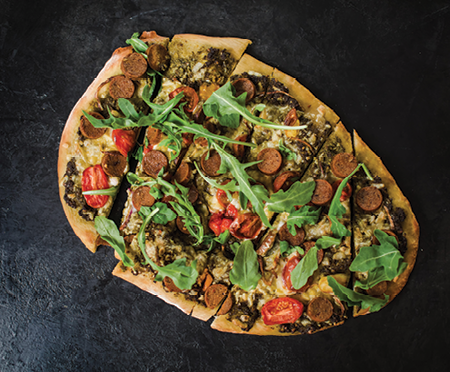 Not Evil at All - Visit noevilfoods.com for vendor locations and more.

The growth spurt has ranked the company among the top five fastest-growing start-ups in Asheville the past two years. Keeping up with the momentum “feels like trying to change a tire on a moving vehicle,” says cofounder Sadrah Schadel. She and cofounder Mike Woliansky moved to Asheville in 2011 and started experimenting with combinations of wheat gluten seitan, vegetables, spices, and other ingredients in their home kitchen. “I’m a super passionate home cook, and when it comes to things that are considered processed foods like plant-based meats, I have very high standards for what ingredients I will or won’t use and high expectations for how I expect them to perform,” Schadel says.

The Axis was so named as a reminder of the impact of their work as a central point affecting aspects such as health and the environment, Schadel says. It reinforces “how we use food as a tool that has the potential to have real and lasting effects on other systems to which we’re connected,” she says. “And it reminds us that we’re all in this together.”