The Fast Track: Trails designed for bikers, by bikers mean thrill rides for all just outside Wilkesboro. 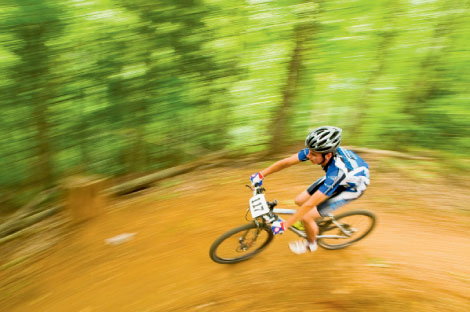 Why is it that locals so often ignore the adventure opportunities in their backyard? I couldn’t stop asking myself that question as I raced through the network of mountain bike trails surrounding W. Kerr Scott Reservoir in Wilkes County.

It’s inexcusable that I’ve passed by this spot on U.S. 421 for years and never pulled off to see this 1,500-acre lake with 55 miles of shoreline, surrounded by 2,000 acres of public land, and more than 20 miles of trails just six minutes from Wilkesboro. So I finally made the drive from Boone with my friend Gerry McDade, a former master-level, time-trial specialist with national wins to his credit, to see what all the excitement was about.

During the last 10 years, Brushy Mountain Cycling Club has partnered with the Friends of W. Kerr Scott Lake and the U.S. Army Corps of Engineers (the agency that manages the reservoir and surrounding land) to forge trails for bikers, built by bikers.

Work began with the roughly eight-mile Dark Mountain Trail near the dam. The club expanded on a Jeep trail by creating single-track loops and connecting to the Yadkin River Greenway. On this route, explained Outreach Ranger Chad Eller, there’s something for every skill level, including experts craving steep rocky runs, log jumps, and even teeter-totter ramps.

Today, four trail systems swirl around the lake. The six-mile, lakeshore Overmountain Victory Trail links the visitors center to Berry Mountain Picnic Area and Bandit’s Roost Campground. There are two more trails on the opposite shore at Fort Hamby Park, but we decided to start our ride with Dark Mountain and devote our last gasps of energy to the newest 11-mile Warrior Creek loop that hems in a huge campground of the same name.

Saddle Up
We didn’t need miles of riding to be wowed. We meandered through cedar-populated bottomlands, caught glimpses of sylvan glades, and skirted emerald green water in quiet coves.

The Dark Mountain course boasts major ups and downs, but overall, the club’s trail boss, Jim Horton, and his core group of seven or so now-expert trail builders have created an exciting layout that’s admirably accessible to nonexperts. Horton and his cohorts are virtuosos when it comes to designing roller coaster rides that are as exciting going in one direction as they are in the opposite direction.

That was obvious after our Dark Mountain ride when we sailed down the OVT from the visitor center to circle a two-mile side-circuit called Shiner’s Run. The trail deceptively milks a topographic line for what seems to be a rousing downhill, but somehow doesn’t require much of a climb on the way back.

Hikers use these trails, too, so most are mini road grades. But the mountain biking mission shines through on luge-like bermed turns. This trail-building technique makes hooting and hollering thrill rides out of corkscrew switchbacks. These turns and artfully executed elevation changes give Kerr Scott a freedom and flow you truly must ride to appreciate.

Careful trail design—Horton strives to keep all grades at less than 10 percent—and soil underlain by bedrock easily thwart erosion and create almost perfect conditions for preservation and recreation. As evidence, I saw only one puddle during our ride. “Our trails are pretty dry right after it stops raining,” Horton says.

As we rode the Warrior Creek track, I became even more impressed. It’s hard to believe, but each consecutive system these folks complete exhibits stronger composition and delivers a bigger bang. But the group doesn’t forsake old territory for the latest and greatest project, Eller says the crews are, “constantly tweaking the older trails. It’s a never-ending process.”

Behind the Berms
Horton envisions a 50-mile trail system, so Kerr Scott seems destined for further greatness. If all this trail building sounds impossible under strapped federal budgets, it is. The credit for the explosion of work goes to volunteers, as well as the Corps of Engineers.

The spark came in 2002, after the Brushy Mountain Cycling Club landed a trail construction seminar from the Subaru/International Mountain Biking Association Trail Care Crew. Then came grants from biking organizations and companies, including REI, Lowe’s, and Burn Energy Drinks (the latter a sponsor of the club’s BURN 24 Hour Challenge, one of two major races held here). Wilkesboro gave $10,000, which was spent on a mini bulldozer, “a watershed purchase for the lake’s trail effort,” says Eller.

By 2006, after 5,000 hours of volunteer work, the first section of the OVT opened as an encore to the Dark Mountain circuit which was already earning accolades, including a National Recreation Trail designation. The following year, Kerr Scott and its trails were named Project of the Year by the Corps of Engineers.

Of course, without the Corps’ cooperation, trail building wouldn’t be possible. “We look at it like the old song, ‘This Land is Your Land,’ ” Eller says. “We’re going to bend over backwards to make this area better for the public. When you have as many dedicated public partners as we do, how can you say no? It’s really gratifying to see people with bikes pull in here every day from all over North Carolina and the nation.”

With the sun dipping low and energy flagging, my buddy and I realized at the same moment that we’d been having too much fun and got sucked too far into the loop to get back on time. So when we saw a picnic table through the trees, we shouldered our bikes and bushwhacked up to the campground. As we stood panting on the road, the lull sparked the first post-ride revelation from Gerry, “Whew,” he wheezed, “that’s gotta be the best time I’ve ever had on dirt.”