Fashion Forward: A couple gets organic cotton clothing off the ground and takes the industry to new heights 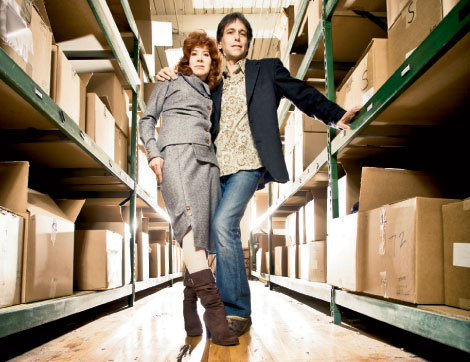 Twenty years ago, Daniel and Marylou Sanders had a simple idea. Instead of making T-shirts with conventional cotton, which compromises the environment, why not use organic cotton? If the husband-and-wife design team could convince clothing companies to switch to organic, they knew the global benefits would be huge. Never mind the fact that no one had ever tried to produce organic cotton clothing on a commercial level. Or that nobody had applied eco-conscious principles to the fashion industry.

“The closest thing to green clothing was unbleached cotton,” says Daniel. “We saw the environmental benefits of organic foods and thought, why not clothing, too?” The couple was living in New York City at the time, designing high-end fashion (runways, models—the big time), but when the bottom fell out of the stock market in 1987, they lost their customer base and needed a new direction.

“We were looking at all our cards, as people do when times are tough,” says Marylou, a petite, impeccably dressed woman. “I thought it was strange that conventional cotton came with a warning label, telling you to only work with it in well-ventilated areas. I started researching the process of growing and manufacturing cotton and discovered it isn’t regulated like food, so farmers can put any kind of chemicals they want on it.”

The environmental side effects of those chemicals are more severe than most realize. According to the Organic Trade Association, 25 percent of the world’s insecticides, a host of herbicides, synthetic fertilizers, and several pesticides that studies have shown to be carcinogenic, are used on conventional cotton crops. The heavy use of these chemicals has a direct affect on wildlife habitat and eventually pollutes ground and surface water sources. Couple that with the social implications of manufacturing cotton clothing in third-world countries where labor regulations are lax, and the Sanders had enough reason to sink their entire savings into creating what is believed to be the first organic clothing line.

“There was no organic cotton when we started this process in ’89,” Daniel says. “Nobody was buying it, and nobody was selling it. It was an empty page. But we got a meeting with Greenpeace—this was when they were producing a lot of products like T-shirts and hats—and we pointed out the irony of printing environmental messages on conventional cotton and petroleum-based polyester shirts. They said if we could find the organic cotton and make the T-shirts, they’d buy them.”

Daniel searched the country for a supplier and found one organic vegetable farmer in California who was growing a small amount of organic cotton as a rotation crop. The Sanders bought all the cotton that farmer had and began spinning the bales into yarn at a small mill in Marion. Not long after, the first line of organic cotton T-shirts was born.

Green Grows
After creating a line of shirts for Greenpeace, the Sanders met with a number of prominent clothing companies, including Patagonia, which many consider today’s leader in mass-produced eco-clothing. Patagonia uses organic and recycled material in a variety of their outdoor garments and created the 1% For the Planet foundation, an alliance of businesses that donate a portion of their profits to environmental organizations. But in the early ’90s, when the Sanderses sat down with Patagonia owner Yvon Chouinard, the company had no concept of eco-clothing.

“Chouinard said ‘all materials pollute, so what’s the difference?’” Marylou says. “We showed him the benefits of organic cotton, as well as the concept of closed-loop manufacturing, where all scraps are recycled along the way. We ended up producing all of their organic cotton T-shirts and shorts for two years until they decided to take organic across the board.”

The Sanderses continued producing private-label organic clothing for name brands including Levi’s throughout the decade and eventually moved their offices from New York to Asheville, to be closer to the workforce sewing their garments. Now, the duo owns and operates Spiritex, a company that provides organic cotton fabric to designers and manufacturers and creates private labels for clothing companies, including Aveda and Nike. They also own SPX, a volume supplier of organic cotton T-shirts for businesses, organizations, and the occasional eco-conscious rock band.

Spiritex’s offices are housed in two warehouses alongside the French Broad River in Woodfin. Cubicles and a small photography studio fill one expansive room. In the other, reside a handful of sewing machines and paper patterns scattered across cutting tables. Clothing samples hang on mannequins, and colorful spools of material are stacked on shelves that almost reach the ceiling.
Today, sustainable clothing is a $2 billion global market. Eco-label American Apparel has reported $250 million in annual sales and behemoths like Nike and Timberland have embraced an environmentally ethical platform. Even U2’s Bono has a line of eco-clothing.

Next Generation
Sustainable is the new black, and the Sanderses aren’t content with their role as pioneers. They’re hoping Poetic Justice, their new line of designer clothes for men and women, will help shape the future of the market. There’s a collection of fleece jackets. Forget the bulky ski jackets you’re used to; these are delicate and refined, meant to be worn to a business meeting. There are women’s suits, maternity shirts, stylish handbags, and vibrant men’s dress shirts, all available at the Spiritex store on Lexington Avenue in Asheville.

“It’s not enough to look at the materials anymore,” Marylou says. “You have to consider every facet of the business, from the materials used to how a company treats its employees. People are so worried about this economy and jobs going overseas, and yet they continue to buy cheap merchandise produced in China. How much are you paying in the long run for that cheap Wal-Mart shirt? You may pay less at the register, but you pay unseen taxes in the form of job losses and environmental damage.”

The Poetic Justice line, as well as the Spiritex and SPX lines, are sewn in the Carolinas. The Sanderses are hoping consumers will pay just as much attention to where their clothes are made. “The more people know about the history of a garment, the better they can feel about it. It’s a very selfish thing to buy green,” says Marylou. “It means you care about yourself, your family, your planet. I say be selfish.”