A Fair Appraisal: Putting a price tag on an eco-friendly home can be a little tricky 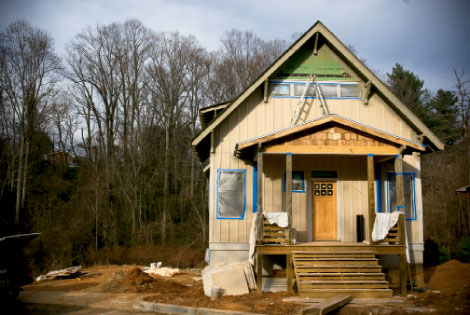 Years ago, when the only people talking about sustainability were the kooks down the road with the composting toilet, no one could say what features like good insulation and radiant heat were worth. Sure, it was easy to figure out what they cost—a glance at the back pages of Mother Earth News told you that. But what would these elements add to a home’s value?

Those were the days of cheap fuel and large lots, when living off the grid was more a point of pride than a cost-savings measure. Today, however, with the polar ice caps melting and utility prices on a steady climb, the demand for energy-saving appliances and nontoxic building materials is growing by the day. Yet for all the new interest in green homes, the real estate industry seems to be having a hard time catching up.

“To be honest, the value of any home’s features really depends on what the home buyer wants,” explains Robert Privott, director of codes and construction with the North Carolina Homebuilders Association in Raleigh. In most cases, says Privott, those wants are still restricted to the things people have always sought: square footage, a functional layout, more bathrooms, quality craftsmanship, and the occasional bell or whistle, such as granite countertops or jet tubs. When it comes to things like on-demand hot water heaters or nontoxic paint, the accounting becomes murkier—or absent altogether.

“Would it make our job easier if we could say, ‘Sure, if you add this feature to a home it will appraise at $500 more, or $3,000 more, or $30,000 more?’ ” poses Matt Siegel, director of the Asheville-based WNC Green Building Council, a certifying agency and clearinghouse for information on sustainable construction. “Yes, of course it would. But we’re just not there yet.”

The simple truth is that the idea of green building as a comprehensive field within the real estate industry is so new that there’s a shortage of valuation data. Most of what there is can be found in the movement’s epicenter: the Pacific Northwest, especially around Portland, Oregon.

“In Portland, we’re in a pretty good position,” explains Taylor Watkins of Watkins & Associates, one of the country’s few real estate appraisers specializing in green construction. “Here, we have more data for green homes in all shades—from light green to dark green. More of them have been built here than in most parts of the country, and more of them have sold. And since there’s so much going on in construction, it’s easy to interview builders and know the cost of construction, as well as the market value.

“Education goes a long way,” adds Watkins. “Appraisers and realtors stand to learn a lot from builders, and lenders do as well.”

Complicating matters is the fact that many of the features that define sustainable construction are squirreled away in attics, walls, and crawl spaces; not the first places home buyers look when shopping for a house. “People tend to not be very excited about attic insulation,” admits Siegel. “For instance, they don’t ask an agent, ‘How do I get up in the attic?’ or ‘Oh, it has R-42 insulation? Awesome.’ ” Insulation may not be sexy, but along with energy-efficient HVAC systems and appliances, it amounts to the low-hanging fruit in the green building world.

Savings gained from energy efficiency are easily quantifiable; think of the yellow tags that the Department of Energy puts on appliances showing their yearly energy consumption. The effort has gone further in recent years with groups such as the U.S. Green Building Council applying its popular and stringent LEED building certification standards to commercial and residential developments.

Beyond efficiency, there are other categories worthy of consideration when appraising a green home, including the added lifespan boasted by a number of green materials. Take for instance Hardie Plank, a type of siding preferred by many green builders for its durability and low toxicity. Installed, the cement-fiber material costs roughly 40 percent more than vinyl. But it also comes with a 50-year guarantee, meaning that your home’s exterior will probably last longer than the polar ice caps.

Even the banking world is waking up to the trend. Fannie Mae, the federally sponsored loan securer, now offers green mortgages, which allow buyers to borrow more to purchase a home that demonstrates considerable energy savings over a conventional alternative. Some lenders are even offering special interest rates for homes with green features. Last spring, for instance, the mortgage giant Countrywide Financial began offering green incentive mortgages that lop 0.125 percent off the current rate on homes that are third-party certified as energy efficient. It might not seem like much in an era of bargain-basement interest rates, but over the course of a 30-year loan, it adds up.

In Congress last year, the House of Representatives proposed HR 6078, a resolution requiring the “consideration of any renewable energy sources, or energy-efficiency or energy-conserving improvements of or features of, the property” for the purpose of appraisals. Although that session of Congress ended before action was taken, similar legislation could appear before lawmakers in the future.

And rumblings in the appraisal world are being felt even closer to home. In January, the North Carolina chapter of the Appraisal Institute held the state’s first seminar on green evaluations at Asheville’s Grove Park Inn, a clear sign that appraisers are trying to make sense of the green-building landscape.

So while it’s true that we could be a few years or more away from being able to say that a green home fetches this or that amount more than a conventionally built home, there’s evidence that the market is beginning to acknowledge the distinction. Siegel, for instance, points to a recent study conducted by his organization and Buncombe County on the local Multiple Listing Service. Given the souring of the real estate market, home prices in general have fallen in the past year. But, he adds, there appears to be at least one major difference between conventional homes and their green counterparts.

“Right now, the biggest added value seems to be with the number of days a house stays on the market,” Siegel says. “For conventionally built homes, it’s averaging about 120 days. For homes certified HealthyBuilt, it’s about 60 days.”

That’s great news for people looking to sell a green house, and a welcome reassurance for those deciding whether or not to invest in one. It turns out those kooks down the road are looking smarter every day. s s s