Home /Eyes in the Sky

Eyes in the Sky

Eyes in the Sky: SouthWings goes above and beyond for a revealing perspective on threats to our landscape 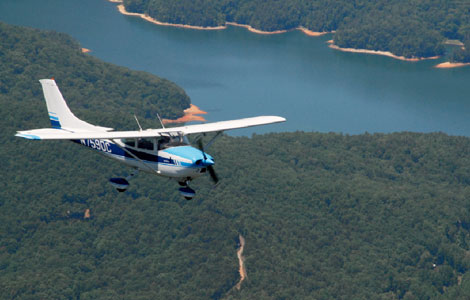 From the ground, the mountains of Southern Appalachia can appear endless, a forested run of peaks fading into a misty distance. From the air, however, the view is more revealing. The mountain landscape is both limited in size and seriously imperiled by human activity; it's been scoured by strip mines, dotted with mountaintop developments, and hatched with logging roads, clear-cuts, and industrially managed forests.

But there is a group bringing these threats into clearer view. Since its founding in 1996, the nonprofit group SouthWings has made conservation of the Southern region a priority and has achieved its goals in an unconventional way—by air. Relying on an all-volunteer roster of pilots, the nonprofit conducts aerial surveys of the region’s natural features, shuttling media, policy makers, and advocacy groups between flash points in the struggle to save the landscape.

“I realized early on how important the aerial perspective is to winning over public opinion on conservation issues,” says SouthWings founder Hume Davenport. “There is so much you can see from a small aircraft that you simply can’t see from the ground.”

A native of Chattanooga, Tennessee, Davenport flew similar missions for the Lander, Wyoming-based conservation group LightHawk before returning to his hometown in the mid ’90s to found SouthWings.

The Southeast, Davenport says, has known more than its share of environmental concerns, from coastal pollution to river sedimentation to deforestation and the detrimental effects of mineral extraction, especially in Southern Appalachia.

The nonprofit’s early reconnaissance flights over the mountains focused on the proliferation of chip mills, which shred trees for use in particleboard and other building materials, often relying on indiscriminate logging practices. More recently, the group has worked with a coalition seeking to bring attention to the practice of mountaintop removal related to mining in the coal regions of Virginia, Kentucky, and West Virginia. By some estimates, more than 500 mountains have been leveled in the past two decades to reach the fossil fuels beneath them. And yet, the damage is not always easy to see.

“I’ve driven the highway along the Coal River in West Virginia,” says Davenport. “And from that perspective you literally cannot get an idea of the scope and magnitude of mountaintop removal. You just cannot see it at all,” Oftentimes, a thin veil of roadside woods obscures the hard truth. But from a plane, he says, the damage to the mountains “is naked.”

Headquartered in Asheville since 2003, SouthWings operations have spread to 11 Southeastern states, from West Virginia to Florida and west along the Gulf Coast to Louisiana. Whether the concern of the moment is for Florida’s mangrove swamps and the aquatic life they support, the water quality of South Carolina’s Pee Dee River (recently rated the nation’s most endangered by the advocacy group American Rivers), or the declining health of the Blue Ridge’s spruce-fir forests, there’s a good that a SouthWings pilot is up there, having a look around. Volunteers donate fuel, flight-time, and the use of their aircraft to the effort. SouthWings also maintains its own aircraft, a four-seater Cessna-182 named Cielo.

Caroline Douglas, SouthWings’ operations manager, describes the group’s work as primarily educational. “Our role is to help inform those who fly with us; people who often have a connection to a broader audience and can share what they see and learn,” she says. “Whether they’re decision makers or part of the media, our flights help people gain a broader and more accurate view of what’s happening on the ground.”

The group supports its work with the help of foundation sponsors, fundraising events, and gifts from individuals. Partners in what Davenport calls SouthWings’ “campaign of edification” have included journalists and policy-makers from the world over. In the past decade, reporters from CNN, the BBC, and The Toronto Star have all gone aloft. Celebrities, too, have come along, including actors Ashley Judd, Woody Harrelson, country musician Kathy Mattea, Backstreet Boy-turned-conservationist Kevin Richardson, as well as longtime environmental activist Robert F. Kennedy, Jr. Plans are currently in the works to take country-music icon Willie Nelson on a flight.

Still, it is the pilots, Davenport says, who remain the “heart and soul” of the SouthWings mission. “We are continually on the lookout for pilots,” he says. “If you meet our requirements, we would love to talk with you.” Indeed, they’re a busy group: Last year was SouthWings’ most active to date, with 174 flights completed, 50 of which were over North Carolina.

With the growing appeal of the mountains for residential development, much of the work in Western North Carolina centers on land-use planning, including steep-slope issues, river sedimentation, and the loss of the region’s formerly robust farmland, with passengers often coming from the river-keeper and land-conservancy realms.
One such passenger was Anne Lancaster, program director of the Farmland Values Project, a UNC Asheville-based study designed to gauge agriculture’s current status in a four-county swath of Western North Carolina. She flew twice last year with SouthWings pilot Tom Komer over much of Henderson County and a good portion of Buncombe County, from Fletcher north to Barnardsville. The flights, Lancaster says, revealed a transforming landscape.
“It brings it home that the landscape as we know it is temporary. It’s changing. It made the work that we’re doing seem more immediate, more critical,” she says. An aerial photographer accompanied Lancaster and Komer on those flights, documenting the scene below with more than 300 images.

“You can see some intact farming communities, especially in valleys where development hasn’t reached,” she says. In other places, large farm parcels are being broken up and sold off. “You end up with large-scale development right next to farmland,” says Lancaster. “It’s a stark difference, especially seeing it from the sky.”
As Douglas puts it, “When you go up, all the issues become integrated, interconnected.”
Even Presidents can learn something by going up—­­­­­and looking down. Earlier this year, the mountaintop removal watchdog group Alliance for Appalachia urged Presidential candidates John McCain and Barack Obama to take a flight together over Appalachian coal fields to challenge their support of “clean coal.” The flight never happened, but the message was sent.

“The broader we can look, the more honest we can be about what is happening, both in an environmental and a values context,” Douglas says. “What do we want our future to be like? The more we know, the better the decisions we can make.”