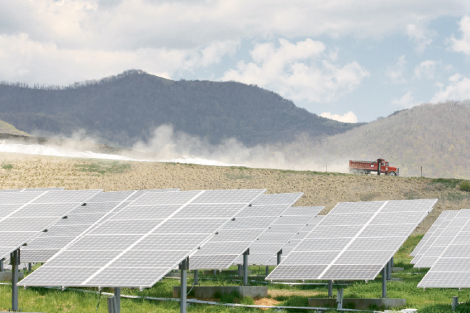 It’s a sunny spring afternoon, and Michael Shore is about to take a group of Buncombe County high school students on a tour of the future. Well, at least the energy part of it.

They stand in front of roughly three acres of gleaming new solar panels, each flat face soaking in the sun’s energy. The sets of cells measure about the same square footage as two parking spaces, and they quietly churn out electrons while producing no smoke, gasses, or waste material. In fact, the only hint that they’re working is the low hum of a nearby transformer as it collects and sends the panels’ electricity to the power grid.

The Asheville company Shore cofounded, FLS Energy, completed the facility just a few months ago. But what makes this project special isn’t just that it’s the first utility-scale solar field in Western North Carolina, but that it also represents a new way to give closed landfills a second life.

Two years ago, after partnering with SAS Institute to build the first large solar field in the Southeast at the software company’s headquarters in Cary, FLS set its sights on bringing a field to the mountains. “Our experience with the SAS project led us to believe that we could do this ourselves, closer to home,” says Shore, who served as a scientist for the Environmental Defense Fund before becoming the company’s CEO.

He, along with a team that included the company’s original partners, started working on the idea of placing their panels on a capped landfill. They approached Progress Energy, which has been working to develop new renewable energy sources across North Carolina, and talked to Evergreen Packaging paper plant in Canton, which maintains a landfill for the waste it generates. A plan began to come together.

“We thought this would be a great use of that property,” says Mike Cohen, a spokesman for Evergreen Packaging. “Our attitude was that if there was a way to produce clean energy from that landfill, we wanted to work it out.”

The packaging company gave FLS a 20-year lease on its land for $1 per year. The arrangement makes sense, because the landfill cannot be used for development or agriculture for many years.

“Evergreen was very generous and open,” says Shore about the land use. “We were able to create a proposal for Progress Energy to purchase electricity from us.” But soon after the utility company agreed to the deal, FLS’s engineers quickly understood that the project would be tricky. What looks like a grassy hill is actually untold tons of waste that are still settling; the hill is slowly compacting and shifting. And this problem was compounded by the fact that the landfill’s contents are sealed under a combination of a protective membrane and soil that can’t be penetrated.

“Normally, you just dig into the ground and create your support for the panels,” says FLS President Dell Freudenberger. “But at Evergreen, there’s no mobility. We can’t even go in the ground an inch on that landfill. So we had to plan everything to lay on top of the ground.”

After conducting geotechnical surveys to learn how many pounds per square inch could be applied to the soil, the company’s designers created a concrete base that was heavy enough to support the panels in strong winds, yet wide enough to keep them from sinking into the ground. And since the hill is still moving, all the connections are designed to flex and shift.

Because of these creative design solutions, Evergreen Solar Farm is one of the first large-scale photovoltaic systems to occupy landfill space in this country.

In all, the project took about two years from inception to completion, but the building phase lasted less than six months.

Now Freudenberger checks his e-mail to track the solar farm’s harvest. Each morning, he receives a chart from Progress Energy that shows a detailed timeline of the previous day’s electrical output. A sunny day will generate a chart that follows a perfect parabolic curve: low output in the morning, climbing high in the middle of the day, and dipping back down at dusk. Periods of cloudiness present themselves as jagged drops in productivity.

Given ideal conditions, the $5 million farm can produce about 550 kilowatts.

According to Progress Energy, that’s enough energy to power more than 50 homes. The facility has the transformer capacity to handle twice that output, and Shore and Freudenberger agree that as soon as the utility company is interested in buying more solar power from FLS, they will install additional panels at the site.

This technology isn’t going to replace energy from coal and nuclear power in the short term, Freudenberger admits. “But there’s a significant portion that we can put on the grid,” he says. “Even if we can get 10 percent of the grid power from these smaller, dispersed systems—we’re at less than one percent right now—that’s a lot of capacity we have yet to fill.”

Already, there is growing interest from towns and counties across the country that are examining how their landfills can generate power and income. And this project proves there is room on the grid—and on the ground—for low-maintenance, quick-to-build, sources of clean energy. As more projects take root, WNC will know the future just happened to start in Canton.