Emily Crabtree: Past Perspectives: Capturing the flow of time in paper, paint, and ink 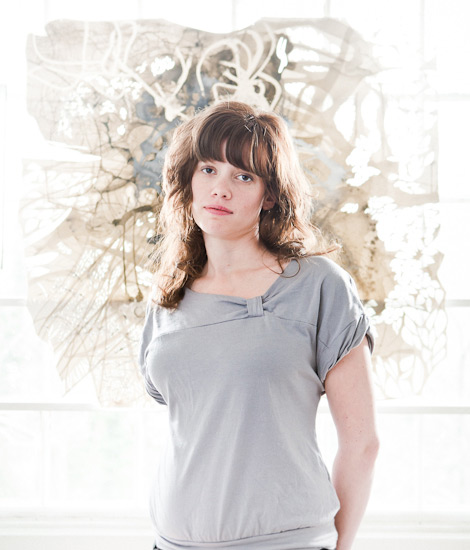 During her senior exhibit, “Fibers of Recollection,” at UNC Asheville last winter, Emily Crabtree fully expected viewers to touch her vellum works. She envisioned them interacting with the pieces, running their fingers across the back of one silky sheet stacked on another to press the two together, revealing bright inky images and a depth to what is at first glance foggy and dreamlike. Instead, many pulled the sheets apart to peek at what hid between. Her first instinct was to step forward and explain her intentions to the viewers, but she stopped and decided to let them create their own interpretations. “To make something that someone else can have a different experience with is very important to me,” says Crabtree.

This openness to alternative experiences ties in with the theme of her works, including painting, drawing, and cut-paper constructions, which play on the perceptions of the past, memories, and time. Whether it’s the sense of ritual and a trance-like state evoked when creating the spiraling lines of Unraveled Space, or the thousands of cuts needed for Fibers of Recollection, a six-by-seven-foot paper construction with undulating waves of flower-like cutouts, the pieces touch on how memories change and the sensed velocity of our lives. “Time is everything in a way and nothing at all at the same time. It’s how we measure our lives and it’s so arbitrary. It can get mixed up very easily.”

Since the fevered pace of production for her show, Crabtree’s life has taken on a calmer momentum. She’s spending more time with her five-year-old son and creating works that carry her deeper inward. One work started with the idea of the heart, internal organs, and muscle tissue. The ink, embellished with pencil and embossing, displays a new desire for space, with much of the paper left untouched by the organic shapes and fluid lines. “There’s more room to rest in there,” she says.

These pieces will be the bridge between her undergraduate work and the pursuit of her master’s of fine arts degree at the University of Oregon in Portland this fall. There and then, she again expects time to speed up. “It’s a totally different life that’s going to happen.”