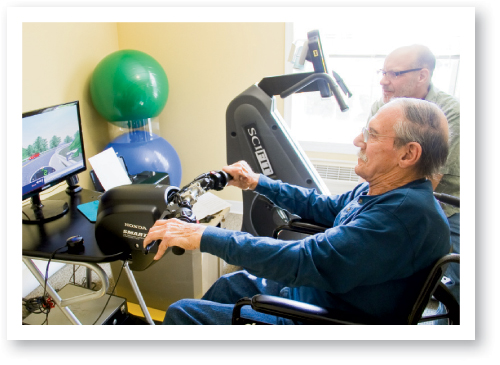 Ask anyone who rides motorcycles and they’ll tell you there’s nothing quite like the thrill of speeding down the open road on two wheels. But it’s also a challenge that requires focus, hand-eye coordination, and quick decision-making. Realizing how these skills can help rehabilitate patients led Garry Segal to launch Motorcycle Therapy. The Hendersonville-based program works with area hospitals and long-term care facilities to exercise patients’ cognitive and motor skills using a virtual riding simulator.

A motorcyclist for 30 years with 20 years of experience in rehabilitation work, Segal created the program last spring after a minor surgery left him temporarily unable to ride. “It was one of the things that I really missed,” he says. “I realized there were others like myself who used to ride motorcycles and probably felt the same way.” Segal presented his idea to Honda, which provided him with the SMARTrainer that he modified to be wheelchair- and hospital bed-accessible. He currently works with about 25 people each week and recently started the nonprofit Let’s Twist Again Foundation, in hopes of keeping the effort afloat. In the meantime, he finds much reward in the work he’s doing. The one-on-one therapy sessions provide patients an interaction beyond their normal routine. “It’s a chance not to talk about mental issues,” he says. “Grip strength, fine motor skills, hand-eye coordination—we’re able to work on those things while not talking in medical terms. We’re talking in motorcycle terms.”