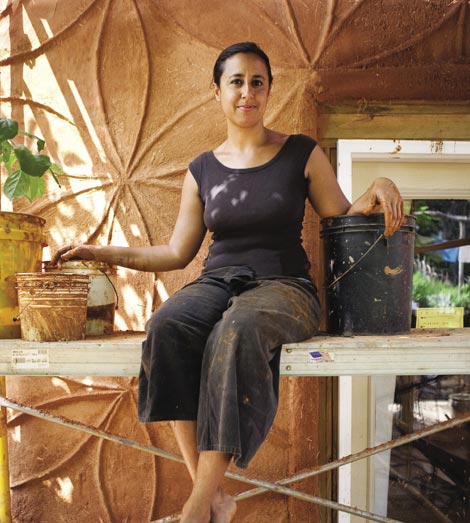 “I’m so in love with what I do,” says Janell Kapoor on the eve of a two-week trip to Turkey. There, the founder of the Asheville-based nonprofit Kleiwerks International will meet with community leaders and once again share her knowledge of sustainable building practices, just as she has in Thailand and Argentina.

When she returns, she’ll move full steam ahead with the group’s latest program, Women of the Americas Sustainable Initiative, or WASI. The plan is similar to the KI’s early efforts to teach others how to use natural resources for construction. But this project will also concentrate on empowering and training women to become environmental leaders in their communities.

Kleiwerks International’s approach blends permaculture, the promotion of sustainable land use, and simple, centuries-old building practices. In each country—the group has worked in Haiti and Laos as well—local materials such as clay, sand, straw, stone, bamboo, and even recycled materials are used to construct dwellings, public centers, and other structures. The benefits are multifold: Not only do people learn to build their own homes, they take an ecologically conscious approach to addressing community needs.

Kapoor originally thought she’d discovered her calling as a young activist in New Jersey working on housing-related issues, but found herself frustrated by constant battles that didn’t foster solutions. In 1996, she moved to Asheville, and after attending a weeklong workshop on sustainable building in Tennessee, she came back energized to pursue a new path. “I’m deeply in love with this planet, and I want us not just to survive, but to flourish,” she says. “My desire is to find ways people can live on this planet that make more sense.”

Her first efforts involved hosting and teaching workshops on natural building and self-reliant living in Asheville. The international roots of KI were planted in 2001, when Kapoor was invited to teach earthen building techniques while visiting Thailand. Rather than working with a handful of individuals as she had in Asheville, she found herself involved with organizations and coalitions of leaders who were eager to share what they learned with others across the country.

One group, Assembly of the Poor, consisted of more than 200,000 farmers looking for means to preserve their traditional way of life. Thailand had been through enormous economic changes. In the past, renewable materials such as hardwood and bamboo were the primary building materials. However, with jungles mostly depleted, housing had become so expensive that buying a home could put multiple generations in debt. The farmers quickly embraced the techniques Kapoor showed them. In turn, the students passed on the knowledge, resulting in a movement that spread rapidly.

A group from Assembly of the Poor, with help from hundreds of volunteers, went on to build the country’s first earthen village. Another workshop alumnus and collaborator, rice farmer Joe Jandai, founded a sustainable living center that teaches organic farming and seed saving in addition to natural construction. It was the first time Kapoor had witnessed the impact of her work multiply. “It helped us begin to see how 10 points of influence suddenly can have 10,000 or 100,000 points,” she says.

Kapoor returned to Asheville, and for the next four years, traveled to Argentina each winter to continue Kleiwerks International’s initiatives. A kindergarten and bakery are among the projects that resulted. The concept of creating outreach through training once again demonstrated how efficiently techniques and knowledge could be passed on. The small organization relies heavily on its 20 volunteers and estimates trainees from 60 countries have, in turn, reached close to a million others.

Kleiwerks International’s team continues to hone its focus as a training organization. With this year’s launch of WASI, sharing building techniques isn’t the only goal; expanding the movement to those who will carry it forward has become a priority.

WASI is a network of women, including delegates who oversee projects and global peers who handle fund-raising and marketing. Participants in WASI’s apprenticeships build start-to-finish projects, learning everything from how to construct walls and earthen stoves to roofing and water and waste systems. They reveal what they learn with visiting groups, as well as document and share their stories with larger audiences. After two to four months of formal training, the women go on to lead follow-up projects. This year, apprenticeships will be offered in bamboo and earthen building on the island of Molokai in Hawaii and earthbag dome building in Canada. Not all the work is tackled abroad. An apprenticeship in natural building near Hendersonville is also on this year’s schedule, and Kapoor and volunteers continue to lead workshops and tours at Ashevillage Institute, a one-acre permaculture demonstration center in town. Also, area women are invited to participate in WASI as global peers.

At its heart, Kleiwerks International is a continuously evolving confluence of individuals who prove the power of people unified by belief and cause. As Kapoor describes it, the organization is a gateway for those who want to literally and figuratively “get their hands in the mud” and have a profound impact on the lives of people around the planet. “What our students have gone on to do is what inspires me,” she says. “How I mark success is teaching the right people. They become their own leaders.”

Get dirty
If you’re ready to sling some mud, Kleiwerks International offers courses and workshops in the Asheville area and abroad. There are several workshops for men and women this summer. The nonprofit also has volunteer opportunities through WASI and Ashevillage Institute. Tours of Ashevillage are available by appointment.