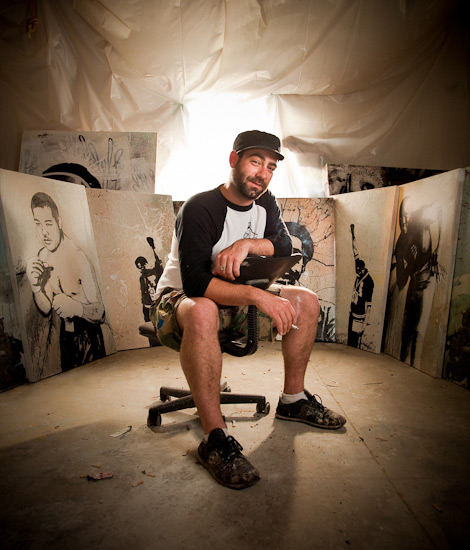 With an art degree from Warren Wilson College and a reverence for aesthetics, Dustin Spagnola once found inspiration in places most people never notice. His earlier works, re-creating the decay of old buildings, were heavily textured with plaster, acrylic and spray paints, and peppered with street art. The depictions of crumbling urban walls were displayed in galleries among high art. Though according to Spagnola, they “weren’t saying anything new.”

Since then, his work has shifted from abstract expressionism to representational art with a new message that both popularizes and memorializes some of America’s marginalized heroes.

The change came when a friend challenged him to showcase humanity’s positive truths, he turned to an image that was at the forefront of almost every American’s mind in early 2008. Titled Patriot & Terrorist, two towering boards showed Barack Obama set against a mottled gray-white background. The piece sold quickly.

Today, a large painting of the Nigerian-born Afrobeat musician Fela Kuti hangs in Spagnola’s studio. It’s one in a body of paintings that portrays the most popularized images of black heroes; individuals whose influences on history are monumental: Martin Luther King Jr., Sojourner Truth, Malcolm X, John
Coltrane, and the list goes on.

At first glance, these immediately recognizable images may come across as pop art. Even his method of digitally altering images found on the Internet, and wheat pasting (an adhesive often used by graffiti artists) them onto his textured backgrounds may seem lowbrow. But Spagnola extensively researches his subjects, and his paintings are intentional and powerful.

“I see a loss of important things,” he says. “The greatest disservice is to not think of everything that has come before us.” Spagnola’s paintings are both an homage to these icons and a study in human virtues. And his newest pieces, larger-than-life images of the Sioux Native American Crazy Horse, push forward in that effort to popularize those who represent greater truths.