Drawing the Line: How a Revolutionary War hero and an Irish surveyor laid a boundary between the land of the Cherokee and white settlers 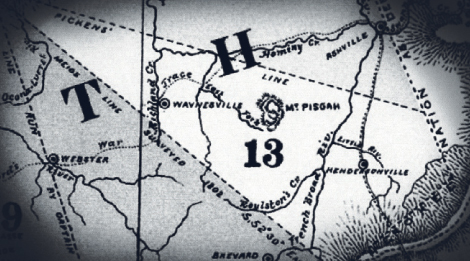 At the turn of the 19th century, there was an uneasy peace between the Cherokee and the ever-growing number of white settlers in the Smoky Mountains. A recurring problem was the boundary designating Cherokee lands from that of the newcomers. Throughout the 1790s, treaties had defined this boundary, and lines had been surveyed at different times. Each line had flaws. One survey left more than a hundred white families on Cherokee land and almost a dozen Cherokee villages in U.S. territory.

In 1801, President Thomas Jefferson called for a survey to draw a new line that would settle the disputes. The task fell to two frontiersmen, Colonel Return Jonathan Meigs, Sr., and surveyor Thomas Freeman. This daunting project required traversing many miles of wilderness from the Iron Mountains of Tennessee, into North Carolina, down to the border with South Carolina.

Freeman and Meigs were excellent choices for the job, in part because both had an unquenchable desire to see what lay beyond the next ridge.

Meigs, born in 1734 in Connecticut, had gained heroic status during the Revolutionary War, fighting at Lexington, Massachusetts, in Maine, and Quebec. At Sag Harbor, he led an expedition that destroyed 12 British vessels without the loss of one man. In 1787, he was one of the earliest to head west, becoming one of the first American settlers in what is now Ohio. He also possessed an exceptional talent for diplomacy, and knew and respected the ways of the American Indians. From 1801 until his death at 89, he was the government agent to the Cherokee, who named him “The White Path.”

Freeman was a brilliant scientist and surveyor from Ireland. Under President Washington, he charted the new capitol of Washington, D.C. He later helped survey the boundary between Spanish Florida and the United States. In 1806, on an expedition similar to that of Lewis and Clark, President Jefferson sent him and naturalist Peter Curtis on an exploration that took them as far west as the Red River in present-day Texas.

The two men faced a delicate situation when they set out in the summer of 1802. Ever the diplomat, Meigs included people from the Cherokee Nation, as well as white settlers in his party.

According to early maps, the course began in the Iron Mountains of Tennessee and generally followed watercourses and other natural features to its terminus at Caesar’s Head in Upstate South Carolina. In effect, it split the
difference between the boundary laid by Colonel Benjamin Hawkins and General Andrew Pickens, and another by Lieutenant Colonel Thomas Butler. But much detailed knowledge of the line, which was observed until 1819, was obscured by time.

But in 1970, Great Smoky Mountain National Park rangers Dwight McCarter, Vinn Garoon, and Joe Kelley set their minds on finding and following the original line. McCarter and Garoon did the tracking, using original maps, an antique compass, what remained of Meigs’ journal entries, and their own considerable backcountry expertise. Afterward, McCarter and Kelley wrote a book titled, Meigs Line, which chronicles the adventure.

“Meigs and Freeman were laying that line when the mountains were first being settled,” says McCarter. Raised in the mountains with an ancestry that includes Cherokee antecedents, McCarter has gained national fame for his tracking skills, particularly for mountain rescue missions. He calls tracking the Meigs Line one of the defining moments in his life. “Like we say in the mountains, these were men ‘with bark on.’ Following in their footsteps was like walking back into history.”

To call it walking is an understatement. Tracing the line meant climbing mountains and using skills akin to those of frontiersmen. What’s more, they were searching for blazes hidden by more than 200 years of forest growth with limited documentation.

“Most of Meigs’ journal was lost during the War of 1812, when the British set fire to Washington,” explains McCarter. “Luckily, Dolly Madison was able to save portions of it, so we had that to go by.

“When Meigs’ survey party set off from near what is now Kingston, Tennessee,” says McCarter, “it was a major expedition of some 60 men, including 20 Cherokee axemen who did the blazing and three Cherokee chiefs. Twenty pack horses carried the needed provisions—potatoes, bear meat, corn, bacon, oats, sugar, blankets, and, of course, rum.”

McCarter and Garoon traveled only with backpacks. Setting their compass to the heading Meigs used (S52°30’E), they left from the same place near Kingston—now called Meigs Mountain.

Meigs and Freeman had delineated the boundary in various ways. They blazed trees using notching patterns such as arrows and crowfeet. They also marked boulders, usually with markings recognizable to the white man and Cherokee. Even unusual land forms and the natural arrangement of trees—three growing in a row, for instance—indicated the line. It’s remarkable that many of these trees and markings survived two centuries. That McCarter and Garoon were able to discover and discern them is astounding.

The marks were sometimes hidden amid thick brambles. In one case, crowfoot notches were 20 feet up a tree trunk because of growth. As they trekked across the mountains, climbing terrain so rugged it taxed even their mountain-hardy constitutions, they kept to the compass.

They discovered long lost traces made by buffalo, and encountered bears, copperheads, and rattlesnakes. At one point, they came to a wide meadow that had hardly changed since 1802. “There was mountain rye grass all about us, interspersed with spruce and fir trees,” recalls McCarter. “We had found one of the camp sites Meigs had mentioned in his journal.”

When they reached Caeser’s Head, they had traveled just fewer than 60 miles. The trip took almost two months, just as it had for Meigs and Freeman. Yet Kelley and McCarter didn’t want the quest to end.

“As we followed the line, in a way we came to personally know the men who had laid the original line. We touched the same places they did. You might say we kind of shook hands with those great men as we followed in their footsteps,” says McCarter. “Tracking the Meigs Line was an experience. It was exciting, beautiful, and sometimes just plain scary. Most of all, it was a rare privilege.”