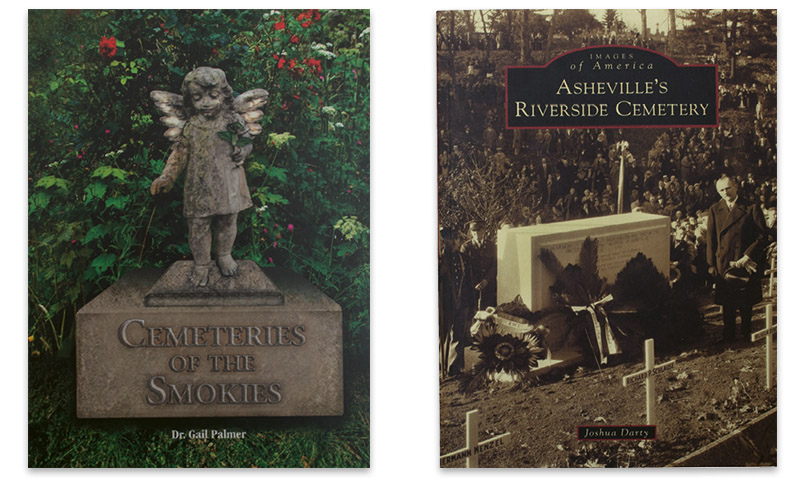 Cemeteries of the Smokies

This book is both a font of living stories and a detailed database of the dead—specifically, those buried in cemeteries that found their ground in the Great Smoky Mountains National Park, most before the park was even envisioned.

Cemeteries of the Smokies pays fitting respect to the families and church folk who couldn’t have known that their places of rest would ultimately fall into public hands or be submerged under water for federal dam projects, despite their intimate knowledge of the normal ravages of time. Few sizable sets of local cemeteries have benefitted from the level of love and collective remembrance that are recorded here.

The author, East Tennessee historian Gail Palmer, combines keen community narratives and tombstone-level specifics with directions, in a thick slab of a book that earns its weight as well as a grave marker.

It’s no secret that Asheville’s Riverside Cemetery is a prime burial ground. Why else would the likes of Thomas Wolfe, O. Henry, George Masa, and Zeb Vance, along with dozens of other notable figures, be interred there?

Digging deeper, Riverside reveals itself much more than the burying place of famous folks. Its idyllic location and complicated history, chock full of fascinating asides, are given new due in this book by Joshua Darty, a 13-year employee of the cemetery who’s been its director since 2013.

Unearthing an expansive array of historic photos and anecdotes, Darty reveals how the cemetery, perched somewhat humbly above the French Broad River on gentle slopes, still holds a wealth of stories that are lying just beneath its surface.