Dance Fever: Make your move with the therapeutic fitness technique of Nia 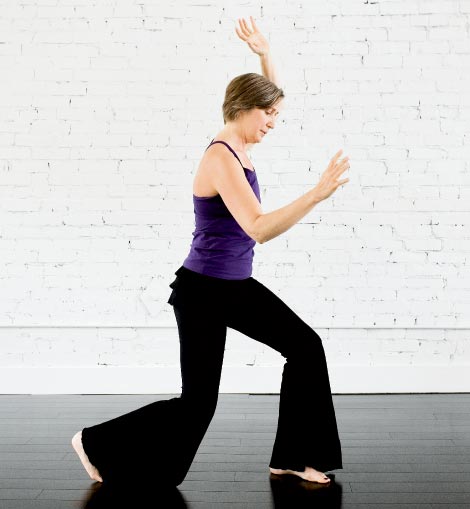 Make your move with the therapeutic fitness technique of Nia

Dancing is an all-or-nothing activity. Bobbing your head doesn’t count. I’m talking about feet moving, knees bouncing, hips shaking, arms swaying, shoulders shimmying, and heart racing. It doesn’t matter what you look like because it feels so darn good when you’re in the moment. It’s one of the purest forms of self-expression.


That body-mind connection, the link between movement and emotion, is the basis of dance therapy and is what persuaded me to step into Jenny Lumb’s therapeutic dance class. She and her husband, Brian, own Nourish & Flourish, an organic juice and tea bar, alternative acupuncture practice, and Asheville’s first Nia studio.


Nia, an acronym for the clinical sounding neuromuscular integrative technique, is a form of dance therapy that arose in the ’80s as an alternative to the high-impact aerobic craze. It melds the mindfulness of martial arts (tai chi, tae kwon do, and aikido) with the alignment aspect of various healing arts (the Feldenkrais and Alexander movement therapy techniques and yoga) and the joy of dance (jazz, modern, and the playful Isadora Duncan style). It may sound schizophrenic, but it isn’t. Like in karate, trained teachers earn belts as they advance, and guide participants through easy routines while encouraging freedom of expression. Nia is meant to offer the benefits of exercise in addition to heightening senses and breaking down inhibitions.

“Every person in class may have a different goal: to lose weight, built strength, or heal emotional pain,” notes Lumb, “but all are supported by the focus of Nia, which is awareness of sensations in the body and presence in the moment.”


Lumb took her first class in 2003 while living in Seattle and fell in love with the practice. The music and the way the teacher encouraged her to make the movements her own hooked her, but it was the benefit of heightened awareness that she says kept her coming back. “Through the classes, I realized one of my patterns in life was not wanting to mess up,” she says. “The greatest gift, for me, has been learning to be playful with myself when I’m not doing things right, realizing that there is no one right way.”


Though there isn’t a “right” way to execute the motions, the routines are choreographed dances comprised of variations of 52 moves that correspond with the body’s base, core, and extremities. Some are meant to strengthen the abdominals, while others promote mobility and flexibility. There is  focus and intention to each session.


During Lumb’s class, I was one of six students who stood barefoot facing a mirror along one wall, poised for instruction. Her welcoming voice and relaxed smile coaxed me to lower my guard and follow along as the upbeat world music picked up pace. Thefocus of this particular class was Dynamic Ease, and the intention was to sense the purpose of the two opposing concepts. The movements started small, with one foot stepping forward and back. Lumb encouraged us to move freely, and hips began swaying, but not in sync. Then she invited us to incorporate arm movements. It was simple, pushing out and pulling in, but the self-expression we each brought to it gave rise to many interpretations. The dynamic and ease focus came through an aggressive forward step, throwing flexed arms and hands out, then easing back. Then we switched, gracefully moving forward and more forcefully stepping back.


As fluidly as the dance began, it transitioned into another movement, then another. Some had the distinct influence of martial arts, such as kicks or blocks that, when put to music, looked like hip-hop dance. Other moves reflected more formal styles of dance. (Yes, the jazz hands came out.) Lumb saved the yoga-influenced poses for the cooldown.


After the early afternoon class, I went back to my office feeling rejuvenated by the hour spent exercising in a way that was liberating. It prompted a moment of pause to reflect on the 10 years of my childhood spent learning ballet and jazz, striving for perfection. Nia reminded me to let go and take in the freeing experience of dance.

Get Down
Nourish & Flourish offers five Nia classes a week ($12 drop-in rate), and Lumb recommends that beginners attend at least three classes to get a real sense of the practice.
www.nourishflourishnow.com