Home /Coloring Within the Lines

Coloring Within the Lines

Coloring Within the Lines: A North Asheville couple brings a historic home tastefully back to life and offers tips on renovating 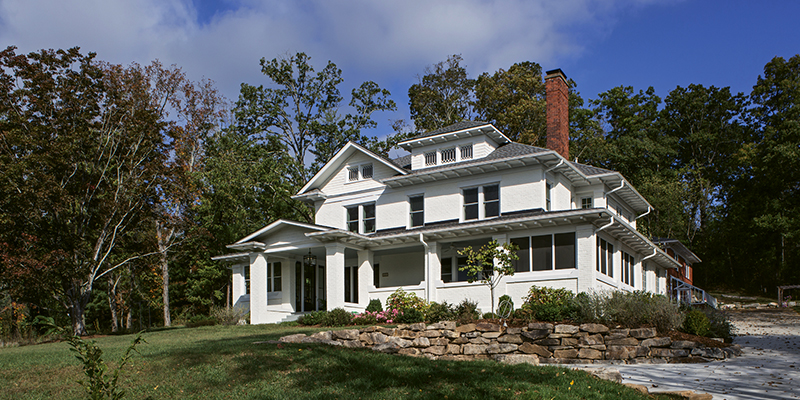 On the dreary January day in 2014 when Carole and Cole Hedden first saw what would come to be their new home, it was raining—both outside and inside the house. Visiting Asheville from Alexandria, Virginia, for a jam-packed day of house hunting, the couple had this early twentieth-century brick home overlooking Beaverdam Valley to consider among eight others. The house had been unoccupied for over 20 years, by humans, at least—a family of raccoons was roosting in the attic. Because it was no longer even on the tax roll, the house was considered by most who looked at it as a teardown, desirable solely for the 11 acres situated at the foot of Elk Mountain.

Although Carole had said she wanted more time to think before discussing the homes they’d seen, on the drive back to Virginia, Cole broached the subject, tentatively asking which house was top of mind.

It turned out the couple was on the same page: The Beaverdam Valley home was it, for both of them. “Money pit!” cautioned their daughter, who had accompanied them on the trip. But still, says Carole, “It hit all the switches.” Cole had always wanted a house with property. Carole, whose father was a builder, had grown up in a house with the same triple-brick construction as this one, and she knew that despite how it may appear, this one was solid. Plus, the size and footprint of the house was right for them. They wouldn’t be doing expansions or additions. It was more a question of “coloring within the lines,” says Carole. Although their dual careers in the aerospace industry have taken them to 14 different homes through the years, this one would be the last: the place they would settle for retirement, even though it’s still a few years away.

There was an emotional pull to the house, too. The couple had just learned they would become grandparents. Carole was hoping for a home that would be a “kid magnet.” “I could just see that grandchild running across the front yard,” she says. So “HGTV-style,” Carole wrote to the owner, asking for their offer to be considered (there was another offer from a buyer who planned to tear the house down). Her approach worked, and they closed on the house about six weeks later, contracting with Brevard’s Platt Architecture and Burnsville-based Tyner Construction for the work.

In every renovation project, there are surprises. For this one, says the project’s lead architect Parker Platt, the biggest surprise was that the Heddens were willing to go ahead with it. The house was “almost to the point of no return,” he says, and projects of that scale take commitment. But on this all parties involved in the renovation agreed: The house had great bones. No one is exactly sure when it was built, but there are indications that it was in the early twentieth century. The Heddens know there was a fire in the 1920s, and it appeared as though the home was at least partially rebuilt at some point. Details such as the pocket doors and bevel-leaded glass windows—still intact—speak to the turn of the century. The couple’s plan was to preserve what was unique about the house but find ways to make it work for what the family needed.

A space under the staircase in the front hall was converted into a powder room (replacing the only other bathroom on the first floor, which had been on a side porch off the kitchen). The kitchen area, a warren of four different rooms, was opened up into a single space fitted with an island made from repurposed wormy chestnut from the barn on the property, designed and built by Mountain Showcase. The same wood was also made into an open kitchen shelf, mounted on brackets from Fletcher-based Screaming Hot Iron. Most of the home’s original pine flooring was salvageable. Miraculously, all of the wavy glass windows in the enclosed dining porch were intact, and only the door leading to a back patio was refitted. The interior plaster was replaced throughout to allow for insulation under new drywall and picture railing, but Carole insisted on leaving at least some exposed brick in the living and dining rooms.

Upstairs, the changes were more extensive. According to Platt’s plan, a sleeping porch and one of the four bedrooms were remodeled to accommodate a laundry room and master closet and bath. One bedroom became a home office for Carole, and the guest room with an en suite bath was left to its original footprint. In all, the reconfiguration upstairs was an inspired use of space that the couple couldn’t have imagined themselves, says Cole.

While the house was being restored, the couple lived in the property’s carriage house, once divided into two separate apartments but now home to a two-bedroom, two-bath apartment and two garages that house the couple’s historic cars, a 1934 Chevrolet Standard Coup (which once belonged to Cole’s great-grandmother) and a 1953 Chevy truck (an anniversary gift to Carole from Cole). The attached greenhouse features iron gears and levers that have been returned to their former function with help from the North Asheville Ace Hardware.

For all the renovation, this is a comfortable family home, not a showplace. Family pictures line the wall going up the stairs. The couple’s love of preservation is evident in the many flea market finds and heirlooms throughout the house, many of which they’ve restored themselves. Cole’s great-grandmother’s Victrola is on display in the dining room, along with china from Carole’s mother and grandmother. The light fixture in the front hall is from Cole’s great-grandmother’s home, and the beds in the carriage house apartment were made for Cole and his brother by his grandfather when they were little. But there are also additions that make it their own. The compass rose in the front hall, for example, is custom made by a mom-and-pop shop in the couple’s home state of Missouri and features the coordinates of the house. It’s a nod to Cole’s background as a pilot and to the Heddens’ commitment to this place as their permanent home.

These days, the wildlife lives outside the house, not inside. Bears are frequent visitors, as are turkeys, which often come right up to the house and peer in the windows. There are still plenty of projects to be done around the house (“We’re never really ‘done,’” says Carole), and Cole’s got his eye on the barn. But the overall project, says Carole, offers the couple the best of both worlds. “We’re surrounded by the rich history of this house that we continue to learn more about, but we’ve also got the best of today.” Carole’s early vision of a grandchild running across the front yard came to pass, too, except now he’s joined by a little brother.