Home /Circling Back to Home

Circling Back to Home

Circling Back to Home: 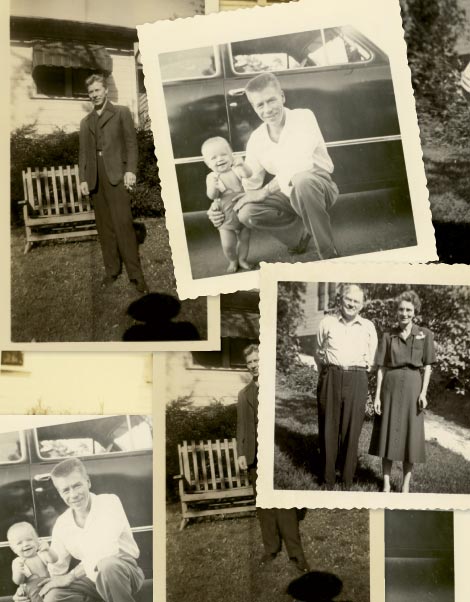 Like some broke-nose Faulkner creation, I’ve circled back finally to the place from which I first came in the green mountains of North Carolina, back into the little house my grandparents built in 1936, back to my father’s roots.

Not long after returning, sitting on the front porch, I had this unexpected vision of how my father must have looked walking up the dusty road to home after four years of war, a man in a uniform, but still a skinny mountain boy joyful to have escaped the Pacific in one piece. There was pure joy on his face, and me just a gleam in his eye.


Even after my family moved east, my father never lost his love for the mountains, and we came back often, the faithful Buick navigating the snaking twists of blacktop. His family was here, and so was my mother’s—her father a Baptist missionary who preached in seemingly every vale and holler for a hundred miles. For both my parents, the mountains were a sanctuary and there always was comfort here. For me, it was an alien landscape compared with the slow hills of the Piedmont, beckoning adventure in the deep shadows of rhododendron and rocky overhangs. In my grandfather’s tow, I studied the countryside from the window of his Pontiac, and then watched the Lord work in mysterious ways as folks congregated in tiny churches nestled in the valleys. In this same house where I am now, I pleaded for my grandmother’s hot scratch biscuits and otherworldly green beans from jars stashed in the hand-dug cellar. But later, except for occasional visits—too often funerals—I stayed at a distance, found other places to explore, put down my own roots, sowed my own seeds.


Then a time came to reexamine my existence and consider other paths as days suddenly slipped away with a seemingly quicker beat. With Thoreau, I considered again his conclusion that many of us lead lives of quiet desperation, and then decoded a guiding message: “Our life is frittered away by detail. Simplify, simplify.” And in a serendipitous twist, the little house suddenly was there, empty and in need of care, but still perched solidly on a sloping hillside under embracing hemlocks. It felt like home beckoning.


I pulled these mountains around me like a warm blanket and let the quiet peace envelop me, healing wounds and encouraging clarity. We always argue in the South, and sometimes brag, that time moves slower here. In the shadow of these mountains—in their youth sky-straight and rocky, now aged and smoothed—it indeed seems true. Something whispers “go slow, there’s really no hurry.” Let your eyes rest on a staggered line of distant ridges backlit by sunset and tell me it doesn’t pull you, at least for a lingering moment, into a calming trance. Or step off the beaten path and let sounds and scents enfold you—a whisper of wind, the shrill shriek of a distant hawk, the seductive melody of a thicketed stream, something unknown scuttering in the leaves.


This same reflective calm is found in the people here, whether native or pilgrims, who succumb willingly to this sense of place and the community it engenders. This acceptance also honors and keeps alive traditions of the sort that disappear in other places where new and fast hold sway. But as Woody Allen, that great observer of American life, succinctly interpreted it, “Tradition is the illusion of permanence.”


It’s that illusion that threatens what appears permanent in our mountains, but looms transitory. With time, I gained a broader vision that revealed the place of my childhood was changed and still changing. With some of the change came the danger of losing those certain special elements that make the western reaches of North Carolina a place some people love deeply and others lust after from afar. Still others, unfortunately, view it coldly as a commodity from which money can be squeezed, often with little concern for what’s left behind. With the love, therefore, comes a responsibility to protect the place, to acknowledge and understand that once lost, it’s often impossible to find a way back.


At the same time, there is the need for jobs and places to live and shop, especially in the small towns and hamlets. Too many of these are places that suffered with the loss of traditional industry, or where economic growth never quite touched—or, yes, perhaps fought to stay the same. Now a new fight is being waged to survive, to be a community that holds and rewards the young, encourages entrepreneurial spirit while protecting the natural state, and honors the individual pursuit of life. This also requires resisting homogenization and respecting things that are authentic. It is, unfortunately, much like hiking a narrow, slippery trail along a ledge where false steps bear a price. Yet, it is an honorable battle worth waging for those who see more than forest-covered scenery and know the heart.


Indeed, native son Thomas Wolfe wrote, “You can’t go home again.” But in truth, Wolfe recognized well the eternal tug of the rocky soul of North Carolina’s mountains and their unique call to return to this special place, to value it for all it has been, is, and will be.

Gary Carter is a writer based in Asheville and author of the novel, Eliot’s Tale. His short fiction and poetry have appeared recently in Dead Mule, Burnt Bridge, Dew on the Kudzu, and Muscadine Lines.