Charlotte: Fine dining, football, and fashion in the boroughs of Charlotte, NC 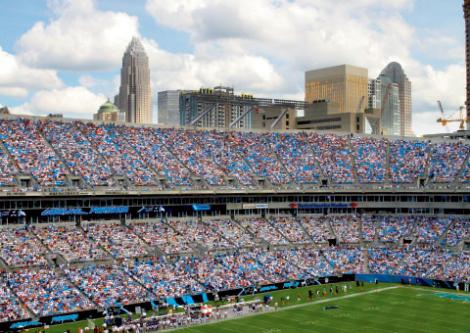 Bank of America Stadium looms up from the landscape, just to the right of the neon JFG billboard, its architectural wave distracting my gaze momentarily from the highway. Perched on the edge of Charlotte’s downtown, it’s on a plot of land many Charlotteans doubted could ever hold its size, now as much a part of Charlotte's cityscape as the intersection of Trade and Tryon streets.

In the fall and early winter, thoughts turn to football, and for many, that means a quick jaunt up I-85 to see the Carolina Panthers play on a crisp, no-cloud-in-the-sky Sunday afternoon. I’d grown up in the Queen City (a nickname that dates back to eighteenth-century England for Queen Charlotte of Mecklenburg, who became queen consort of King George III the year before the city’s founding). But I had come back the past few years only to visit family in the suburbs, so I decided to make it a long weekend visiting my hometown as a tourist.

I exited the highway into the city itself, quickly scooting past gleaming glass buildings and a downtown full of late-afternoon office escapees to the Plaza-Midwood neighborhood, an area northeast of Uptown Charlotte and anchored by Central Avenue where wide, tree-lined streets feed into The Plaza. A freshly brewed cup of afternoon coffee was waiting for me at the VanLandingham Estate Inn, an early 1900s residence-turned-inn with comfortable guest rooms and homemade Southern breakfasts.

Each room is unique and named after notable Charlotteans, and I got the Charles Kuralt room (named in honor of an acclaimed Charlotte News columnist and longtime "CBS News Sunday Morning" anchor), gorgeous in Wedgwood blue. There were fluffy robes, a plush bed, and a good magazine, so I decided to take it easy for awhile and have a sit in the rockers on the porch. Beautifully landscaped gardens, worth a walk through even at this time of year, insulate the inn, and as I sat and rocked, the peacefulness of this space stretched out before me.

Many of the neighborhood shops stay open until 7 p.m., so before dinner, I strolled down Central Avenue and stumbled upon Pura Vida, a mix-of-everything store, filled with brightly colored art, jewelry from India, dinnerware, and even Mexican wrestler onesies for the baby (think Jack Black in Nacho Libre). Other shops that lay in the surrounding blocks included the fashion hipster destination of Boris & Natasha, but it was time to meet some friends Uptown for an even more fashionable dinner.

We decided on Blue, a fine-dining restaurant with a Mediterranean-inspired menu located in the Hearst Building. Blue’s comfortable modern interior and sleek, upscale bar complemented its truly expansive menu (which included appetizers, a cheese selection, a long wine list, and copious dessert selections) along with service that was knowledgeable but not stuffy. The real star of our table was the whole roasted Mediterranean sea bass, which included a deboning and filleting service, tableside.

The next morning it was time to check out NoDa, the funky, historic arts district just north of the city center. The area was just waking up on an overcast Saturday morning, so I had the sidewalks of North Davidson and Thirty-Sixth streets mainly to myself. Resident shop owners readily share the story of this community that is lovingly referred to as “Soho’s little sister.” NoDa began its life as a mill community surrounding Highland Park Mill, which, when it opened about 1904, was one of Charlotte’s first mills designed for electric operation. The building still anchors the neighborhood, although now it houses trendy condos instead of machinery.

Although I was sure not to miss the modern Niche Market and the contemporary crafts of Beet, the most eclectic shopping in the area was definitely the Lark and Key Gallery and Boutique, run by artists/owners Duy Huynh and Sandy Snead. This serene space on Thirty-Sixth Street has a myriad collection of art, from a few pieces of pottery to jewelry and clothing and encaustic works that glow through their layers of wax, evidence that all the pieces were chosen to work together for a cohesive feeling.

All this window shopping had worked up my appetite, so I headed over to Cabo Fish Taco, a Baja-inspired eatery housed in the old Hand Pharmacy, once a social center for the community. Even before noon, Cabo was hopping, still a meeting place for neighbors, and the old tin ceiling and wood floors of the pharmacy added to the kitschy nature of the place. My fish tacos were filled with hot, lightly breaded fish, and they were out of the kitchen in four minutes, a little too fast since I was still focused on the fresh chips and salsa.

But for me, Saturdays in Charlotte have always been about the shopping, so lunch was but a pit stop. Before heading to the Myers Park and Southpark areas, two of the best places to lighten the wallet, I made a stop in the Elizabeth neighborhood at NOFO on Liz, a charming place to pop in for a gift, and—depending on how you’d like to reward yourself—a stiff Bloody Mary garnished with pickled okra. Today I bypassed the restaurant/bar side and lost myself in the decidedly girly collection of vintage hankies, magnets, soaps, dinnerware, and gifts begging to be taken home. And then it was off to Myers Park, Selwyn Avenue, and its boutiques. Tucked into a modest, new shopping center next to the Selywn Avenue Pub was Surface. European in feel, the clothing was a palette of grays and browns and black, showcasing the superior cut and styling of the pieces.

By early evening, I’d checked in at the Ballantyne Resort, which rose out of a newly built area of South Charlotte. My sister joined me, and we headed for Frankie’s Italian Grille in Dilworth (a companion neighborhood to Elizabeth and Plaza-Midwood). It had turned into a gloomy, rainy evening, and although there might have been more authentic Italian in Charlotte (the restaurant is owned by the Lone Star Steakhouse chain), the restaurant’s warm atmosphere was well-documented, and we’d heard about a party they throw every year around Frank Sinatra’s birthday in December. We missed the party the night we visited, but we still felt like celebrating after eating the wild mushroom ravioli, so we finished the meal with a glass of their homemade limoncello, tasting of the sunny shores of the Amalfi coast.

There were lots of other “hotspots” to hit in Dilworth, and afterwards we returned to the well-appointed décor and crisp turndown service of our resort-style room. The city was abuzz the next morning with game time approaching, and although a stop on the new light rail system (that speeds to the city center) was only a short drive from the hotel, we opted for our car so we could skip the tailgating and make a stop in Phillips Place near Southpark for some breakfast at Café Monte, where it was easy to linger over good coffee with the Sunday paper.

I arrived at the stadium a bit more cosmopolitan after French pastries for breakfast, but not so sophisticated that I could resist a painted Panther paw on my cheek. This is Charlotte, after all, where no matter how good the shopping and cuisine are, football usually trumps all.

The VanLandingham Estate Inn & Conference Center, comfortable rooms in a hideaway close to everything. 2010 The Plaza, (888) 524-2020,
www.vanlandinghamestate.com