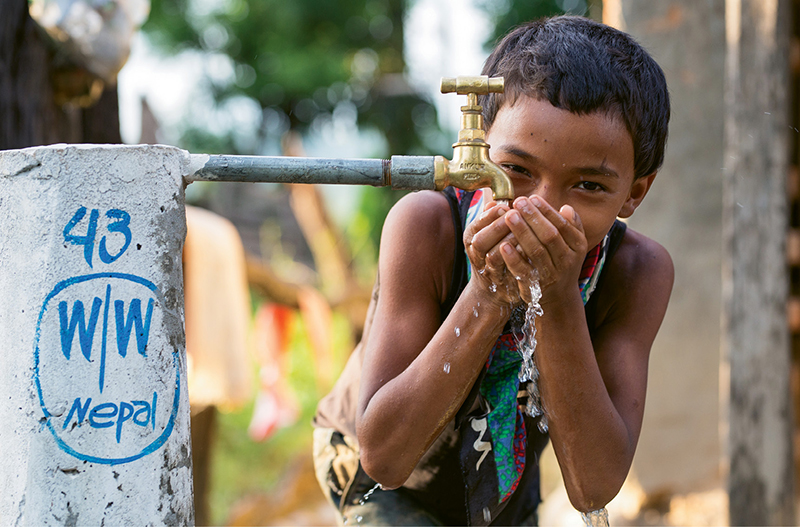 Drink Up - The Nepal program focuses on a sustainable approach to water, hygiene, sanitation, and now agricultural irrigation.

How does one man’s mission become a global force for good? For Doc Hendley, founder and president of Boone-based nonprofit Wine to Water, a late-night revelation propelled him to improve the lives of people around the world.

Hendley was staying at his parents’ house in Boone in 2003. A bartender by trade and a dreamer at heart, he woke up in the middle of the night with a phrase rumbling in his mind. As the son of a preacher, he was very familiar with the idea of turning water into wine. But what if wine could be turned into water? “That was the night I learned about the global water crisis,” he remembers. It was also the first spark of his organization Wine to Water, which has now brought clean water solutions to people the world over through wine fund-raising events.

In 2009, two years after Wine to Water became an official nonprofit, WNC magazine reported on Hendley’s early efforts. At the time, he had succeeded in providing sustainable water systems to more than 25,000 people in four impoverished countries. Today, that number is exponentially greater, and that’s not to mention the countless volunteers nationwide whose lives have been impacted by the service work. Now, 10 years later and just in time for World Water Day on March 22, we look back at just how far this local champion of change has come.

Hendley hosted his first charity wine tasting event, which he dubbed Wine to Water, in early 2004 in Raleigh; it was the first of many. He soon had raised thousands of dollars, but still had to figure out how to turn the money into drinkable water. Rather than donate to an international aid organization, he turned his sights toward one of the most volatile places in the world at that time—Darfur.

The Darfur region of Western Sudan was ravaged by genocide in 2004. Militia groups burned villages, murdered civilians, and polluted essential sources of water. Hendley wasn’t willing to read about the crisis from the comforts of home, so he packed his bags and went to Darfur with the Boone-based humanitarian aid organization Samaritan’s Purse.

He says he had never witnessed the poverty and destruction he saw in Darfur. “I grew up in the Carolinas, in a somewhat conservative Christian home. Darfur is a 95-percent tribal, black, African-Islamic community. There couldn’t have been a more opposite place on the planet for a guy like me to be living,” he says.

Yet he formed deep connections with the people he met. “I was so amazed by how much I just fell in love with the people and the culture, and how loving and embracing they were,” he says.

He wanted to understand the problem from their perspective. “I decided to follow these women and children, to walk with them, to go where they were getting their water,” he remembers. “It was such a shocking experience to walk hours through the sub-Saharan desert to get to this little muddy water hole and realize this is what they’ve had to do every day, twice a day, for their entire life.”

During his time in Darfur, Hendley helped install water systems in villages that were destroyed by genocide. It was an intensely dangerous situation, and two of his team members were killed.

One year later and armed with an understanding of sustainable water systems, Hendley returned to North Carolina to continue his Wine to Water efforts. He worked other jobs for a few years until his wife urged him to focus on the organization full-time. And so in 2007, Wine to Water officially become a nonprofit.

Since its founding, Wine to Water has expanded its reach to hundreds of communities in over 30 countries and opened international offices in Nepal, Colombia, Dominican Republic, and just recently, Tanzania. The organization reports that over 750,000 people now have access to clean water through its programs.

Wine to Water operates by building relationships with people living in the region they’re serving, and employs a team of nationals who work with villagers to improve their access to water. They rehab and drill wells, install filters, construct latrines and hand-washing stations, and educate about hygiene and sanitation. Hendley says it’s a different approach from other relief organizations.

“We started by going around fixing the wells, and then we realized that the main problem isn’t just that the wells are broken,” he says. “A lot of times, organizations weren’t teaching people about the well and how to maintain it and how to keep it up.”

Instead, Wine to Water offers people water purification items that they can maintain themselves. Some of these hand-held filters, like the Sawyer Filter, are assembled by volunteers in Western North Carolina and beyond. Maintaining local ties is important to Hendley, and it’s part of the reason he has kept the organization’s headquarters in Boone.

Wine to Water’s CEO, David Cuthbert, moved from Philadelphia to Boone to join the organization in 2014. He had a decade of experience as a special operations officer in the Navy, and many years growing businesses from scratch in the private sector. “I wasn’t seeking out an NGO job, but it did intrigue me,” Cuthbert remembers. “It really did tug at the values my wife and I have—the values of serving and helping folks.”

Wine to Water became more efficient when Cuthbert joined the team. They narrowed in on the places where Wine to Water could have the most impact and worked on community development and relationship building in those regions.

They also deepened ties with people in Western North Carolina. The majority of Wine to Water’s directors and staff are based in Boone. Although Hendley and Cuthbert received offers to relocate to other parts of the U.S., they chose to stay in WNC. “Every time we began to look into it, to get off the mountain, it just never felt right,” Hendley says.

Hendley says approximately 1,000 people have volunteered internationally through Wine to Water, including many students from Appalachian State University and local high schools. He estimates that 40 percent of the volunteers who travel to the four international outposts are from Western North Carolina.

Henry Kelso, a student at Asheville High School, is among the 362 volunteers who logged over 50,000 hours of work across seven countries last fiscal year. He traveled to the Dominican Republic in 2018 when he was 17 and worked building and distributing ceramic filters. He was impressed by Wine to Water’s approach of helping villagers engage with long-term solutions to improve their own access to water. “When we gave them the filters, I saw a lot of families smile because they knew that they were the ones who were making their lives better,” he says.

But not all of Wine to Water’s supporters are out in the field. There are now 15 Wine to Water chapters in cities across the United States that host wine tasting events and raise dollars for the cause. Members of The Tap are donors who give monthly. And since the organization has partnered with both a winemaker and a chocolate producer, anyone who purchases a bottle of Wine to Water wine or one of their branded chocolate bars is giving back. Last year, sales from the wines brought in nearly $150,000 for the nonprofit.

It’s now been 10 years since Hendley was named a CNN Hero, and the television station produced a 40-minute documentary about Wine to Water. Looking ahead at the next 10 years, Hendley has big goals. Wine to Water plans to add new programs in Myanmar, and also aims to deepen community ties in the countries it currently serves and engage more volunteers in those communities.

Primarily, Hendley wants Wine to Water to become more sustainable as an organization. “We look at it in the field and ask ourselves how we can be most sustainable in our programs there,” he says. Wine to Water also aims to diversify its income by expanding corporate partnerships where people who are unable to volunteer internationally can build filters in the U.S.

With World Water Day coming up, there are ways for people in WNC to help improve water access around the world. Wine to Water’s local headquarters is above the Ransom pub on King Street in Boone. “Every time somebody goes down there and buys a glass of wine or a cold drink, or a meal,” says Hendley, “they’re helping to support the efforts that we do upstairs.”

“There’s just something so special about this community in Boone that has helped us become who we are as an organization. I think vice versa, too,” Hendley says. “We really believe we’ve had a positive impact on this community.”

To learn about opportunities to donate, volunteer, and other ways to give, call (828) 355-9655 or visit winetowater.org. Check their social media for local World Water Day events in March.