Center Square: Two-hundred years of growth, change, construction, and life in the heart of downtown Asheville 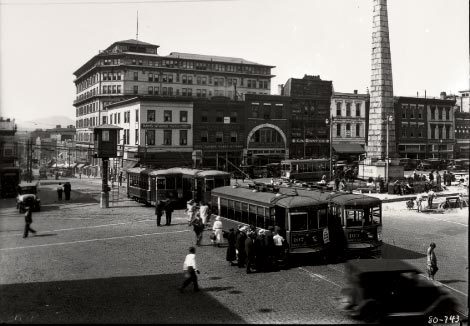 Asheville’s cityscape, much like its surrounding landscapes, exists as a living ecosystem. It has grown, suffered, evolved, and thrived alongside its inhabitants and businesses—each one holding a stake in how the area has developed.

Nowhere is that process more readily evident than at the city’s center, Pack Square. Since the town’s fathers built the first courthouse of logs during Asheville’s infancy in the late 1700s, to the time when George W. Pack deeded the land to the city in 1901 to create a permanent park, to the later half of the 1900s when the area reinvented itself as a destination, the square has been in constant flux.

As Asheville prepares to celebrate the completion of Pack Square’s newest aesthetic incarnation, it’s fitting that we look back at how the park grew and changed to meet the community’s needs over the last 200 years.