Home /A Celebration of Community

A Celebration of Community

A Celebration of Community: A lifetime of cherished memories from the Campbell Folk School Fall Festival 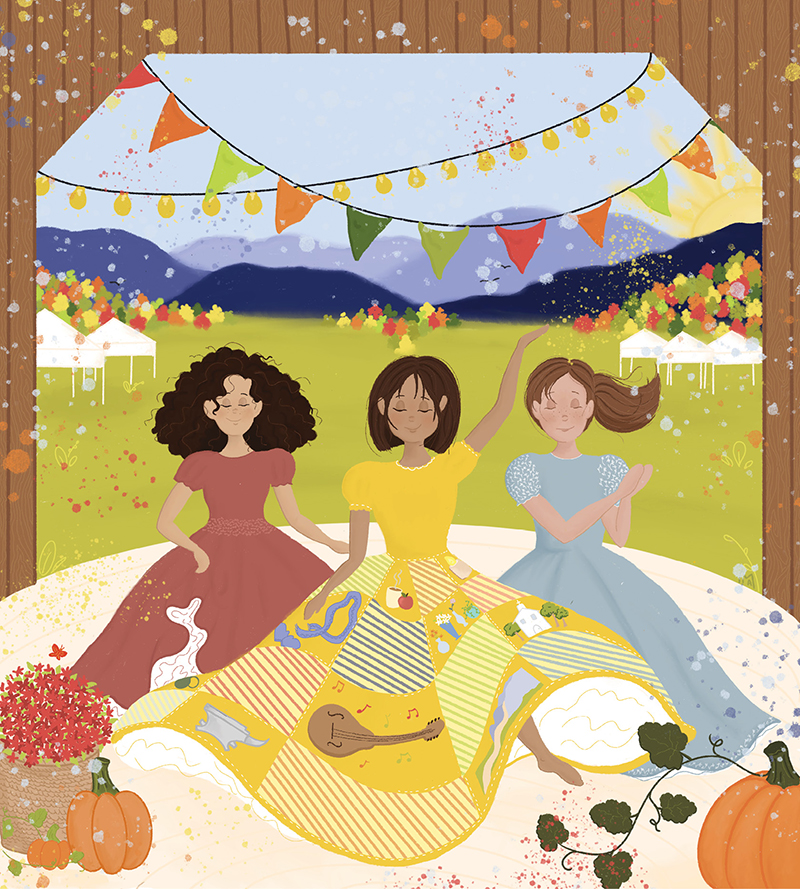 Editor’s note: The John C. Campbell Folk School, in Brasstown, usually holds its Fall Festival each October. This year, as last, the school is suspending the beloved gathering in light of ongoing pandemic concerns. Anticipate the festival returning next fall, and in the meantime, we’re pleased to share this essay of remembrances from a local festival devotee.

For most of the calendar year, the festival barn stands empty, but on the first weekend of every October, it becomes a beacon for fall festival-goers, coming alive with Appalachian music, dance, artisans, and regional culinary delights, the Blue Ridge Mountains a fiery backdrop against a cloudless, brilliant Carolina blue sky. As you turn on Settawig Road, you will likely find yourself part of a convoy of cars, a pilgrimage really, snaking their way through the rolling hills, passing pottery shops and artisan studios, turning at Clay’s Corner—home of the “Possum Drop”—with the John C. Campbell Folk School slowly coming into view.

On any given morning, this pastoral landscape is awash in the soft golden glow of sunlight peeking over the ridgeline burning off the morning dew and lingering fog that blankets the picturesque mountain valley in Brasstown, dotted with as many churches as barns. And oftentimes the festival itself seems to signal to mother nature, whispering “It’s time,” while ushering in the season’s first frost.

That is how I remember it. It seems I have always looked forward to the festivities that celebrate the heritage of these mountains and an abundant summer harvest. Established in 1925 to preserve and share Appalachian craft and techniques, the John C. Campbell Folk School is one of the oldest of its kind in the country, offering an array of week-long classes such as blacksmithing and metal forging, carving and chair making, quilting and basketry, pottery and painting, throughout the calendar year. The folk school transforms people. It is where some come to heal, some to recharge, and some to simply learn a new skill. It is where creativity, sustainability, and conservationism are richly nurtured, shared, and celebrated, where everything the eye can see is mountain-made. Food, art, and music are things that have the potential to bring people of all backgrounds together, and the fall festival sits at the intersection of all three.

That is how I remember it. As a child, going to the folk school was something singularly special. Sometimes I went with my mom and little sisters, but as I grew older, like most kids in this area who grew up going to the folk school, occasionally I volunteered, helping out in a local church food booth serving hot cider while raising money that would fund mission trips in the coming year. As a teenager, I walked around with other local kids, listening to music rich with the sounds of dulcimers, banjos, fiddles, mandolins, and harmonies that seemed to seamlessly blend the voices of those in family bands. We wandered around the grounds, meeting up with friends from neighboring schools, visiting vendors, and in our reverie we sometimes just lazily soaked up the afternoon fall sunshine while watching youngsters with their parents. We participated in contra dancing and games and reveled in learning from artists and craftsmen who offered demonstrations in such skills as soap and candle making, weaving and quilting, gardening and cooking, the blacksmith’s hammer echoing in the distance.

I remember sitting at the feet of a Brasstown carver, us on the wooden steps of one the school’s surrounding buildings, he in an old rocking chair on the porch. His worn, calloused hands deftly whittled away the hours, breathing life into birds and other animals, contoured wings slowly emerging from blocks of wood.

Sometimes we visited a weaving demonstration, the weaver an old family friend. She patiently handed squirming children wool to card, while she talked about creating beautiful, berry-colored tapestries, mittens, and scarves, the shuttle of her loom syncing with the ticking of time.

Remembering this, I think of Job: “My days are swifter than a weaver’s shuttle, and are spent without hope.” Occasionally, we were rewarded with the task of spinning the carded wool into yarn, to us a magical transformation. And year after year, we filled our bellies with lemonade and kettle corn, slow-smoked barbecue and slaw, caramel apples, and homemade apple fritters. We were secure in this fact: that this place, at this time, was home.

That is how I remember it. As my sisters and I grew older we brought our children to the festival, a tradition that became part of the fabric of our family, an annual reunion, a time of reconnection. We took family snapshots sitting on bales of hay decorated with colorful mums, gourds, pumpkins, and dried corn stalks. Three generations wandering through the festivities, which over 45 years have grown to include more than 200 artisans and food vendors. We introduced our little ones to the magic of these mountains and the people in them. Older cousins took toddlers by their sticky hands, aunts carried the smallest on their shoulders, the music carried to us on the wind.

And that is how I remember it. While the fall festival may be a destination spot for people from all over the Southeast, it nevertheless remains our festival. It is a gathering of our community, where you will likely run into neighbors, church family, teachers, and well, friends. Because that’s what the festival is—it’s a gathering and celebration of a community, a celebration of a season, a place, a people. It has always been a beautiful exchange and commemoration of mountain heritage, culture, and craft that honors traditions and human relationships. And the world, now more than ever, needs more of that.