Celebrating Doc: This year, MerleFest honors the life and legacy of one of the country's greatest pickers 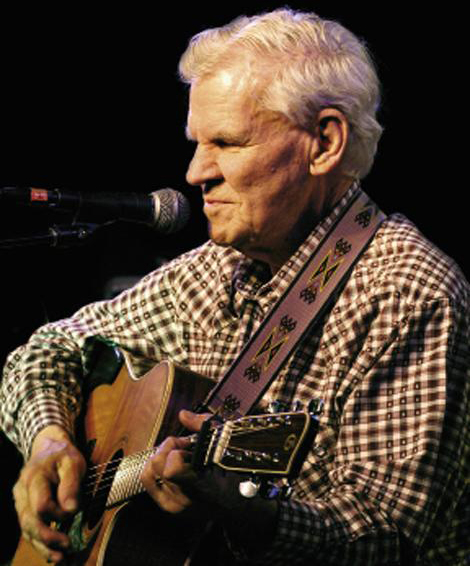 Grammy award-winner Sam Bush will always remember the first time he met Doc Watson. It was in 1972 at the Walnut Valley Flatpicking Championship and Festival in Winfield, Kansas. The band New Grass Revival, which Bush played in, shared the bill with Doc and his guitar-picking son, Merle.

Winfield was the first stop on a tour the musicians made together, playing concerts from Kansas to California. The brand of bluegrass Bush’s band played was pretty far removed from the traditional music the Watsons favored, but they’d all hang out between sets in Doc and Merle’s camper, listening to The Allman Brothers Band.

“Merle mentioned to Doc one time that some people don’t like Sam’s long hair and beard, which of course Merle had lots of too,” Bush writes in the program for this year’s MerleFest, April 25-28. “Doc said, ‘Son, from where I sit, it all looks the same.’ That’s the way Doc was,” Bush says. “All people were the same and equal.”

Doc’s love for others will be returned multifold at this year’s festival, the first since he passed away in May 2012. This musical celebration created to honor Merle, who died in a tractor accident in 1985, comes full circle to honor his father. “We will definitely be missing Doc,” festival director Ted Hagaman says, “but I’m sure he’ll be with us spiritually.”

The first MerleFest in 1988 was organized to raise money for the Eddy Merle Watson Garden of the Senses at Wilkes Community College. The event has grown into a four-day festival that attracts nearly 80,000 people. This year, 90 acts will perform on 14 stages.

Bush, a longtime collaborator with Doc, will host a special tribute set on Saturday with several of the late musician’s friends and fellow players. A video of highlights of Doc’s life and performances will be aired throughout the festival.

Among the acts scheduled are The Avett Brothers, The Honyecutters, Tift Merritt, Peter Rowan, and Nitty Gritty Dirt Band, whose influential album, Will the Circle Be Unbroken, helped push Doc into the national spotlight in 1972. Fittingly, the album is being reissued on vinyl for its 40th anniversary.

“Fans around the country and around the world are all posting comments on the festival’s Facebook page saying they have to be here this year to help honor Doc,” says Amber Herman, the festival’s public information officer. “There’s just this reverence that everyone feels.”

“People can expect a celebration of his music,” Hagaman says. “We’ll always carry on that tradition because that’s the way Doc would want it.”

Correction: The original printed version of this article contained incorrect information on the number of stages at MerleFest. It also did not fully identify a quote from Amber Herman, the festival’s public information officer. We apologize for the errors.