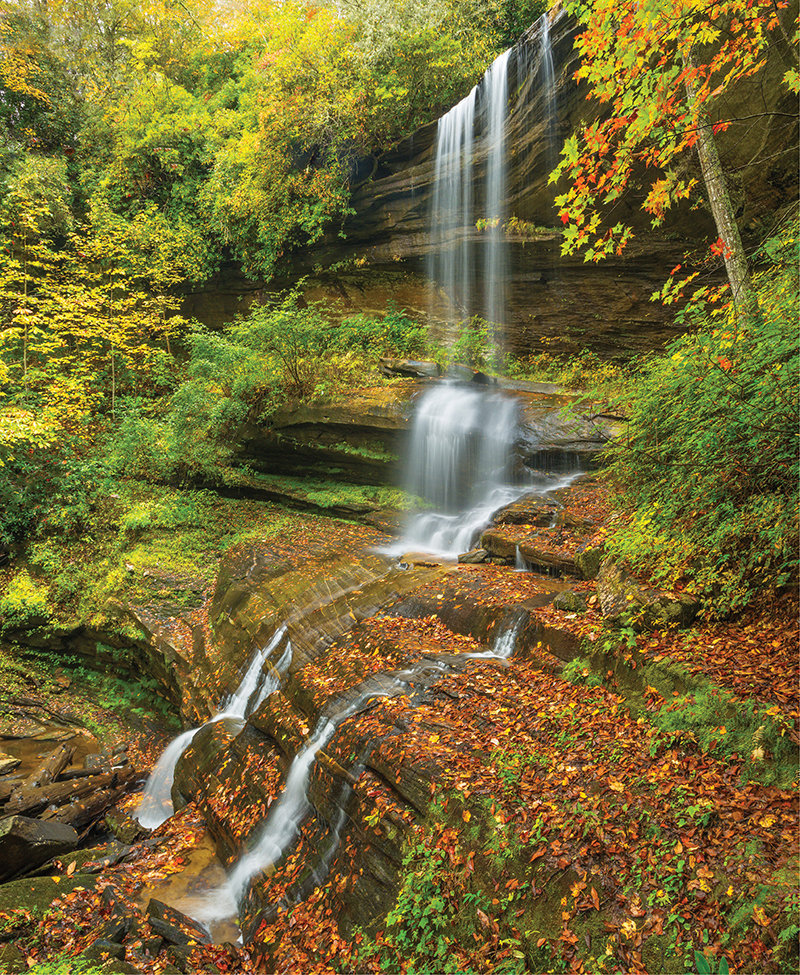 Waterfalls do so much for the people of North Carolina: they provide stunning views, harbor specialized ecosystems, boost the tourism economies of mountain communities, and soothe troubled minds.

So, it’s about time, says photographer and author Kevin Adams, that we do something for them, which is why he and several other dedicated “waterfallers” (hikers who seek out and photograph the state’s hundreds of cascades) worked for more than a year to form a group called Waterfall Keepers of North Carolina. They announced their plans in November 2020 and rolled out a website with the stated goal “to preserve waterfalls and facilitate their enjoyment in perpetuity.”

The seed of the organization was planted in late 2019, when Adams gathered a group of hikers to organize waterfall “sweeps,” sending teams of volunteers to pick up litter and perform routine trail maintenance across the state.

The first one is scheduled for March 20, and the Keepers have also launched an Adopt-a-Waterfall program, which calls for volunteers to regularly visit their chosen cascades, keep an eye out for threats or degradation, and remove garbage. “But I don’t want people to get the idea that we’re just a group of people picking up trash,” Adams says. After thinking more about the cleanups, he started talking with fellow waterfaller Holly Bass about all the other initiatives they could and should take on.

“It just kept growing and growing and became a full-blown organization to support the waterfalls,” says Adams, the group’s executive director, who lives in Waynesville. The group will include a Junior Keepers program to encourage children to appreciate waterfalls, as well as field trips and presentations for both young people and adults. “We’ll give talks to whoever wants to have us,” says Adams.

These talks will emphasize the safe exploration of waterfalls, which claim the lives of several hikers and swimmers each year, notes Brenda Wiley, a Keepers board member and treasurer. “People see the very gentle water flow a hundred feet or so upstream and have no idea how much power a couple of inches of water can generate.”

The Keepers plan to promote the scientific study of waterfall ecosystems, called spray-cliff communities—the collections of mosses and ferns that thrive in the continuous moisture created by waterfalls. Working with land management organizations, including state parks and national forests, the group will also remove graffiti and maintain trails with trained and certified crews.

Though the Keepers is not a political organization, Adams says, it will engage in activism, developing and sharing information about the value of waterfalls to the state’s tourism industry and speaking out against any ecological threats to them. “If there is something proposed that will have an adverse effect on waterfalls, I would consider that a resource issue and a conservation issue,” he said. “We will absolutely address that.” 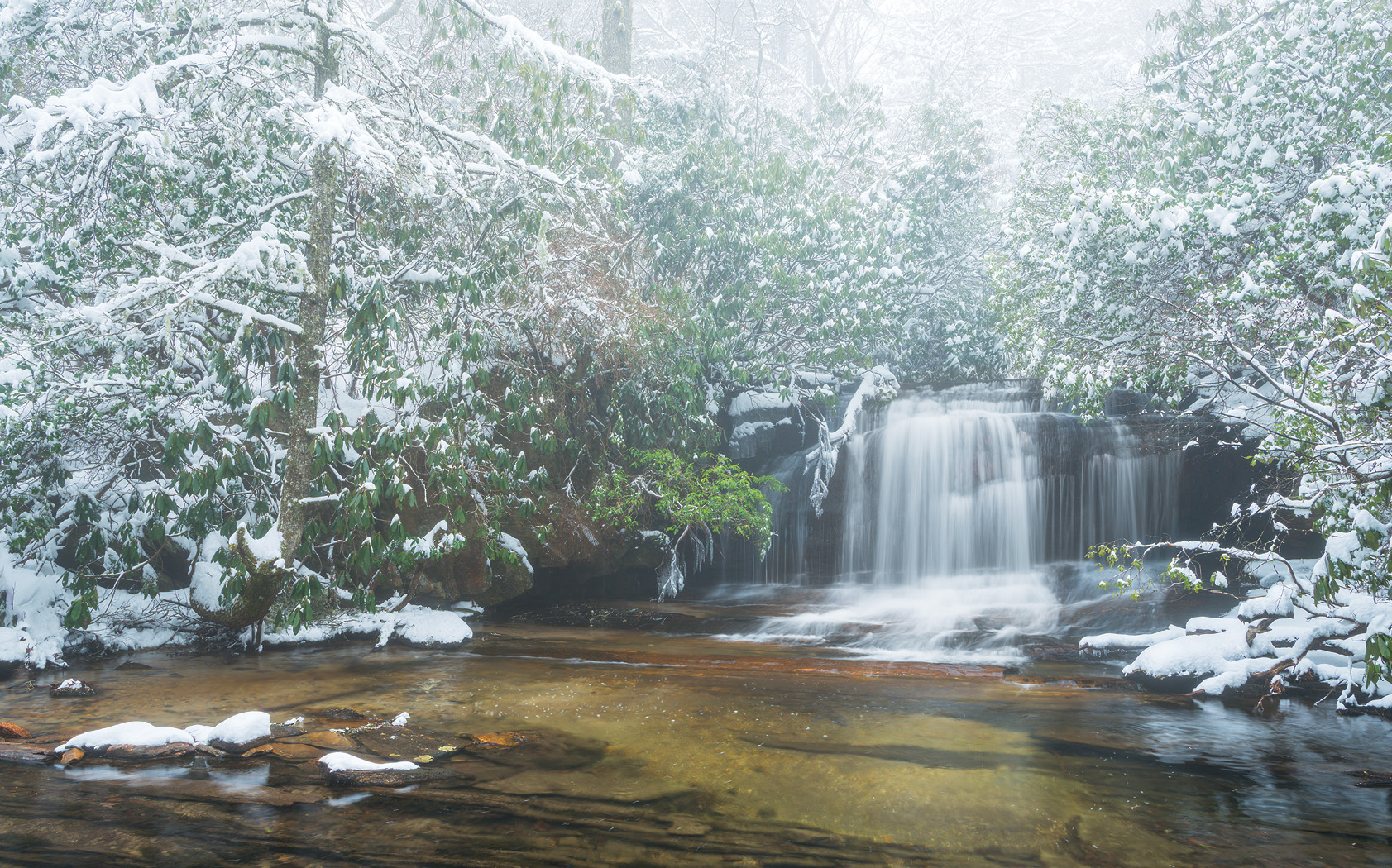 The Appeal of the Falls

Waterfalls, and the act of seeking them out, have helped countless people overcome difficulties, including substance abuse, depression, and marital problems, Adams says. The Keepers will explore ways to expose more people “to the incredible power that waterfalls have to affect people in a positive manner,” he says.

Waterfalls deserve such wide-ranging support because they are such a critical part of the state’s natural landscape, he adds. Adams discovered the wonder as a child thanks to his proto-waterfaller mother, Phoebe. “We didn’t go on many family vacations, but when we did, we went to the mountains to see waterfalls,” he says.

Adams began photographing them in the mid-1980s and in 1994 published the first edition of his lavishly illustrated guidebook, Waterfalls of North Carolina. The latest edition, published in 2017, includes formal listings of 300 waterfalls and mentions a total of about 1,000. But even that is far from a complete list.

“We’ll never see them all,” he says. “It’s impossible. There are just too many. I could probably go out every day for the rest of my life and find a new one.”

The number of people engaging in such quests has exploded in recent years, which means that it was no problem to recruit board members with valuable skills to offer. They include an environmental lawyer, a retired forest ranger, as well as Wiley, a longtime hiking blogger and nature photographer, and Rich Stevenson, whose website rivals Adams’ book as a comprehensive guide for waterfall seekers. Bass, the associate director, is a part-time math teacher who will lead the Junior Keepers program.

Adams cites several reasons for the growing interest in waterfalls, including improved guidebooks and websites, and social media that allow waterfallers to share reports of their trips. But at the core, it’s all about the mysteriously powerful draw of waterfalls. He doesn’t know the precise source of this appeal, he says, but suspects it might derive from waterfalls’ ability to “excite all the senses.”

They are clearly beautiful to look at, Adams says. Depending on the flow, they can produce an awe-inspiring roar or a calming trickle. “And we can smell that ionized air and feel the spray on our skin,” he says. “Everybody loves the waterfalls. Everybody. I don’t know of anyone who doesn’t like waterfalls.”

Visit the organization’s website for information on joining Waterfall Keepers and volunteering with cleanup, education, and other efforts. The group plans to stage its first major Waterfall Sweep on March 20.