Camping In: A reimagined ranch home in Brevard brings the outside in 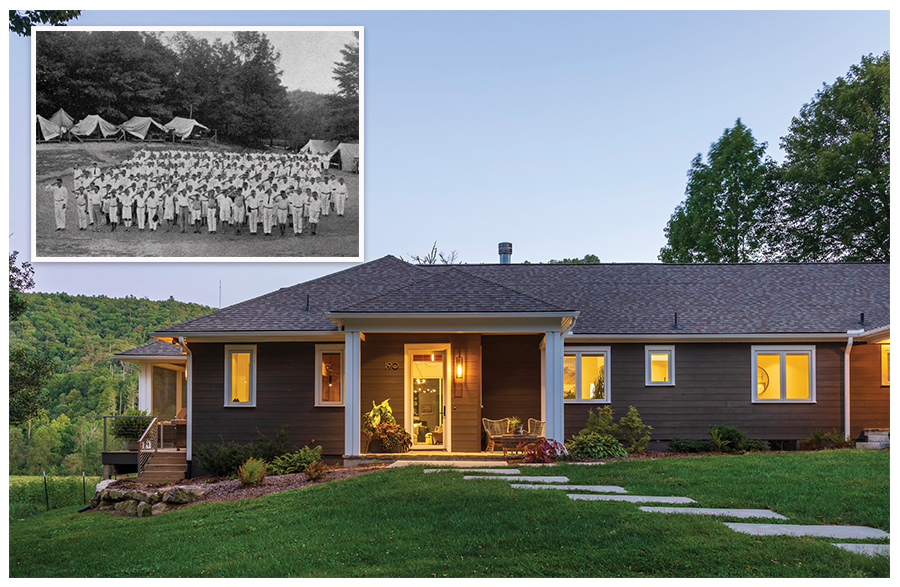 In the place where it stood for around two decades, there’s little evidence left of the French Broad Camp for Boys. Opened in 1913, it was the second of Transylvania County’s many summer camps, established by a pioneering educator who saw an opportunity to offer city-bound kids the benefits of the great outdoors. Positioned along the banks of the French Broad River outside Brevard, the camp took advantage of its 60 acres—later expanded to 200—to provide boys from all over the country with access to water sports, forest trails, and a private lake. There were two permanent buildings: a dining hall and a clubhouse for group meetings, music, and games. But the campers stayed in tents, allowing them to remain as close to the land as possible.

The camp closed in the 1930s and over time, the original buildings disappeared. The property became a lush river bottom farm. A brick ranch house capped the prospect overlooking the land. When the next generation of the family decided to sell, it was the views of the sloping fields, the wooded riverbank, and the mountains in the distance that attracted long-time Brevard residents John and Jackie Witherspoon. But the house in its original form—a 1950’s ranch with some native stone accents—didn’t take full advantage of its beautiful surroundings. With small windows and closed-off rooms, the property was tantalizingly close, yet out of view from inside the house. “You couldn’t see out of the house enough to appreciate where you were,” says John. The Witherspoons enlisted their friend Parker Platt of PLATT Architecture to reimagine what the home could be.

The Witherspoons and Platt have a longstanding relationship as a result of their real estate business partnership. Through years of dinners at his friend’s home, Platt “knew how we lived,” says John. That knowledge informed his approach to the renovation.

The placement of the home on the hill was “a real head-scratcher,” Platt says. “It was positioned almost backwards on the property,” with the front entrance in the rear. The property beyond is “too nice to turn your back on,” he says, so reorienting the house was a first step. He decided to preserve much of the original home, but to expand it in a way that takes advantage of the surroundings. The original front door, with its natural fieldstone facing, became a side door. The garage was transformed into a master suite. The kitchen became a laundry room. Each existing space was repurposed “in a highly functional way,” says Witherspoon. But Platt’s vision also involved some new additions.

Although he didn’t want to lose the home’s ranch aesthetic, Platt thought the wide, low horizontal profile could be achieved with a more modern look. The exterior of the old and new sections of the house are unified by a single color extending across the brick and wood paneling. The new section includes a welcoming entrance with a flagstone floor and cedar paneling, a look that Platt describes as rustic, but fresh. Natural finishes are used throughout the home to create a connection with the land—stone look tile and wood paneling in the powder room, horizontal wood paneling in the bedroom, and natural stone countertops in the kitchen. They’re contemporary, with a nod to both the rural surroundings and the home’s mid-century origins.

The original section of the house is accessed by several short steps to a narrow hallway, making the space intimate and separate. An old bedroom is now a small family living space, and there’s now an extra bedroom. An additional living space beyond has the original horizontal orientation of the ranch house, but showcases a view of the fields, woods, and mountains through sliding glass doors. A skylight in the kitchen diffuses the light, reducing glare so that the splendid view is seen at its best. The house uses solar panels from Sugar Hollow Solar, taking advantage of sun exposure on the hilltop.

But the pièce de la résistance of the renovation is the glassed-in back porch, featuring floor-to-ceiling windows rather than screens, allowing for an unimpeded view, John says. Here, the rolling fields—leased to a local farmer—and wooded riverbank can be truly appreciated. There’s a stone patio for even closer access to the wildflower meadow beyond the house before the cultivated farmland begins, and a deck for grilling in the great outdoors. 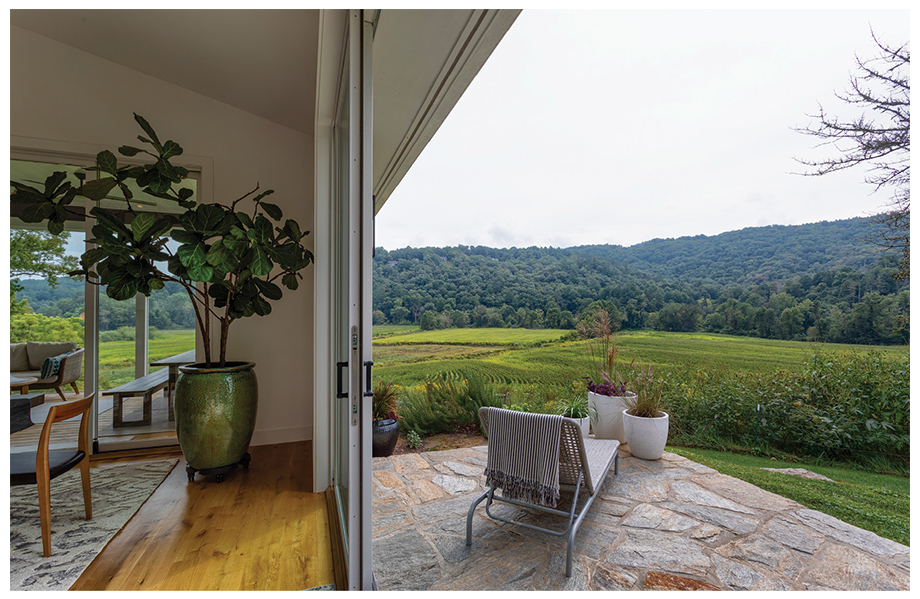 When he comes home from work, John says, he goes out with binoculars to get a look at the wildlife present all around—deer, water fowl, and many kinds of birds. “My kids tease me about it,” he says. But for a boy who grew up next to a cow pasture, it’s a kind of homecoming. There’s a trail down to the river and along its banks, giving the family access to this unique location that summer campers enjoyed so many years ago.

The house, Platt says, is now centered and open to the land.

In the early days of summer camps near Brevard, brochures promised families a respite from the city with “the pleasures and benefits of an outdoor life.” Here in the place where it all began, the Witherspoons have preserved part of that history. While the original camp buildings are long gone, the quiet spot by the river still offers that original splendor—fresh air, sunshine, bird song, and the mountains on the horizon.