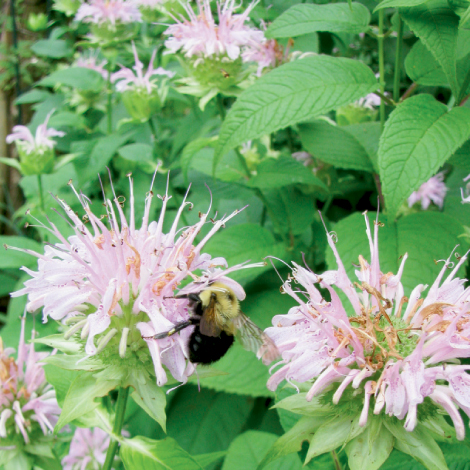 Here’s the buzz: Asheville is the nation’s first official Bee City USA, which means it supports a set of measures to promote sustainable habitats for bees. In the two years since Asheville City Council endorsed the idea, another 15 cities have explored similar programs. “If nothing else, we want people to know that the world’s pollinators need habitat, i.e., flowers,” explains Phyllis Stiles, director of the local Bee City USA program. “It seems like a small act, but if lots of us plant native, pesticide-free flowers, it will create large-scale change for thousands of pollinator species at risk.”

Although honey bees—and their precipitously declining numbers—get a lot of press, there are actually some 20,000 bee species worldwide, and together they pollinate the vast majority of flowers and fruits. We depend on bees for much of our food production; that’s pretty simple. Not so simple are the relationships between specific bees and plants, which have evolved over eons. For example, some flowers open to release their pollen only when a bee approaches and hums at a precise frequency, an adaptation called “buzz pollination.”

For bees, pollen holds crucial stores of protein and carbohydrates, which help sustain colonies through cold winter months. Careful landscaping with only native plant species—not imported exotics—provides that nutrition. “Bees are like us; they want to eat every day,” says Stiles. “It’s crucial to plant a succession of flowers from early spring throughout the growing season.”

Stiles calls beekeepers “the most optimistic people in the world.” And indeed, instead of simply lamenting any decline in bee health, they offer numerous resources that even nonbeekeepers can use to help protect the pollinators.

• Use only native Appalachian plant species.
• Plant flowers, trees, and shrubs that bloom very early and
very late in the growing season.
• Plant flowers grouped in clumps for easy visibility as bees
fly past.
• Reduce or eliminate pesticide use in the garden.
• Leave some cut branches and brush undisturbed for
pollinators to overwinter.

Join the Hive!
The group will cohost a daylong Pollinator Conservation Planning workshop on March 7 at the University of North Carolina at Asheville. To register for the course, which features expert instructors and costs $45, visit beecityusa.org.