Brain Boosters: Step aside, kids. The Catawba Science Center is giving grown-ups a chance to experiment after hours 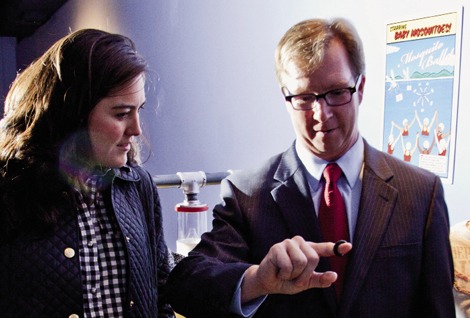 I’ll feel it. i don’t care,” said one woman as audience members at the Catawba Science Center queued up to hold a bloodsucking leech. The creepy crawler stayed in some hands longer than others, until one woman, after several attempts to dislodge it, laughed and said, “He loves me.” As people took turns holding the little bloodsucker, curiosity replaced disgust and open-mindedness trumped revulsion. “They’re kind of cool,” encouraged Dr. Gregory Swank, who led the evening’s program for adults. Swank and the leeches were the center of attention at the museum’s inaugural Science Café, one of a series of interactive discussions that make science more fun for adults by taking it out of the classroom and into coffee shops and bars. Swank and other surgeons are boosting the creature’s reputation. Once prized as a medical treatment for ailments ranging from headaches to hemorrhoids, then reviled, leeches are making a comeback as an aid in the reattachment of severed body parts. Bringing such scientific insight to audiences is the goal of Science Cafés, which are catching on across the country. NOVA scienceNOW, created by the producers of the PBS series NOVA, provides video clips that are augmented by experts’ input. January 11 marks the next café in Hickory, when clinical psychologist Dr. Gordon Cappelletty will discuss sleep and dreams. The Catawba museum offers other after-hours opportunities for adults. The three-year-old Science After Dark series presents lectures and hands-on experiences at the center, covering topics such beer tasting, winemaking, and organic gardening, as well as laser light shows in the planetarium. It’s all an effort to educate and, in the case of the leeches, dislodge old perceptions with new discoveries.