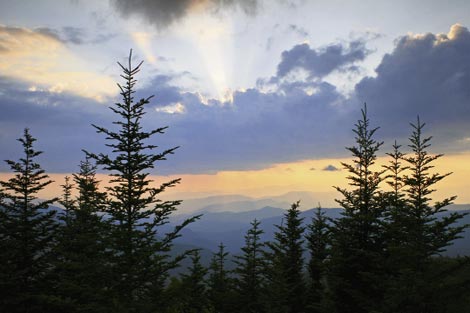 Cresting a few stories shy of 6,000 feet, the rugged peak of Blackrock Mountain is a relatively unsung summit amid the loftier knobs of the Plott Balsam Range in Jackson County. But the 3,000-foot climb rewards with an unobstructed panorama that includes an all-star lineup of peaks spanning from Clingmans Dome in the Smokies to Mount Pisgah.

From the lot at Pinnacle Park near Sylva, begin up the rocky, well-marked trail, following purple and yellow blazes—the school colors of Western Carolina University, whose students maintain the path. Sidestep the well-worn route to Pinnacle Peak by turning right in a half mile onto East Fork Trail, which steeply climbs a wooded ravine. In two miles, meet the West Fork Trail and head right. The path winds for a mile, then ascends a steep, 0.6-mile path on a forested ridge. Follow the western edge of the Nature Conservancy’s Plott Balsam Preserve to reach the two craggy knobs of Blackrock Mountain, so named, presumably, for the dark mosaic of lichens and moss that cover the rocks.