Home /Birth of a Slogan

Birth of a Slogan

Birth of a Slogan: Tracing the origin of WNC’s preeminent marketing phrase, Land of the Sky 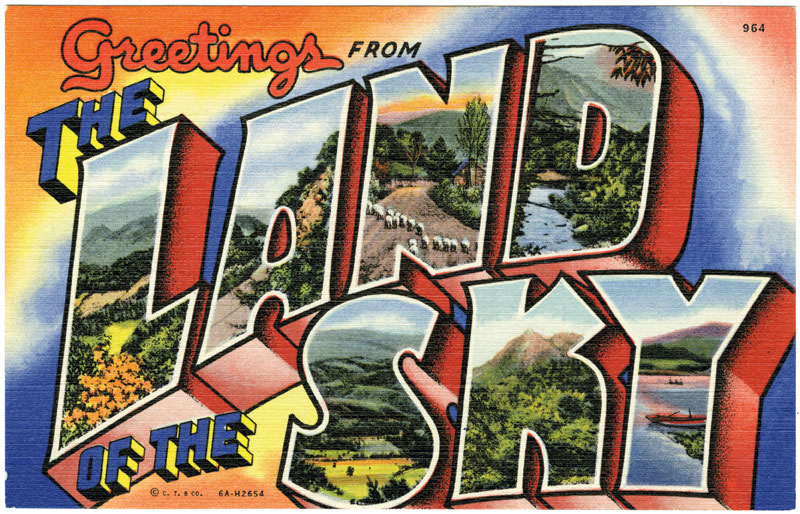 As lofty descriptors go, “Land of the Sky” seems a perfect fit for Western North Carolina, but the history of how it was coined is surprisingly little known.

It wasn’t the first attempt to promote the mountain region with a turn of phrase, and some of the earliest stabs at the task didn’t stick. “The Switzerland of America” never felt quite right, and “Nature’s Trundle Bed of Recuperation for Tourist and Health Seeker” didn’t have much zing, though Asheville-based ad men floated both formulations in the late 1800s.

In fact, it took a Salisbury, North Carolina-born writer to pin the Land of the Sky on WNC. Frances Fisher Tiernan (1846-1920), using the pen name Christian Reid, wrote more than 50 novels, many of which romanticized travel to points near and far. One of her most popular books was set squarely in WNC: The Land of the Sky; or, Adventures in Mountain By-Ways, was published in 1875.

The novel followed the adventures of four young travelers who found a world of wonders during a summer traipsing around the mountains, where they took in the breathtaking views and crossed paths with all manner of local residents. Early in the book, a main character describes the region as a key destination, saying, “If you want fresh air and glorious scenery—the greatest this side of the Yosemite—you must go to Western North Carolina to find them.”

Today, most readers would probably find the book an arduous journey. “The characters are flat, the dialogue stilted, and the plot formulaic,” Western Carolina University history professor Richard Starnes wrote in his 2005 book Creating the Land of the Sky: Tourism and Society in Western North Carolina.

But the notion of the Land of the Sky was here to stay. Within just a few years, the catchphrase became a staple in ads for mountain railway trips, hotels, and other businesses while gracing an untold number of postcards highlighting the region. In time, it was incorporated into the names of churches, dance troupes, regional government bodies, and even Asheville’s television station, WLOS.

“Despite its literary shortcomings,” Starnes noted, “Tiernan’s novel developed themes and images others would use to construct a regional tourism image for Western North Carolina.” In a land where the sky commands so much attention, Tiernan gave the place a name as fitting now as it was in her time.