Birds of Spring: Get up close and personal with the season’s most striking feathered friends 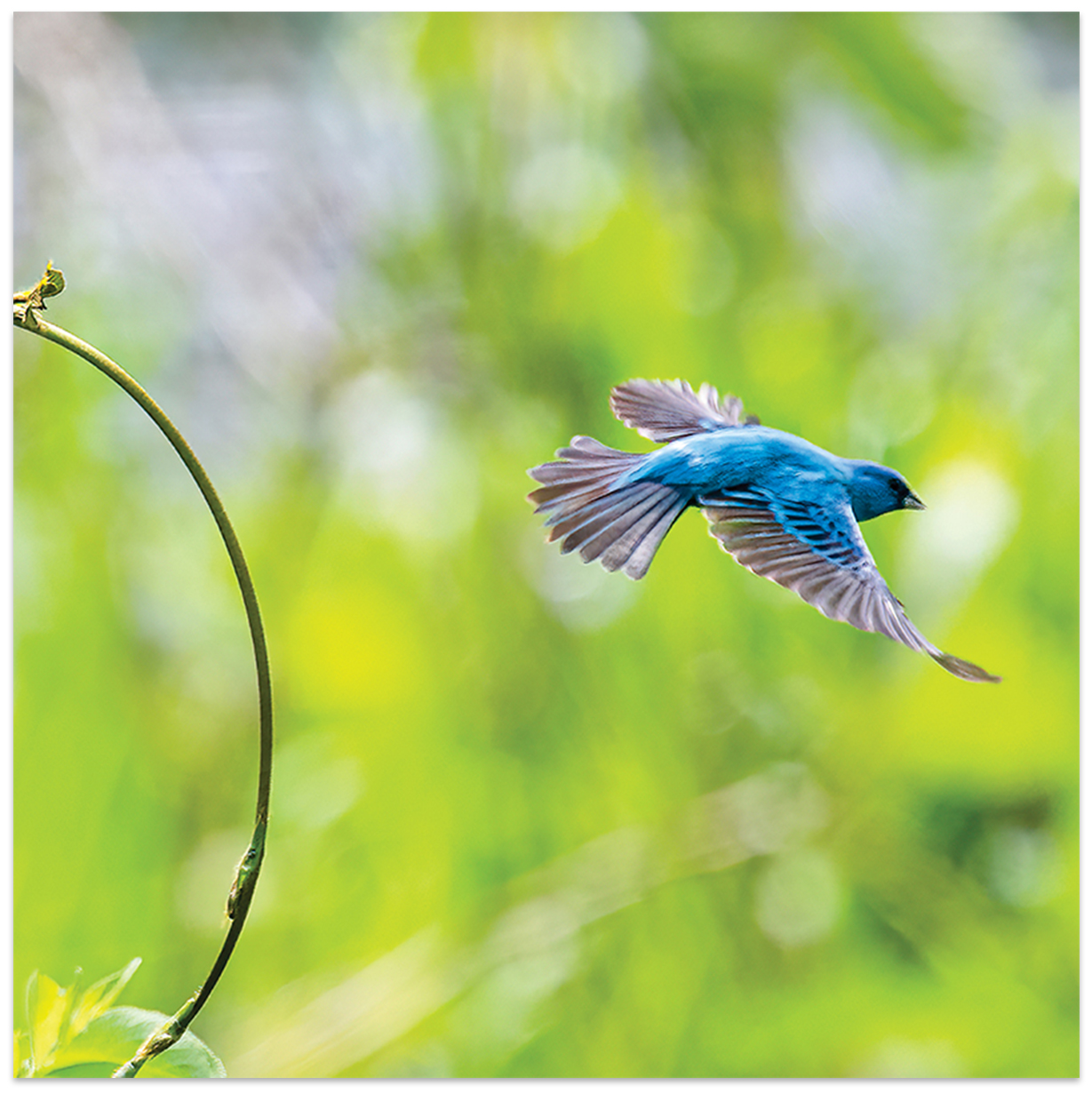 From the High Country to the South Carolina border, the landscape of Western North Carolina is unlike any other. It’s home to a diverse population of plants and animals, and because of its unique habitats, it’s also a sanctuary for millions of birds that live and migrate here in the springtime. Tom Tribble, at-large director of the Blue Ridge Audubon Society, says there are several main factors that make North Carolina a most conducive spot for spring birdwatching. “There’s a lot of protected land which provides a place for birds to feed and stop to rest, or to breed,” he notes. North Carolina has over 40 spots that are a part of its protected state park system. And WNC is home to both the Blue Ridge and Smoky mountains, as well as five major river basins.

The mountains can trace their roots as a bird haven back to the Ice Age. If you were to look at a map of the migration pattern of many of the birds featured here, you’d notice that many of them only live in or migrate to the far west of the state. That’s because this region experienced a large influx of new plant growth after the Ice Age that other parts of the East Coast didn’t, which attracted birds to visit or relocate. Over the Appalachian Mountains there is what birders call a “flyway,” a path used over and over by birds during migration. WNC is in the direct path of the Atlantic Flyway. “We get millions of birds that fly through Western North Carolina in the spring as they’re heading north, and in the fall as they’re heading south, so it makes it into a wonderful birding area,” says Tribble.

A cornucopia of colorful and vocal birds are out and about this spring. In the following pages, discover a sampling of their unique traits and tips on where to find them. 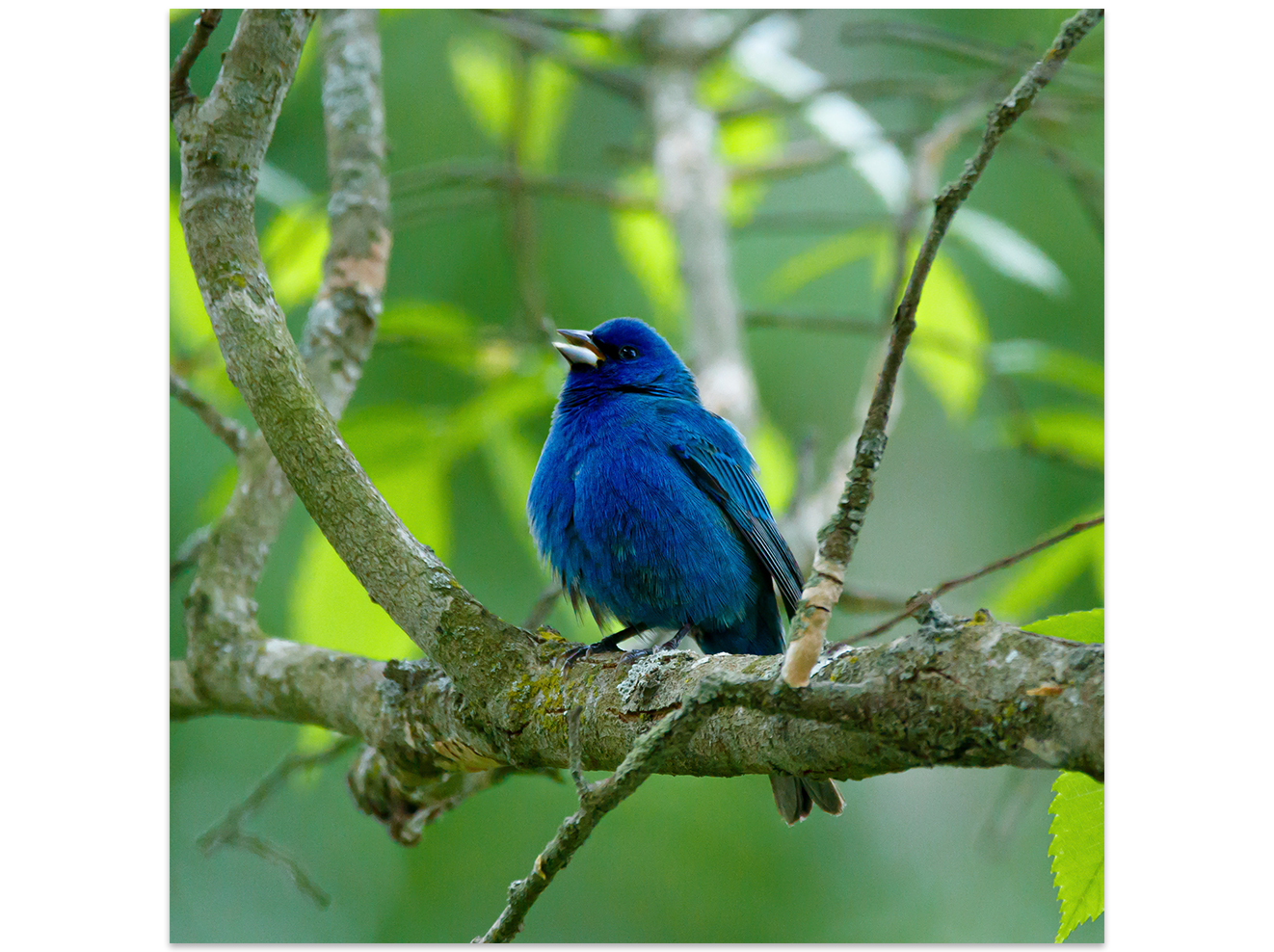 Often called “blue canaries,” the male Indigo Bunting’s distinctive cobalt hue adds unique splashes of color to the mountains in spring. When not in flight, these sparrow-sized buntings tend to hop around on reeds and plant stems. Their vibrancy, while attractive to female birds, may be a contributing factor to their slowly decreasing (but still abundant) population because it catches the eye of poachers. Since 1966, their populations have decreased by some 30 percent as urbanization and climate change have reduced their habitats.

Find them:  Indigo Buntings are easy to spot in shrubbery and weeds as they hunt insects. They’re also very attracted to backyard feeders with small seeds or even mealworms, and are commonly seen along rural roads and on power lines. Local birding groups observe Indigo Buntings at Warren Wilson College in Swannanoa.

Cool fact: These eye-catching birds are celestial navigators. Since they migrate at night, much like travelers of the past they rely on the stars to direct them to their destination. 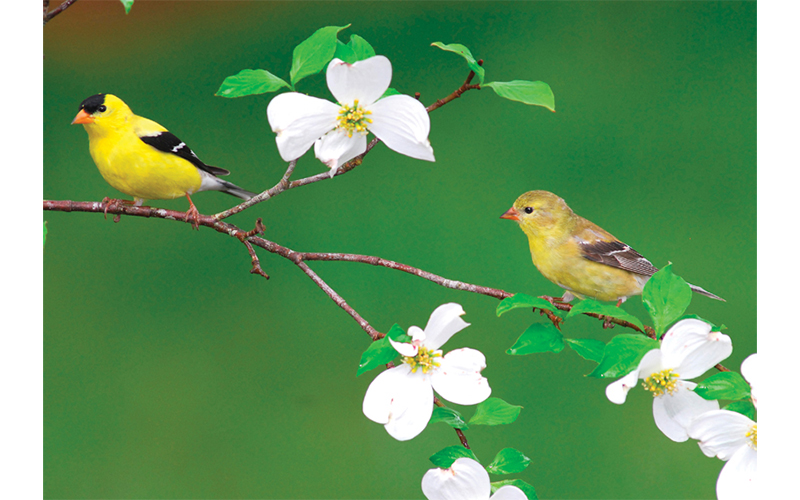 The newly molted bright yellow of the American Goldfinch signals incoming warm weather, a welcome signal that spring is approaching. This songbird is on the smaller side and is acrobatic in flight. Its call is unique and sounds remarkably similar to a popular snack food—po-ta-to-chip.

Find them: You’ll know you’re on the right track when you hear the American Goldfinch’s signature flight call. Scan open country fields, avoiding deep wooded areas, to find them. Or for a backyard encounter, place sunflower seeds in a feeder or on the ground to lure them.

One of the more common types of birds in Western North Carolina, warblers are small songbirds that can be found all over. There are two main varieties: Old World Warblers and New World Warblers, with the most common type in the US being New World. They are small, round, and wear many different colors. 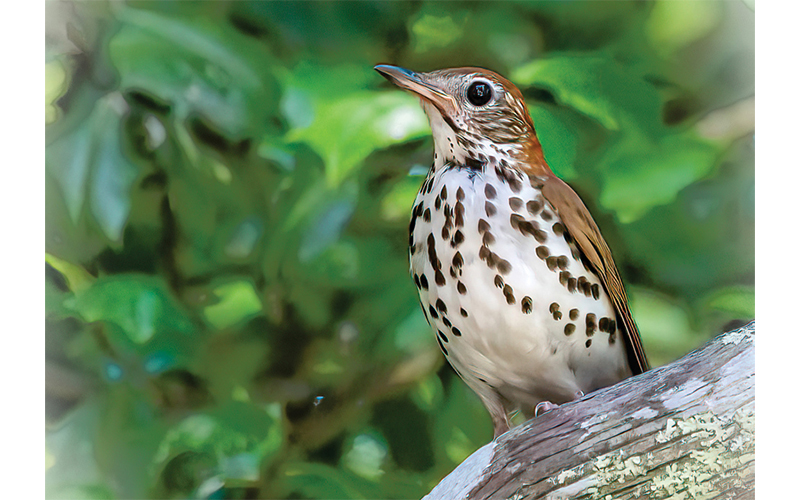 The Wood Thrush is a speckled, olive-colored songbird found in the forests of Western North Carolina. Consuming small invertebrates and other fruits found deep in the woods, this bird is a remarkable forager.

Find them: Unfortunately, it may be hard to observe a Wood Thrush due to their staggering decline—since 1966, there has been a 62 percent decrease in their population, partly due to climate change and habitat fragmentation. But if you’re ready to go exploring for one, you’re most likely to find them lower to the ground in forested areas. Listen for their ee-oh-lay call to determine if you’re in the right place.

cool fact: Because of its unique voice box, the Wood Thrush is able to harmonize with itself, using its music to ward off rivals and communicate with friendly neighbors. 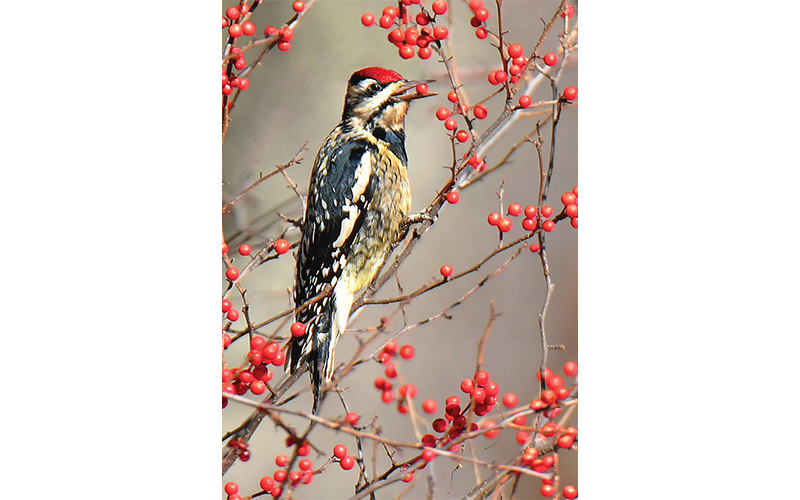 The echoing, drum-like sound of this woodpecker is its calling card for bird watchers. Because of its specialized tongue, the Sapsucker is able to feed on sap and insects concealed within trees. They are primarily black and white but sport a carmine cap that makes them easy to identify.

BackYard Tips or Find this bird: Sapsuckers aren’t typically interested in visiting backyard bird feeders, but if you’re lucky enough to have maples or birches nearby, you may be able to hear them pecking for syrup. Find them in higher elevations and forests during the warmer months.

Cool Fact: Whether or not a good tree is handy, Sapsuckers are also known to rapid-fire peck on metal poles and signs as well—not for food but to sound out its territory. 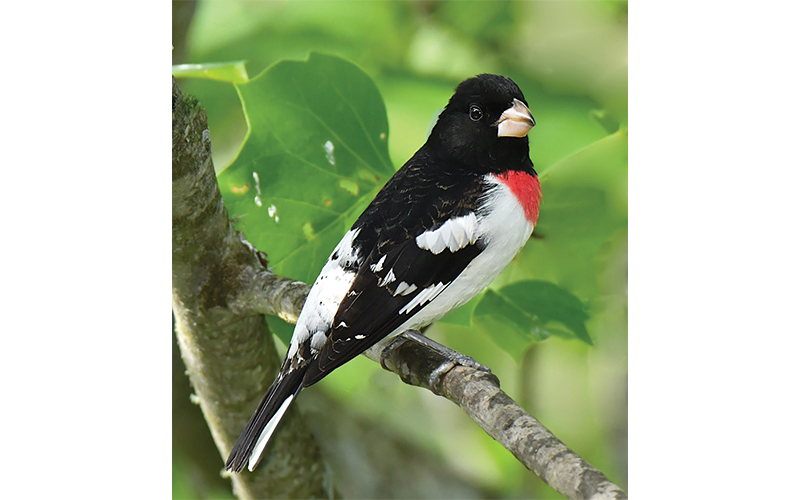 Distinctly marked with a ruby-colored chest, Rose-breasted Grosbeaks are stocky songbirds that feed on fruits, seeds, and insects. They are commonly found foraging in foliage, but for a surefire signal these songbirds are nearby, listen for their distinct chink chirps.

Find them: Driving along the Blue Ridge Parkway, you’re likely to spot the red-chested, robin-sized Grosbeak. But if you want a view from your backyard, place sunflower seeds and raw peanuts into a feeder. They’re known to frequent feeders as long as their favorites are stocked.

Cool Facts: While they are expert fliers, the Rose-breasted Grosbeak’s building skills are subpar. Because of their poor construction skills, you can often see their eggs through the bottom of their nests. 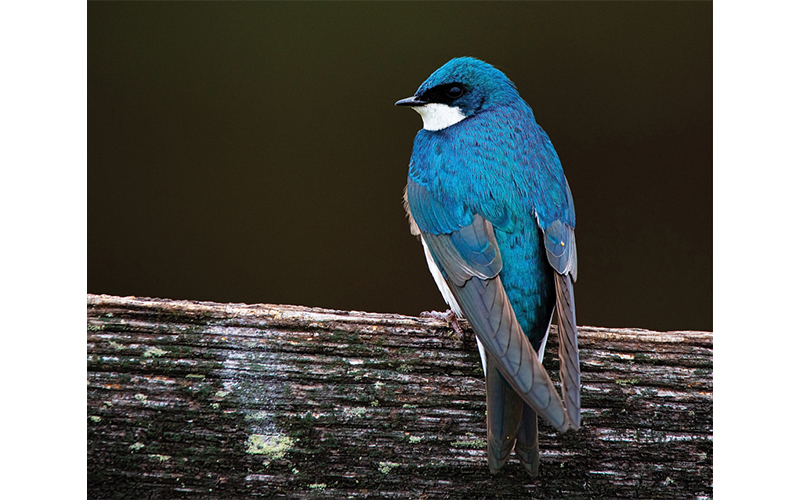 If you notice a small cerulean blue songbird and hear it chirp and gurgle, then chances are you’ve identified a Tree Swallow. Highly social and often found in pairs as part of larger flocks, they’re highly adaptable to cold weather—they’re able to eat both insects and plant matter, which means that they can find food in warm or cold weather.

BackYard Tips or Find this bird: Although Tree Swallows are most likely to be found in open fields or near bodies of water, you can still lure them to your backyard with nesting boxes. Local birdwatchers say they often see them fluttering over Beaver Lake in Asheville and Charles D. Owen Park along the Swannanoa River. 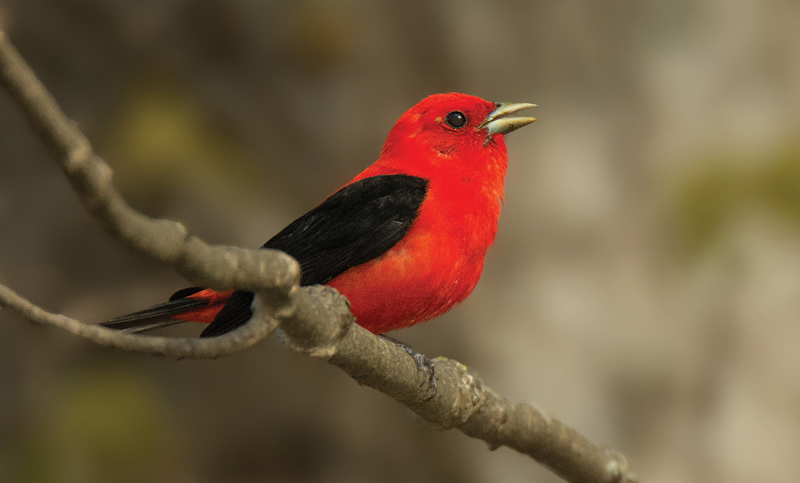 In spring, male Scarlet Tanagers shed their yellow-green feathers for a bold and bright vermillion red just in time for breeding season. Since they’re long-distance migrants, they are strong fliers and foragers. Their call, chick-burr, is unmistakably lively and makes for a great identification tool if you can’t get a visual on them.

Find them: Despite the bird’s striking red and jet-black feathers, Scarlet Tanagers can still be hard to spot because they prefer to be at  a high altitude unless they’re searching for food. They’ll flock to many different types of plants and insects, but some of their favorites are strawberries and ants. Go to a higher elevation along the Blue Ridge Parkway for a better chance of finding them in the wild.

Cool Fact: A medium-sized songbird that's part of the cardinal family, the males are flaming red in spring and summer, with black wings and tails, while the females are yellowish and olive. Interestingly, they often raise baby Brown-headed Cowbirds alongside their own young, even going as far as attacking mother Cowbirds to take their eggs. 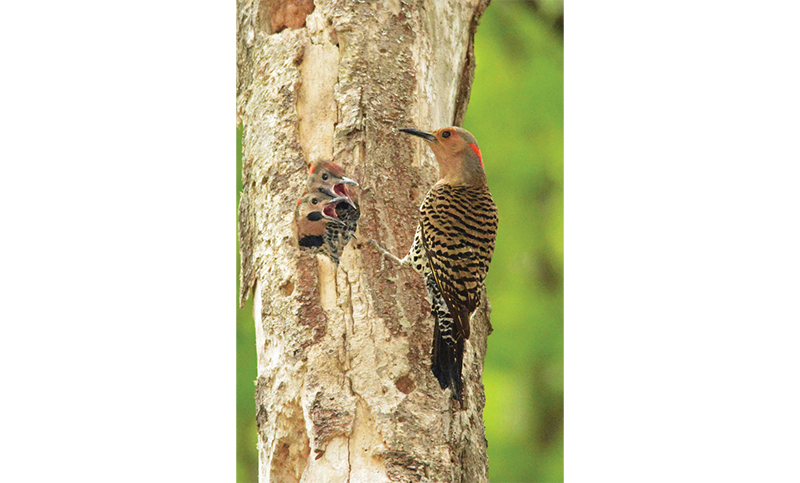 A member of the woodpecker family, Northern Flickers are insectivorous and will hunt both in trees and on the ground. Not only is its preference for ground-level foraging strange for a woodpecker, but the Northern Flicker also has a very distinctive feather pattern. They’re covered in black polka dots, and here in North Carolina, they have a bright yellow wing shaft.

Find them:  Attract Northern Flickers with nesting boxes and bird baths. They’re common in the mountains and can be found along the edge of wooded areas. Listen out for their drumming sound.

Cool Fact: Unlike most woodpeckers in North America, the Northern Flicker is highly migratory.

Carolina Bird Club: This nonprofit connects birdwatchers and enthusiasts from both of the Carolinas while supporting wildlife education and study. Learn more at carolinabirdclub.org.

NC Birding Trail: For an independent birdwatching experience, stop by any of the locations along the North Carolina Birding Trail, a statewide map and resource guide developed by the North Carolina Wildlife Resources Commission. It shows the way to dozens of sites in the mountains that are prime grounds for spotting particular birds. Find it online at ncbirdingtrail.org.