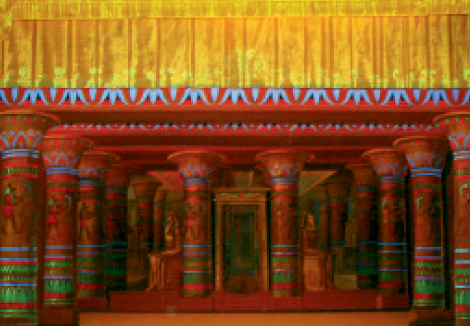 Like a fairy tale character waking from a long slumber, the Masonic Temple in Asheville has thrown open its hallowed doors to reveal a lighter, brighter side. The building was designed by Biltmore House architect and Master Mason Richard Sharp Smith and completed in 1915. Today, it’s an architectural rarity because it has remained virtually unchanged for nearly a century.

Once the exclusive domain of Masons, a centuries old fraternal organization, the 37,000-square-foot brick structure on Broadway Street is now available to rent as performance space. Groups are signing up to take advantage of a 200-seat theater with 45 original hand-painted sets, superb acoustics, and a large dance floor. Among them are Asheville’s Shakespearean theater troupe the Montford Park Players, who have made the temple their winter home.

“There’s an ineffable magic about the theater,” says John Russell, managing director of the players. “The way the human voice expands to fill the space, the ethereal beauty of the backdrops, the sensation of walking in the footsteps of Asheville’s best and brightest from a century ago, all combine to fill one with a feeling akin to walking in an ancient cathedral.”
(828) 252-3924; www.masonic118.com