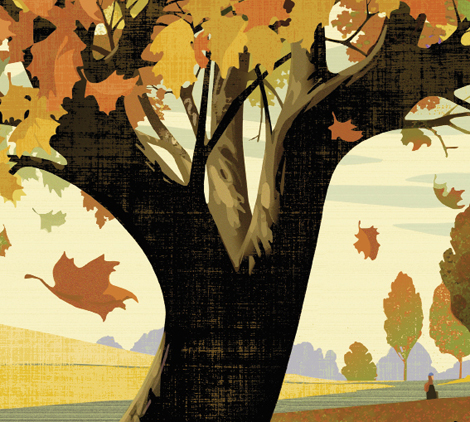 The annual frenzy of anticipation leading up to peak leaf weekend—prognostications by weather experts, and hotlines and websites revealing up-to-the-minute beauty spots—never fails to amuse me. We all go a little crazy for that fleeting crimson-gold moment when every hillside and hollow blazes bright against a Carolina blue sky. Lowland tourists clog the Blue Ridge Parkway, and every hiker with a backcountry map hits a trail. It’s as though autumn lasts only a day or two: If it ain’t vivid orange, it ain’t fall.


I beg to differ. The way I see it, with 30 years of mountain autumns behind me, the season is far more subtle, longer, and varied than a single spectacular event. So relax. Fall is a gradual process that begins immediately after the last daylily blossom withers and falls in the third or fourth week of July. It ends when the air goes hard with cold in mid-December, and the first snowstorm knocks the last brown leaves off the branches.


This special season, my favorite, is a feast for the senses as well as a state of mind, signaling the turning of the year. It’s when I take stock of what I’ve accomplished outdoors since spring, and what I can look forward to during the cozy winter spent indoors.


I especially like the start of fall, when a pageant of tall wildflowers plays out in open fields and deeper in the forests. How I crave this time. The magical tapestry includes the dark purple spikes of New York ironweed, the lighter shades of asters, bull thistles reaching for the sky, the billowy mauve heads of Joe Pye weed, the electric yellow blooms of goldenrod, and the pale buttercream petals of evening primrose. There are the incomparable blood-red crowns of bee balm along shady creek banks, the tiny spotted orange droplets of jewelweed flowers, and the alluring blue dots of chicory.


The solid black-green of the woodlands in June gives way to tinges of gold as color starts to drain from the leaves, and the heat begins a slow, uneven retreat as it slithers toward lower elevations.


Now, I can think about hiking. It’s not so hot, and each excursion takes me closer to the first light frost—and to the next, more insistent—and then to the ice that will form on the edges of ponds and creeks, and to the snow that will line the trails.


Before moving here, I lived in California, the boggy Eastern seaboard, and the frigid upper Midwest. Autumn only came to higher elevations out West, and briefly; other seasons were defined by raking winds, the lack of rain, or fog. On the East Coast, fall was defined by rain, more rain, and the sudden loss of sodden leaves as Atlantic storms moved through. In Wisconsin, fall was brief and intense; it might last for only a few weeks, the dramatically short days sandwiched between a blasting hot summer and a long winter of constant snow and ice.


But in WNC, fall progresses in a kaleidoscope of sensory delights that tumble over each other in slightly different configurations. When my children were small, there was the distinctive crunch of a leaf pile as they jumped in, and their squeals of excitement as they emerged. There is always the delicious, sticky juice of fresh-pressed apples from the orchard, and the wonder of gleaming spiderwebs suspended across quiet trails. Best of all, always, the smell as autumn lingers: the mysterious, musky, damp-sweet aroma of leaves underfoot, dissolving into the next year’s soil.