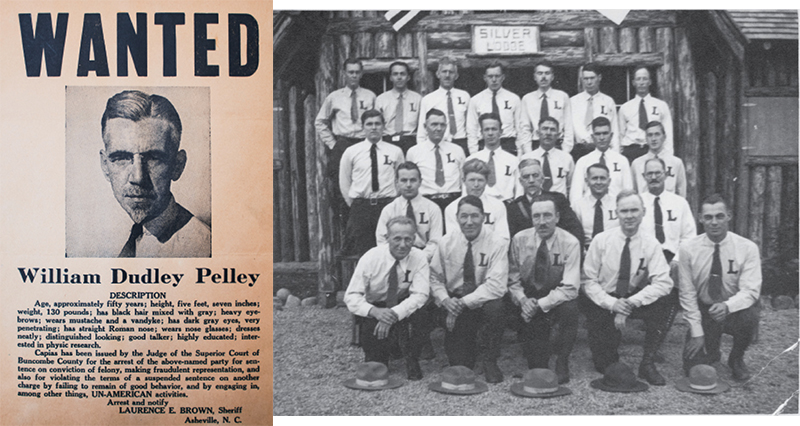 After years of efforts to foment fascism in the United States, Pelly was charged with sedition by federal authorities. Left, his local wanted poster; right, Pelley (in dark jacket) met with a Silver Shirt chapter in Washington state, one of the few hotbeds of his movement.

(Editor’s note: This is the first installment of WNC CONFIDENTIAL, a series on local history discoveries found in long-secret documents.)

When torch-bearing white nationalists marched in Charlottesville, Virginia, last August, leading to a murder and national soul searching, many shocked Americans asked, “How could this happen here?” Some answers might be found in the story of William Dudley Pelley, who waged a bizarre but partially potent pro-Nazi campaign from Asheville in the 1930s.

Long after Pelley’s stab at becoming a “self-styled Hitler,” as one FBI report dubbed him, his place in history is still emerging through documents that were either officially off-limits at the time or tucked away in hard-to-find places. Declassified records, along with a fairly recent biography and a growing online outpouring of historical details, are putting Pelley back in the spotlight and revealing how he made Asheville his headquarters of hate for the better part of a decade.

Rising on the right

Pelley was “one of the first Americans to create an organization celebrating the work of Adolf Hitler,” historian Scott Beekman noted in his deeply researched biography, William Dudley Pelley: A Life in Right-Wing Extremism and the Occult (Syracuse University Press, 2005). The book describes one of the strangest odysseys to ever take place in American politics.

Born to a poor family in Massachusetts in 1890, the energetic and driven Pelley carved out a solid career in the 1920s, first as a journalist and then as a magazine and screenplay writer in Hollywood. In 1928, however, his life was upended by a self-described “ecstatic interlude” while he slept. For what he called “seven minutes in eternity,” Pelley said he left his body and encountered oracles that called him to a greater, spiritualistic mission. 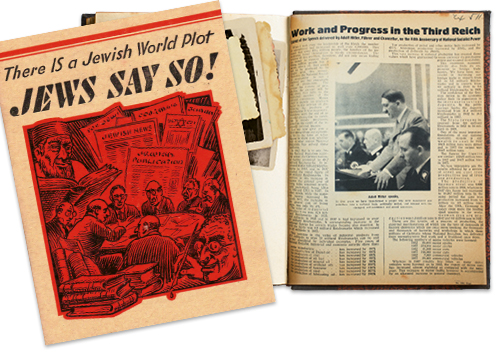 The court records of Pelley’s sedition trial, on file at Buncombe County’s Pack Memorial Library, include numerous examples of the anti-Semitic and pro-Nazi propaganda he either printed in Asheville or shared from his headquarters there.

Plunging into metaphysical matters, Pelley built a new following, and in 1930, he migrated to Asheville drawn by support from a wealthy local backer. He formed the short-lived Galahad College, an esoteric women’s school at a choice Charlotte Street address. The project was a flop, but Pelley’s move to establish a printing operation in Biltmore Village proved more successful, especially after he lurched into right-wing politics.

Pelley was working late in his office on January 31, 1933, when a local newspaper was delivered. In his autobiography, The Door to Revelation, Pelley recalled that he seized on the day’s word about Hitler’s successful takeover of Germany: “I looked at the lines. I read them again. I sought to comprehend them. Something clicked in my brain!”

Pelley had been watching Hitler for years, admiring the man who’d railed against the “Jewish menace” and muscled his way into power with a cadre of brown-shirted thugs. As a few of Pelley’s compatriots milled about his office, he looked up from the newspaper and made an announcement. “Tomorrow,” he declared, “we have the Silver Shirts!”

The Silver Legion of America, aka the Silver Shirts, was intended to be a “Gentile American Militia,” as Pelley soon put it in the group’s application materials. He envisioned a paramilitary organization that would spearhead a vaguely defined “Christian Commonwealth” in the United States guided by a strange amalgam of anti-Semitism, spiritualism, and blind allegiance to the Silver Shirts.

At its roots, Pelley’s movement mimicked Hitler’s, and the Silver Shirts did little to hide their fascist aspirations. Clad in tidy uniforms and forming chapters throughout the country, especially on the West Coast, the group signed up roughly 20,000 members, with untold numbers of sympathizers and a steady stream of invective from Pelley’s multiple publications, most of which were printed in Asheville.

The Silver Shirts, Pelley asserted, were fighting for “the purity of our race” and would “triumph in the ultimate contest for existence between Aryan mankind and Jewry.” His writings, one critic said in a 1934 New Republic article, became “a mad hodgepodge of mystic twaddle and reactionary, chauvinistic demagogy.” In 1936, Pelley made a pitiful run for the presidency, garnering just 1,598 votes in Washington state, the only state where he managed to get on the ballot. Around the same time, he was convicted in Buncombe County for various financial frauds, and the popular newspaper and radio commentator Walter Winchell dubbed the Silver Shirt leader “smelly Pelley.” 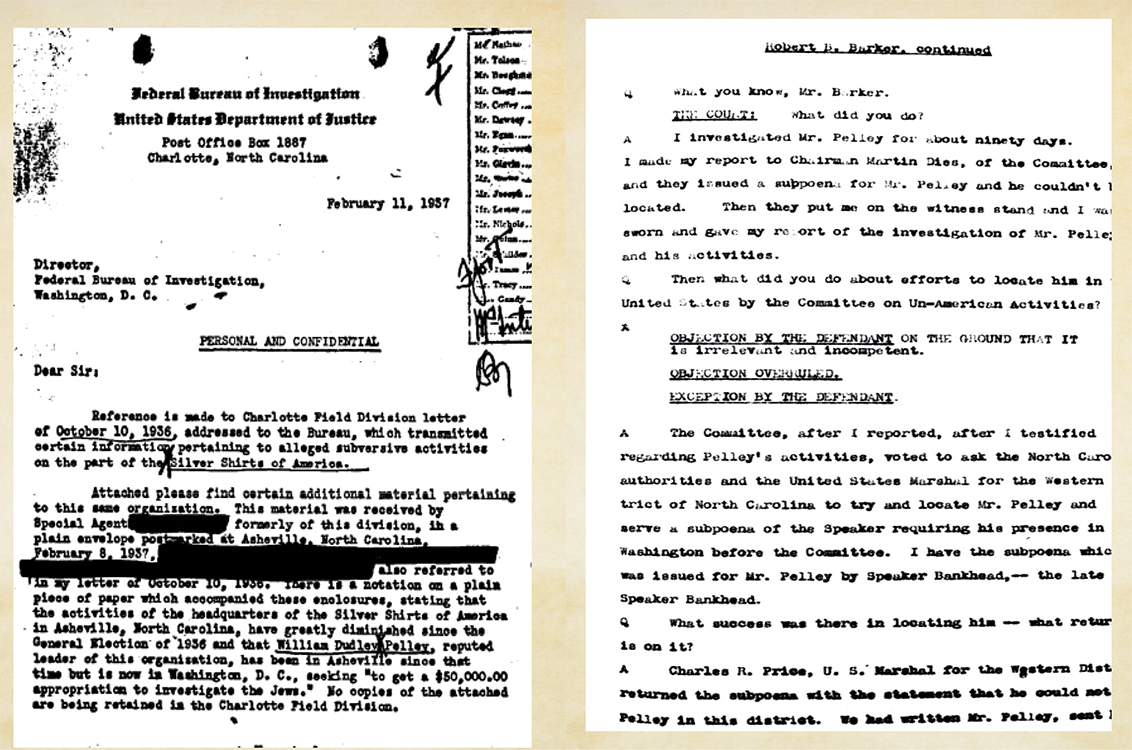 In the mid 1930s, the FBI began investigating Pelley and the Silver Shirts. This 1937 document from the bureau’s Charlotte office (left) reported anonymous tips about Pelley from a concerned citizen. Right, a transcript from an FBI agent’s testimony at Pelley’s sedition trial.

As his screeds continued to cross the country, Pelley increasingly drew attention from the federal government, especially as he made common cause with Hitler’s main backers in America like the German-American Bund, FBI documents show. Overtly, he spread pro-Nazi propaganda; covertly, the FBI found, the Silver Shirts injected anti-Semitism into various labor strikes around the country. By 1936, FBI agents in North Carolina were checking in on Pelley frequently and building a file on “alleged subversive activities on the part of the Silver Shirts.”

Ultimately, Pelley aroused the ire of President Franklin D. Roosevelt, whom Pelley accused of being a stooge of a Jewish worldwide conspiracy. In early 1942, with the United States fully engaged in battle against Nazi Germany, Roosevelt told FBI Director J. Edgar Hoover that Pelley’s propagandizing was “pretty close to being seditious” and instructed his attorney general to shut Pelley down. The FBI raided Pelley’s offices and arrested him, and a jury found him guilty on multiple charges of sedition. (While Pelley was on the stand, his attorney accidentally addressed the Silver Shirt leader as “Mr. Hitler.”)

Pelley’s treasonous run led him to a 15-year prison sentence, which he emerged from early and with characteristic aplomb in 1950. Settling in Indiana, he continued to preach his oddball gospels, now shed of politics and newly framed around UFOs and a theology he dubbed Soulcraft.

Until his dying day in 1965, Pelley spread his philosophies with a unique level of ingenuity and tenacity. That his ideas gained no great ground speaks well of both the United States and his home base in WNC. As an Asheville Times editorial put it: “We have seen the Silver Shirt movement for what it is. In laughing at it, we laugh at others who find it a menace to the Republic.”