Artist in Residence: Douglas Ellington and the rise of Art Deco in Asheville 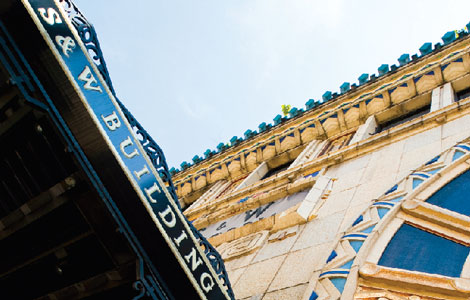 Renowned watercolorist Sallie Middleton hides a trademark blue feather within the details of each of her paintings. Her publisher has asked her to retire the signature mark altogether, but she refuses, claiming that it requires viewers to study her work more closely, even if for only a few more minutes. The visual game is intended to develop an appreciation in audiences for all the small elements that create the larger image.

It’s an artist’s device that’s been around much longer than Middleton. In fact, it surrounds her daily life—not in her work, but in her Chunn’s Cove home. The stone farmhouse, named the “most significant residence in America” by Architectural Digest in 1932, was designed by her uncle, Art Deco architecture icon Douglas Ellington. Like Middleton’s paintings, it includes unusual elements placed throughout. And like any good piece, it tells a story if you pay close attention. Some of the building materials came from each of Douglas’ large architectural endeavors around Asheville, including the city hall, S&W building, and First Baptist Church. And smaller elements around the house reflect his time spent in Western North Carolina.

As you approach the front of the home, Middleton points out a piece of a broken fiddle that has been incorporated into a decorative element above the entryway. “The man practically invented recycling,” she says. This home is Douglas’ whimsical masterpiece, and a structure that reveals quite a few details about the architect who helped stylize Asheville.

The Blueprint for Art Deco

The heart of the Art Deco architectural movement lasted less than 20 years, bridging the gap between World Wars. The style is typified by bold lines and reoccurring geometric patterns—a union of art and math that borrows from cubism and futurism. In short, it was the design philosophy that foreshadowed what would become one of mankind’s most radical centuries on record. The influence of the style can be seen in all corners of the United States, from the skyscrapers of New York City and Miami’s South Beach apartment buildings to the Griffith Observatory in Los Angeles and Coit Tower in San Francisco.

Douglas’ work in Asheville began when he and his brother and business partner Kenneth (Middleton’s father) arrived in town in 1925 after winning the job of designing and building Asheville’s First Baptist Church.
Douglas had studied architecture at Drexel University and the University of Pennsylvania before going to Paris to attend the École des Beaux-Arts, one of the premiere architecture institutes of the day. While there, he won the Paris Prize for structural design, and then became the first American to win the Prix de Rougevin for decorative architecture, a high honor at the prestigious school.

It was during this time and in this place that Art Nouveau’s organic style had run its course, and many of its former proponents, European artists like Hector Guimard and Eugène Grasset, began developing the next phase in popular design. Art Deco wasn’t just about buildings; it was eventually applied to furniture, sculpture, automobiles, advertisments, and almost anything that received a designer’s touch.

Upon returning to the United States, Douglas became a professor of architecture at Columbia University and the Carnegie Institute of Technology in Pittsburgh. After a stint working with the Navy to create camouflage patterns for its vessels during World War I, he went back to Pittsburgh to work as a private-practice architect. Eventually, Kenneth convinced him to return to the South—the Ellingtons grew up in Clayton, North Carolina, just southeast of Raleigh—to pitch his ideas for the First Baptist Church in Asheville. This move spurred an architectural golden age in the town’s history.

The green and rust-orange dome of the First Baptist Church, which welcomes visitors driving along the highway into downtown Asheville, gives the sense that the church is a long-standing and considerably weathered structure. In fact, Douglas designed the dome using a combination of purple, brown, red, ochre, and verdigris tiles to mimic the aged look of many Italian churches.

Approaching the front of the building, visitors are immediately struck by the huge lanterns flanking the gorgeous pink marble staircase. The entrance features three imposing wooden doors, each of which is decorated with the repeating geometric patterns that are a hallmark of the Art Deco style. Inside, the church features an ingenious melding of classic Christian symbols and Art Deco styling.

The ability to simulate natural surroundings in his buildings is another hallmark of Douglas’ work. This effect can be seen in the City Building of Asheville, the nation’s first Art Deco city hall. The gradually changing pink and red tones mirror the colors of the clay soil in the surrounding mountains and make the building feel like an extension of the landscape.

The pink Georgia marble that serves as the visual foundation of the First Baptist Church was also used to build the columns that support the Asheville City Building’s octagonal terra cotta roof—an image that now serves as a symbol of the city—as well as the building’s staircase and foundation.

Standing at a distance, viewers can see the symmetry of the three archways constructed with stunningly intricate tile work at the building’s entrance, above which are three rows of matching windows. Flanking the entrance are two decorative sculptures that mirror the feather-like elements seen at the top of the building.

Clearly, one of Douglas’ greatest joys as an architect stemmed from an ability to use local materials. He detailed his design of Asheville High School in an article published in The Architectural Record in September 1929, noting, “A very happy asset in the evolution of the design was the availability of a beautiful and unusual local granite known as ‘Balfour Pink,’ [found in] quarries near the adjoining city of Salisbury, North Carolina.”

This played into his original and elaborately planned color schemes. “The entire structure is roofed in tile of a deep variegated heather tone which harmonizes splendidly with the walls,” he said, describing the school. “In the central tower bands of tawny Airedale brick and blocks of ordinary rust-toned terra cotta flue lining are introduced for contrast…. All exterior gates, grilles and lighting fixtures are iron of natural finish. All road paving is pink granite.”

Some of the pink granite from the high school’s roadways found its way onto the wall above the Ellingtons’ fireplace. And Middleton points out the odd candlesticks that sit atop the mantle. They are nozzles salvaged from the hoses of a local fire station that was discarding its old equipment.

Nearly everything in the home came from materials left over from Douglas’ buildings or salvaged from worksites. For example, according to Middleton, the size and shape of the living room was determined by the number of ceiling beams saved from the razing of an old schoolhouse. She then points out the three windows along the largest wall—one huge window flanked by two smaller ones. It turns out that Douglas had one decorative window grille left over from the Asheville High School project, so he had the windows built to accommodate it.

Fragments of the Baptist church are instantly recognizable. Pink marble that was used to construct the foundation of the church has made its way into the home at Chunn’s Cove. The flooring, which is a mosaic of tiles, stones, and hardwood of various sizes, colors, and textures, commands the attention of visitors entering the room. Much of it is made up of tile samples and scraps of marble from previous jobs, and the large pieces of bright pink marble are a striking highlight.

What he originally found on this land in Chunn’s Cove was a small log cabin on a rolling landscape that he refused to alter. He did not want to use machinery to excavate the land, so any necessary leveling was done with shovels and picks.

Like the interior, the outer walls of the home are made of a series of carefully integrated materials. The original log cabin stands as one room of the home, and Douglas decided to use the beams throughout the building to help unify the structure. They were also create the staircase up to the bedroom, as well as the cantilever stairs that curve overhead in the living room.

The next section of the exterior of the home is constructed of stones and wood framing. Douglas purposely chose an inexperienced laborer to build the walls, and then taught the man to put the stones together haphazardly and with mediocre technique. He then recruited an Italian artisan who had been working in Asheville for the architect Rafael Guastavino (who had a hand in designing Biltmore House and the Basilica of St. Lawrence) to design and construct gorgeous stonework above each of the windows and doorways. According to Middleton, the architect wanted the inexperienced stone worker’s labor to set off the artisan’s skill.

It’s easy to imagine how Douglas lived in Chunn’s Cove as it was being built—Middleton has lived here on and off for nearly 80 years. Phone lines and electricity have been added, but all of the original hardware is still in place and much of the furniture is original to the home. A few pieces were actually made by Douglas, including a door’s windowpane constructed with colored glass bottle bottoms that fill the room with tinted light.

According to Middleton, when her father and Douglas were boys, they would walk on the beach collecting shells. While everyone else searched for perfect ones worth saving, Douglas would fill his pockets with shattered oyster shells and every other shiny fragment he could find. He would then make jewelry out of his bounty. Douglas, she says, was an artist at heart who “just happened to know a lot about building design.”

Indeed, his home, the place where Douglas often practiced his own watercolor painting until he passed away in 1960, has little in common with the monuments to Art Deco design that he’s so well-known for. The courthouse is a rigid testament to Carolina mountain peaks, but the farmhouse’s rough walls are made of local stone. The high school sprawls, while the farmhouse remains humble. And the Baptist church is a gift to the congregation, while the farmhouse is completely personal. His downtown projects reflected how he interpreted design for the public, but his home was built according to how he wanted to live.