Home /Art of the Carve

Art of the Carve

Art of the Carve: Make your best jack-o’-lantern yet with pro tips from carving expert Scott Garland 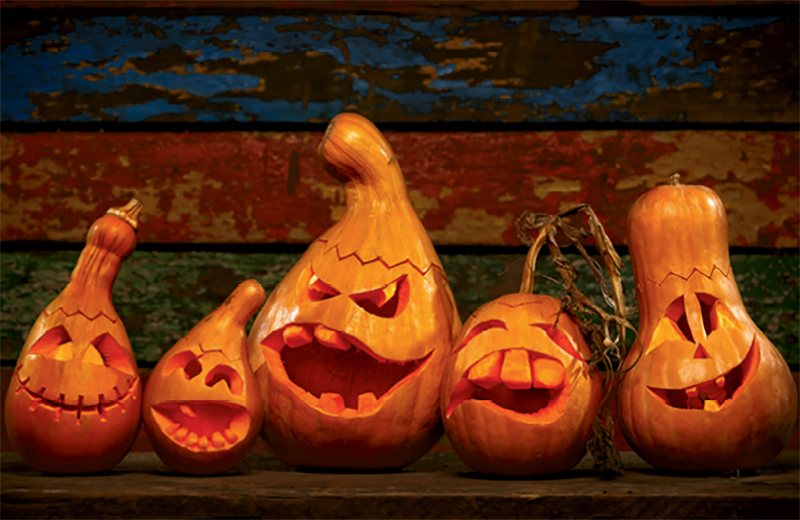 The ice-carving skills Scott Garland learned from the Culinary Institute of America in New York have transferred well to Halloween’s key icon. Long the reigning pumpkin champ of Biltmore’s annual employee pumpkin-carving contest, Garland has since given others a shot at winning; he now owns and manages Stonewalls Restaurant in Banner Elk, where he continues to display his talents. Garland offers tips for crafting your own masterpiece in one to two hours.

First things first: carving the perfect pumpkin starts with finding the perfect pumpkin. According to Garland, the best kinds are the ones that have plenty of character. He often peruses Asheville’s main farmers market for gourds that stand out, like white, green, or malformed specimens, or he procures his pumpkins from Mountain Rooster Produce in Banner Elk.

Next, utilize props to elevate your pumpkin and keep the carving simple. He recommends using a wax pencil rather than a permanent marker and using the Internet to find stencils. “Carving pumpkins is not about being artistic, it’s about being creative,” Garland says.

Follow your stenciled drawing with dotted incisions from a steel pick, then carve through with either an X-acto knife or a wood chisel. Add dimension by changing how deep or shallow your incision is.

Garland recommends using an LED candle, since a real candle can dry out the pumpkin quickly. To lock in moisture, rub olive oil along the carving incisions.

Avoid direct sun, bugs, and other critters by keeping your pumpkin in the refrigerator during the day, which will lock in freshness.

To use pumpkin remnants, roast the seeds for a snack or salad topping. Garland uses the pulp for a special seasonal bisque at Stonewalls.