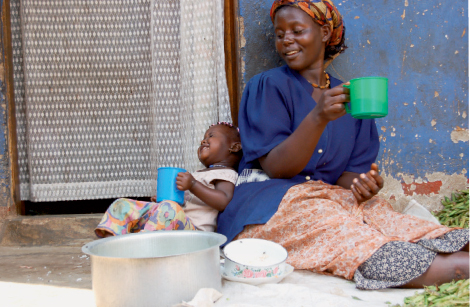 “Mountain values” is one of those overused terms that gets worn down during the political season here, but it actually has a real meaning. It’s a reference to the time, not that long ago, when Western North Carolina residents knew they were all in their struggles together—and helped each other accordingly. When your neighbor’s family was down, you lifted them back up.

The world is smaller today, but that spirit still exists in three locals—in their 20s and early 30s—who’ve made it their missions to help people in need around the world. Angel Cruz, Doc Hendley, and Brandon Raab didn’t sign up to be part of an aid agency. They each set out to make a difference the best way they knew how. Today, they work alongside the recipients of their assistance—teaching agriculture, providing clean water, and mentoring children in communities that need it the most.

With some know-how and a lot of work, Angel cruz helps a village Nourish body and soul Twenty miles northwest of the capital city of San Salvador lies the community of Los Naranjos, a settlement of roughly 200 people who live among volcanic peaks and steep valleys of El Salvador’s La Libertad state. The setting is lush and tropical, with groves of rustling banana trees, dense forests, and brightly colored birds. But outward appearances conceal a desperate set of facts: Most of Los Naranjos’ residents live in a state of perpetual malnourishment, without medical care, schools, electricity, and even adequate drinking water.

When Burnsville native Angel Cruz arrived here two summers ago, she brought with her a grand plan. As an intern with a Salvadoran sustainable development nonprofit, she would seek organic certification for the community’s small agricultural cooperative, a distinction that would allow its residents to sell its crops at a premium. Reality, though, had other plans for her.

The residents of Los Naranjos—most of whom settled here in the aftermath of the Salvadoran civil war in the 1990s—live in a paradox. They raise commodities for cash, but overlook their own needs, lacking the knowledge, experience, and time needed to grow the staples of good nutrition, namely vegetables, fruits, eggs, and poultry.

So Cruz refocused her internship on establishing a large organic garden for the community. Over six months and with many hundreds of work hours logged, Cruz and the residents carved a large garden into a brushy slope, installed terraces to prevent erosion, and cultivated the land with little in the way of tools but a machete and a hoe.

With a background in biology and the welcome counsel of a Salvadoran agronomist, the 2008 Furman University graduate taught residents the use and benefits of natural insecticides, compost, and organic fertilizers, and the value of crop rotation.

“For small farmers in these countries, sustainable means being sure of their next meal,” Cruz says. Today, the Los Naranjos garden yields cucumbers, onions, radishes, okra, peas, tomatoes, peppers, papaya, and a dozen other fruits and vegetables. The expectation is that the skills learned in the community garden can be adopted by individuals for use in their home gardens, and that harvest surpluses can be sold at market to provide supplemental income.

A Compton Mentor Fellowship allowed Cruz to return to Los Naranjos in the summer of 2008 and continue her work. Now she’s back again, this time with money saved, as well as donations from individual supporters who largely reside in Western North Carolina. Recently she sought funding for a chicken-production initiative and an additional teacher for the community’s first public school.

In the process she has endured infections, parasites, and other challenges of life in an impoverished land. “My first few weeks here were one of the hardest experiences of my life,” she admits. “To talk about living on a few dollars a day—without running water and electricity—is one thing, but to actually live it is a completely different experience.”

But despite the crushing poverty that surrounds Cruz, there is reason for hope. She sees it daily, in the children who have learned to tend vegetable patches, in the sight of tomato plants growing in discarded soda bottles, in the bumper crops of radishes and cilantro, and most of all, in the cooperative spirit that endures here alongside a degree of want and oppression most North Americans can hardly imagine.

“I wrote during my first visit to El Salvador that the people in Los Naranjos had broken my heart,” says Cruz. “But,” she is careful to add, “they are slowly helping me put it back together.” —Kent Priestley

A Miracle in Reverse

Wine to Water provides life’s most basic necessity to poverty-stricken areas More than one billion people in the world lack access to clean water. It’s a harrowing statistic, the kind of massive epidemic that seems unsolvable, even by the most far-reaching aid organizations. Yet Wine to Water, a Boone-based nonprofit, is steadily chipping away at that figure, providing sustainable water systems for more than 25,000 people in impoverished areas in the last six years. And it was all because of the efforts of one bartender.

In 2003, Doc Hendley started researching the water crisis after learning about the massive shortage. Motivated by the enormity of the problem and the lack of attention it received, Hendley put his skills to use for the cause—pouring wine and playing music. In early 2004, he organized a charity wine tasting at the bar in Raleigh where he served drinks and played guitar. “I couldn’t sleep one night, so I brought out a pad and pencil and started making a list of friends and bar owners I knew,” Hendley recalls. “And within one month we already had our first event planned.”

The event, which he called Wine to Water, was a success, and the first of many, as more restaurant and bar owners began hosting fund-raisers with him. Soon thousands of dollars had been donated to the cause.

Unsure of how to turn the money into drinkable water, Hendley considered donating it to an international aid organization. He visited the Samaritan’s Purse (Franklin Graham’s aid group) offices in Boone to interview Kenny Issacs, the director of international projects. Instead, Issacs ended up interviewing him; by the end of the conversation, Hendley had been offered a job. Samaritan’s Purse would send him into the field to learn the ropes of water sanitation work, and he could use the Wine to Water money to fund his own projects. “I told them I wanted to go to the place in the world that needed water the most, so they suggested I should go to Darfur.”

Hendley’s experiences in the war-ravaged nation offered him an eye-opening perspective on the complicated nature of the water crisis. The situation on the ground was grim, as warring factions cut off water supplies and attacked aid workers. In one incident, Hendley’s convoy was riddled by gunfire. “Water changed from my passion to the burden of my life,” Hendley says. “I don’t feel right doing anything else now.”

After returning from Sudan, Hendley spent three years working as an insurance salesman and musician in Boone, while volunteering his time with the growing organization he had founded. In 2007, Wine to Water officially achieved nonprofit status, and he took on the role of executive director full time, organizing more fund-raising parties in the United States and using the donations to continue his projects overseas.

The organization has focused on providing sustainable water systems. Efforts have included installing and repairing wells, providing water systems to orphanages, and distributing thousands of bio-sand filters. “We like to utilize local groups that are on the ground already,” Hendley says. “That way locals are being trained to do the work, which creates more ownership. It also stimulates the local economy, and saves massive amounts of money.”

With upcoming projects in Peru and Cambodia, Hendley’s efforts continue to reduce the staggering number of people who lack life’s most basic necessity, proving that one person can make a difference from across the world. —J. Hansbrough

Sol International gives kids in Roatan a place to belong Brandon Raab is the first to admit that he spent much of his school years in detention. If there was a rule he could break in the classroom, chances are he got caught doing it. It’s a point of pride that he laughs about now that he’s helped start a youth development program in Roatan, Honduras, called School of Life (SOL) International Foundation. “Whenever one of my kids tries to pull something over on me, I let them know, I’ve done it all,” says Raab, who holds a degree in education from the University of Georgia.

In 2005, he and Dave Elmore, a coworker from Stone Mountain Boarding School in Black Mountain, explored Central America on summer vacation. A few months later, Elmore decided to return and make a living on the small Caribbean island. The next time Raab came back for a visit, his friend was working for a private school.

“Whenever he took his students outside to play sports, I noticed there were always some other kids—not from the school—who would come over just to watch,” he says, noting the level of poverty on the island and a deficient public school system. “Because of the way things are run over there, many kids get only about 50 to 80 days of school each year.” The rest of the time is theirs to fill.

So Raab and Elmore approached the owners of Anthony’s Key Resort about using some dilapidated tennis courts on their property to host games and play sessions for the local children. The owner was receptive to the idea, and soon, dozens of kids were showing up to play soccer and basketball. Seeing the possibility of a positive influence in the community, many local businesses began raising funds, and the resort’s owner spent $25,000 to have stadium lights installed, so the program’s hours could be extended.

Today, Raab splits his year between Roatan and Asheville, Elmore stays on the island, and the foundation is more than just sports. The two began teaching lessons to augment what the children learn in school. “But that didn’t go over well at first,” says Raab. “So instead, we changed it around and said ‘you’re welcome to play if you want, but we’re also going to be doing some lessons.’ ” Giving kids the choice to get involved in things like reading and writing classes, English, math, or art projects had a powerful effect; he says that some days he doesn’t hear a single ball bouncing. The organization, which recently added a third employee, has also taken to assisting with the children’s health-care needs, as well as helping purchase school uniforms and supplies.

With the help of volunteers, SOL recently built a baseball field on donated land to start a little league—the island’s only organized sport for children. “That in itself has been a huge learning opportunity for our kids,” says Raab. “For many of them, this is the first chance to learn things like teamwork or taking instruction from a leader—all things that come into play later in life.” And he’s watched kids grow more mature because of it; those who would storm off the field in a fit of anger for being called out have learned to work through the negativity to become better team players. It’s a process Raab understands well. He’s been there. —Eric Seeger