Home /Along the Shatter Zone

Along the Shatter Zone

Along the Shatter Zone: Photographer Rob Amberg chronicles the raw beauty and complexities of everyday life in Madison County 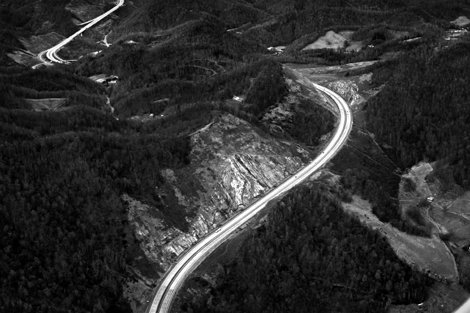 As long as there have been settlers there, Madison County has been a place of “refuge and resistance,” says photographer Rob Amberg. The Civil War was not welcome there, but those opposing it were. More than a century later, back-to-the-landers started arriving, finding it an ideal place to retreat from mainstream culture. Amberg was among that wave of newcomers, arriving in 1973 to find a different life than the one he’d grown up with in suburban Maryland. He’s spent the last 40 years photographing the county’s people as what he calls a “participant observer,” an embedded photographer with the kind of access that results in pictures that are tender but unsentimental, respectful yet unflinching.

Amberg’s photos have been collected in two books: Sodom Laurel Album, a chronicle of two decades in a small mountain community, and The New Road, a visual record of the construction of Interstate 26 that also includes oral histories and narrative essays. Amberg’s most recent images are part of a work-in-progress he calls ShatterZone. A geological term used to describe a fissure, the word has been adopted to reference borderlands where refugees go to escape political or economic pressures.

In the decades since Amberg arrived, Madison County has changed radically. The tobacco fields tended by many families ceased production with the federal tobacco buyout of the 1990s. This replaced not just a source of income but a way of life, and paved the way for more outside elements, some welcome, some not. Amberg’s photos capture the complexity of everyday life in Madison: the way old traditions are preserved but altered by new residents; the difficulty and joy of living off the land and close to the bone.

Strong stereotypes of the people in this region exist, Amberg notes, many of which have been reinforced by photographers. The wizened mountaineer, the magical sunset—such iconic images often promote either a sense of nostalgia or prejudice. Amberg shirks that kind of framing by getting close to his subjects, capturing fleeting moments and imbuing them with meaning. The results aren’t the product of professional training, but rather genuine relationships. “If I project comfort, they’re comfortable showing themselves to me,” he says. “They have to trust how I am going to represent them.”

“For some, intimacy with a subject becomes a veil that makes it impossible to see clearly,” says Asheville photographer Ralph Burns, who recently curated an exhibition of Amberg’s work at the Asheville Area Arts Council. “For Rob, that closeness is an open door. He doesn’t work in the margins. His work reflects life very directly.”

Until just a few years ago, Amberg shot only on film, but now he shoots both digital and film, printing digitally. And while he may initially shoot in color, he’ll often switch to black and white for printing. “I’ve always felt color is a major distraction to understanding the emotion and content in a particular image,” he says. “I’ve seen amazing color documentary work that’s very expressive, but my heart and eyes continue to feel and see in black and white.”

Amberg recently completed a yearlong residency as a visiting artist at Duke University. He received a Guggenheim Fellowship in 1990, in addition to grants from the National Endowment for the Humanities, the North Carolina Humanities Council, the Center for Documentary Studies, and other prestigious sources. But he can’t allow the accolades to make him aloof.

“You can do this work without becoming part of the community,” he says, “but for me, it’s pretty personal. These are my neighbors and friends.”